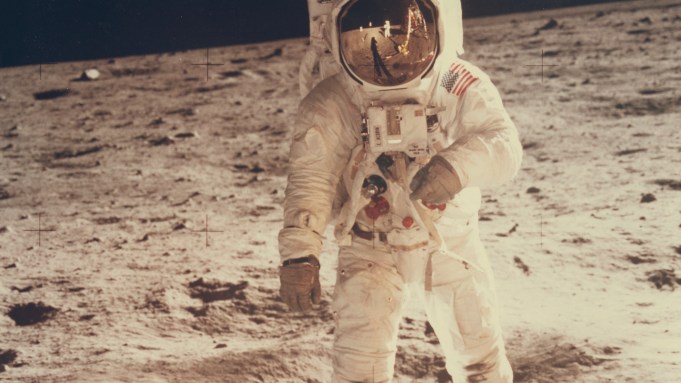 As the 50th anniversary of the Apollo 11 moon landing on June 20 swiftly approaches, a new exhibition in New York is offering an even closer look at some of the earliest moon photography.

Opening today at Jason Jacques Gallery in New York, “Moon Rock” is an exhibition highlighting early photography taken from space. The show includes vintage NASA engineers’ prints of photos of the moon’s surface taken during the 1967 Lunar Orbiter flybys and 1975 unmanned Viking Mars mission, as well as the first photo taken of Earth from the moon, from 1966. In addition to the nostalgic look back at the Space Race era, the exhibition also draws attention to the technological (and very expensive) feat of taking, developing and transmitting photos from space to Earth in a time before digital photography.

The gallery exhibition also includes contemporary sculptural works, reflective of the celestial nature of the accompanying photographs, by the gallery’s roster of artists such as Aneta Regel, Gotlind Weigel, Ingeborg + Bruno Asshoff, and Osamu Kojima.

Take a look at a few of the photographs included in the exhibit.