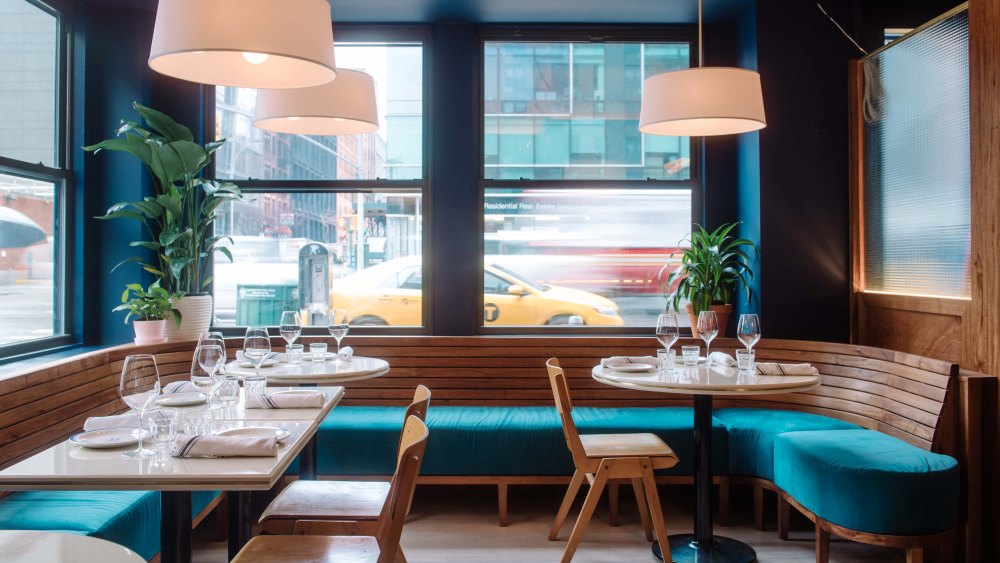 Of the four partners behind the new Motel Morris, none of them had the familial background in hospitality that Tamara McCarthy did. McCarthy, who was born in Dublin and raised in Spain, grew up spending late nights at her father’s Irish pub. After moving to New York and working as a graphic designer, she met her future husband (and business partner) Brett Nidel; his brother, Sam; and their childhood friend, Matt Mogil. The foursome opened coffee shop The Commons Chelsea in 2011, and now unveil their latest venture, new American-style restaurant Motel Morris.

The restaurant, two doors down from The Commons Chelsea on Seventh Avenue, was more of a family affair than a business venture. Their familial connection stretches to nearly every aspect of the restaurant: the lighting, timed to the lunar cycle, was designed by Sam and Brett’s cousin, Jessica Corr, of design firm Tourmaline. Their mother bakes daily dessert specials for the restaurant. Even the name itself is a nod to extended family members. “Our grandfather’s name is Morris, and we found out actually that our other partner Matt’s great-grandfather’s name was also Morris,” Sam says. “We thought it’d be really nice to name it after them. And the ‘Motel’ aspect sort of stemmed from the fact that we live in this building, and the Commons is in the same building.”

With interior design and location set, the last task was finding a chef. Appropriately enough, they finished off their team with friends of friends. A neighbor with whom the Nidels grew up made an introduction to Bill McDaniel, a veteran chef at other Manhattan favorites The Red Cat and The Mermaid Inn, and Motel Morris’ current general manager, Jamie Steinberg, who were originally meant to act as consultants. “We were all using the same words — same phrases, same thoughts; everything just really started clicking,” McDaniel says. “We said, ‘You know what? We would love to work with you guys on this.’”

The result was a midpriced menu of casual American classics. Cocktails and local craft beers were paired with traditional fare ranging from burgers to steak and tuna tartares. McDaniel’s top priority with the food, however, was more about approachability than specialty. “We wanted something ‘neighborhood’; you could come in two-three times per week, have the chicken, have a fish dish, and it’d be your local, neighborhood spot.”

Given Brett, Tamara and Sam (and a few other cousins) call the building home, they know the neighborhood as both small-business owners and residents.  “I think the same thing drives a lot of our decisions,” Brett says. Tamara agrees. “Every time we have to go to a dinner, we go to the West Village, or Uptown, or Downtown, and there’s nothing really around here. So, we knew what we were missing, and what everyone else was missing around here, too.”