Mr. Purple Opens at Hotel Indigo on the Lower East Side 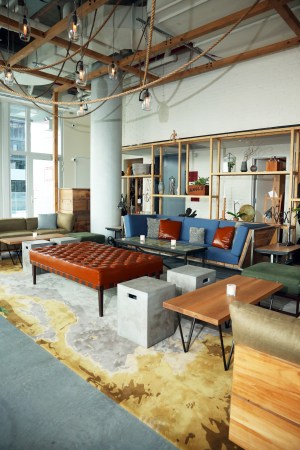 “I wasn’t really familiar with the Lower East Side,” says Scott Gerber, chief executive officer of Gerber Group, from a corner nook of his newest project, the bar and restaurant Mr. Purple on the 15th floor of the brand-new Hotel Indigo. Two years ago, when the building was still under construction, Gerber came to look at the property, and “I went back to my office and I told Oliver, my business partner, ‘We’re definitely getting that deal. I’m going to do whatever I have to do to get it.’”

The result is Gerber Group’s seventh New York bar, which opens on November 16th, and the plan is for visitors, a mix of hotel guests and locals alike, to experience the same drop-jaw reaction as Gerber himself did on his first steps out of the elevator. “It’s such an amazing, unique space,” he says. “We’re really good at bars and restaurants, even when the real estate is not very good. Like we could be in the basement and make it work.”

The 15th floor of Hotel Indigo is certainly no basement. With vast views of downtown Manhattan, and two opposing roof deck terraces — one stretching 5,000 square feet with a bar and swimming pool, and the other, a 750-square-foot space — Mr. Purple knows its strength is the view, and it plays to that. The design concept for the spot was, intentionally, highly minimal. “Our back bar? We don’t have a back bar. We kept the bottles low so if you’re sitting at the bar, the design is the view,” says Gerber.

That view is certainly worth capitalizing on given how hard a good one is to find any longer on the Lower East Side. The building was approved before 2008, and since then the neighborhood has downsized the zoning and restricted the building of such tall structures. The economy then crashed, and the building sat unfinished until Hotel Indigo took hold.

Gerber is acutely aware of the tensions the neighborhood has felt over the past several years as big development has swept in.  “This area was getting very overbuilt, and this community was very protective of their nice little four-story buildings,” he says. “The thing was sitting here unfinished for many years, we came in and said, ‘Look, it’s going to get finished, we’re going to finish it with care.’”

They have made conscious efforts to keep the peace with the neighborhood wherever possible, including hiring locally and designing the space to keep nightlife noise off the streets. “We went in front of the community board to get our liquor license, and we also explained to them that we’re not going to have people downstairs,” Gerber says of the thinking behind having the lobby and Mr. Purple on the 14th and 15th floors, respectively. “You’re not going to have noise on the streets because people are already up here.”

Additionally, they have incorporated many downtown businesses into their menu, including corned beef from 2nd Ave Deli and gelato from  il laboratorio del gelato. “We think it’s important to keep it local and support the local community,” Gerber says. “We’re not looking to put them out of business, we’re looking to support them.”

The menu is straightforward, featuring “everything from flatbreads and pizzas to a great burger to a Cobb salad to a kale salad,” Gerber says. In the morning downstairs on the 14th floor lobby level, Mr Purple will serve grab-and-go Balthazar pastries, Irving Farm Coffee and Liquiteria cold-pressed juice.

The bar program also aims to stay local, with small-batch spirits, wines from Long Island and beer from Brooklyn.

Mr. Purple is the first venture this far downtown for Gerber Group, which operates places such as Union Square’s Irvington and The Roof at Viceroy, along Central Park. Though there will be some adjustments for the group — “we’ll see a lot more tattoos on our staff” — the move to the Lower East Side sees Gerber maintaining their high-end approach. “We’re not the Lower East Side place that has $3 beers and $1 shots,” Gerber says; Mr. Purple’s house cocktails average around $14 to $15, and beers are $7.

The bar name comes from the Lower East Side icon David Wilkie, who became known as “Mr. Purple” for his preferred shade of clothing. The street artist Lee Quiñones was working on a mural for the hotel, and one of the images he was doing was of Mr. Purple. “That’s really what inspired us,” Gerber says. Mr. Purple’s image is discreetly painted on the ceiling of the 14th floor lobby.

The space has already been ushered into the downtown New York nightlife scene, as it hosted a launch party for Moët & Chandon’s latest advertising campaign, The NOW, the week before opening, drawing many a model and fashion friend.

As for that crowd and the many Gerber hopes to see at Mr. Purple, the neighborhood and its views are the draw. “When you’re out on the terrace just looking at all the lights — the Freedom Tower, the Empire State building,” Gerber says, “it’s pretty spectacular.”