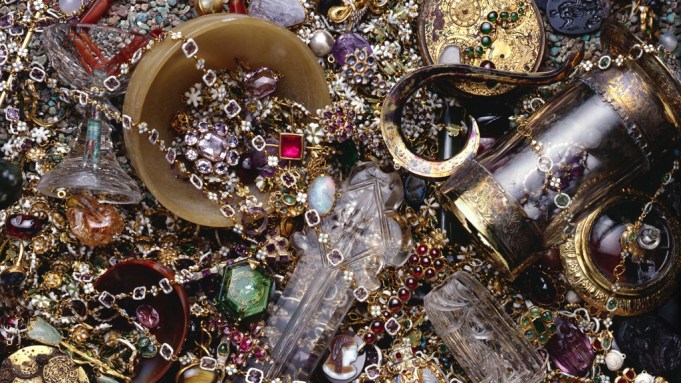 Buried jewels, fake gemstones, cheats, thieves and missing treasure. After decades of putting bits and pieces on display, the Museum of London has at last thrust the whole of the Cheapside Hoard — a mysterious trove of Elizabethan and Early Stuart jewelry discovered by chance more than 100 years ago — into the public eye.

The show, which runs until April 27, is ablaze with stones including emeralds, garnets and pink sapphires brought to England from the New World and the Middle and Far East. There are precious trinkets — cameos, rings, pendants, hair ornaments, scent bottles and earrings worn by men and women — as well as high-quality counterfeit pieces, the fruit of shady goldsmiths feeding the Elizabethan public’s insatiable desire to show off.

“The Queen adored adornment, and conspicuous consumption was very much a feature of her reign,” said Hazel Forsyth, curator of “The Cheapside Hoard: London’s Lost Jewels.” Early in the show, there’s a barbed quote from Sir Francis Bacon, who said Queen Elizabeth I, “imagined that the people, who are much influenced by externals, would be diverted by the glitter of her jewels from noticing the decay of her personal attractions.”

It wasn’t just blue bloods who understood the power of adornment in what was a golden age of peace, prosperity, international trade and exploration, a time when rich, exotic raw materials from around the world were flooding regularly into London.

The masses wore jewelry made of base metals or snapped-up artificial glass baubles made with low-karat gold, some of which are featured in the show.

For the contemporary masses, QVC has created a replica collection of jewelry in collaboration with the museum that ranges in price from 79 pounds, or $126, for a white quartz solitaire ring, to 469 pounds, or $748, for a long, white topaz necklace.

Forsyth said she had been pushing for years to mount a comprehensive show of the Hoard, the world’s largest collection of jewelry from the late 16th and early 17th centuries.

The jewels have been placed in the context of their time: Forsyth has filled the exhibition space with paintings of sitters — including Elizabeth I — wearing or holding jewelry; maps showing sea trading routes, and coffers used to store gems.

She also re-created a life-size goldsmith’s workshop, and tapped the London perfumer Roja Dove to use the fashionable notes of the time — including jasmine and damask rose — to re-create how the Tudor and Elizabethan courts might have smelled.

The nearly 500 pieces on display — including a salamander brooch set with Colombian emeralds and table-cut Indian diamonds; a rare agate cameo of Elizabeth I, and a one-of-a-kind watch set in a hexagonal emerald crystal — were found by accident in 1912 when workmen renovating the crumbling buildings of Cheapside in the City of London began digging in the cellars. In the cellar of 30-32 Cheapside, they found piles of jewelry mixed in with dirt, mud and rubble.

Cheapside has always been a commercial hub: Today, part of the street is home to One New Change, a shopping mall designed by Jean Nouvel. In the 16th and 17th centuries it was famous for its goldsmiths’ workshops.

The hoard found its way to the London Museum because of a well-known pawnbroker and collector of antiquities who bought the jewels from the workmen, and quickly began negotiations with museum officials.

Forsyth has been trying to track down the identity of the jeweler who hid the hoard and the reason why he did so. One theory is that he buried his stock-in-trade and went off to fight in the English Civil War. Its provenance remains one of London’s many mysteries: Combing through property records, Forsyth said she found 18 jewelers working at the same time on the site where the Hoard was found.

“It’s entirely possible that other bits of the Hoard are still out there — the Victorian workmen likely hung onto some of it. And we don’t know how much jewelry there was to start with,” she said. “There are still so many unanswered questions.”