Upscale, yet accessible; Japanese, with hints of Korean — and the signature menu item, temaki, is in the shape of a taco. Just don't use the "f" word.

When talking about their new West Village restaurant Nami Nori, executive chef Taka Sakaeda, chef Jihan Lee and operations director Lisa Limb are hesitant to use what they refer to as “the f word.”

Fusion is not what they’re after. Even though their approach is certainly fused together by a bunch of inspirations and aspects of their personal backgrounds, don’t immediately relegate Nami Nori, which specializes in a style of sushi called temaki, to such a classification.

There are signs of mixture all over the place, which is located at 33 Carmine Street.

Sakaeda, Lee and Limb wanted to open a restaurant that was both upscale and elegant — like the last restaurant where they all worked together: Masa (the chef, Masayoshi Takayama, is the only person who holds a three-star Michelin rating in the U.S.). But Nami Nori had to be simultaneously accessible, in look, feel and price point.

The menu is strictly Japanese, except when it’s not. 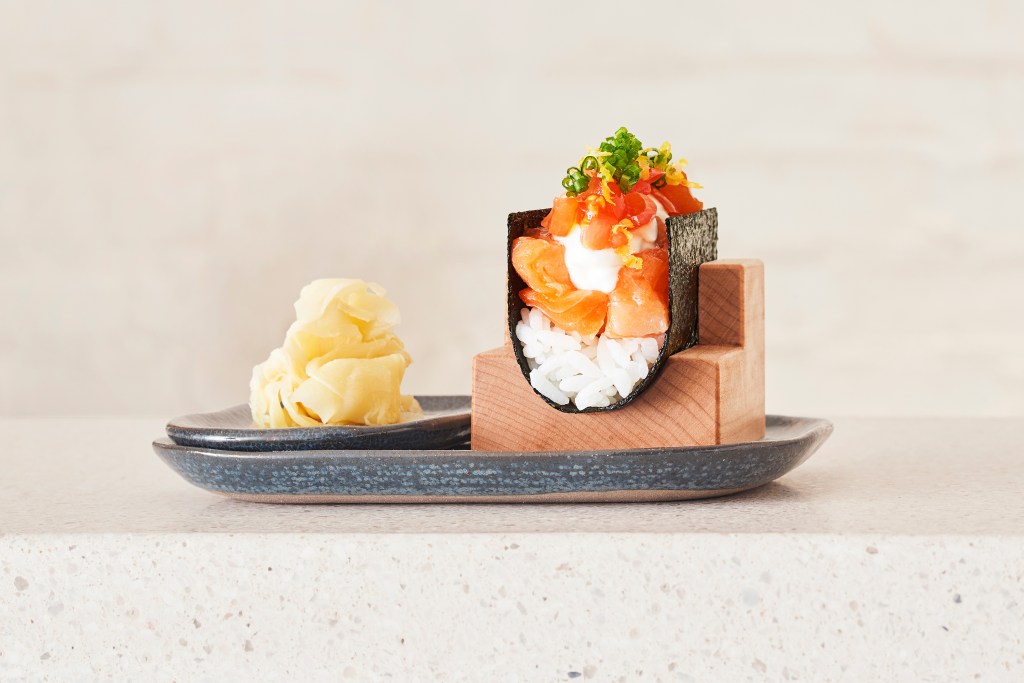 Sakaeda is of Japanese descent and grew up on Long Island in New York; Lee is Korean, while Limb is mixed Korean and Japanese. The executive chef’s experiences noshing on lox and cream cheese out East came into play when they crafted the menu — so they put a roll on there with salmon, tomato and onion cream.

The temaki itself is not quite traditional, either. Instead of a cone shape, it looks more like a taco.

Lee brings a Korean sensibility to the food from his family background (his parents owned a Japanese restaurant when he was young, and they come from the southernmost part of South Korea, where seafood is a specialty). One of the hand rolls on the menu contains sea bass and Gochujang, a Korean chili paste mixed with vinegar sauce.

“It’s very traditional for you to get that sauce when you go to a sashimi restaurant in Korea,” Lee says, sitting at one of the only tables in the restaurant. Nearby are two bars where temaki, sake and wine will be served by chefs behind the counter. 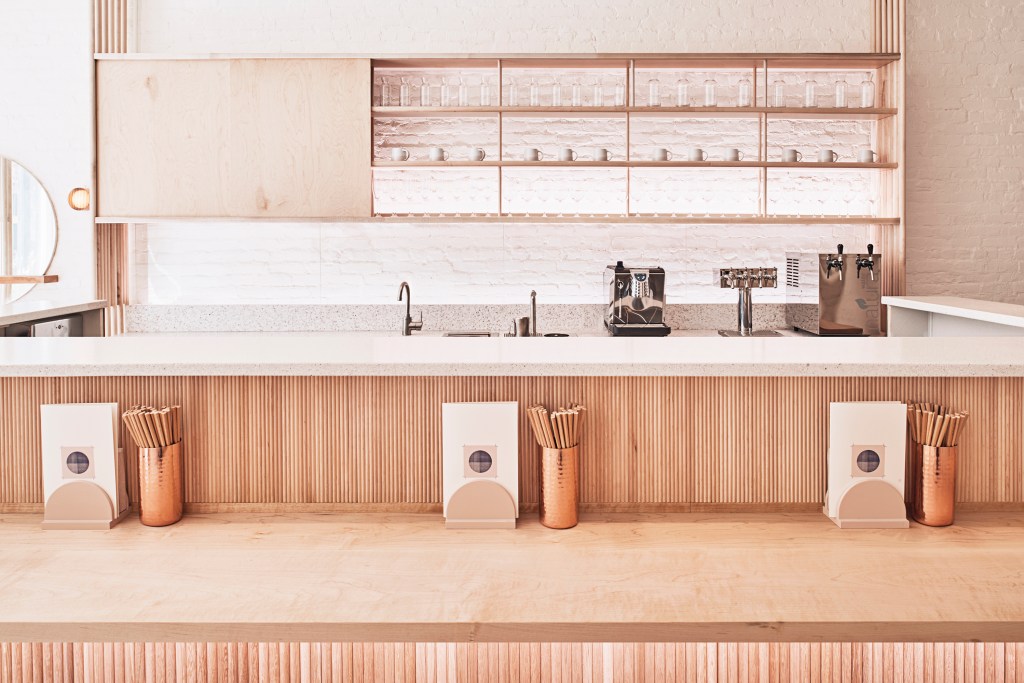 One of two counters at Nami Nori.  Sebastian Lucrecio/Courtesy Photograph

It’s a couple of days before they’re due to open to the public, and Limb, Lee and Sakaeda are running around, preparing for an event that’s taking place at Nami Nori that night for their investors. The restaurant’s interior design is pared back and restrained in its approach. Clean lines of light wood highlight white walls; bottles and glasses are just starting to populate the bar area. The three of them joke that it might be “too nice.” That’s because they wanted to make Nami Nori totally accessible, standing in contrast to Masa.

“In that environment, a big part was none of my friends could come see me and eat the food that I was making,” Sakaeda says. “It just kind of hurt me. I’m doing all this work and none of the people I really love can share that with me.”

At the same time, Sakaeda says working at Masa alongside Lee and with Limb taught him valuable lessons that the three are all carrying into their new restaurant’s ethos.

“Being able to handle stress and manage yourself in front of the guest is a big part,” he says. “Attention to detail. Things cannot be 99 percent; they have to be 100 percent. It’s either perfect or not perfect. Even though we’re doing something casual, I can’t not do it. It’s ingrained in me now. That’s the whole idea and the concept of what we’re doing: trying to bring those philosophies and ideas to something that’s more accessible, and to the masses.” 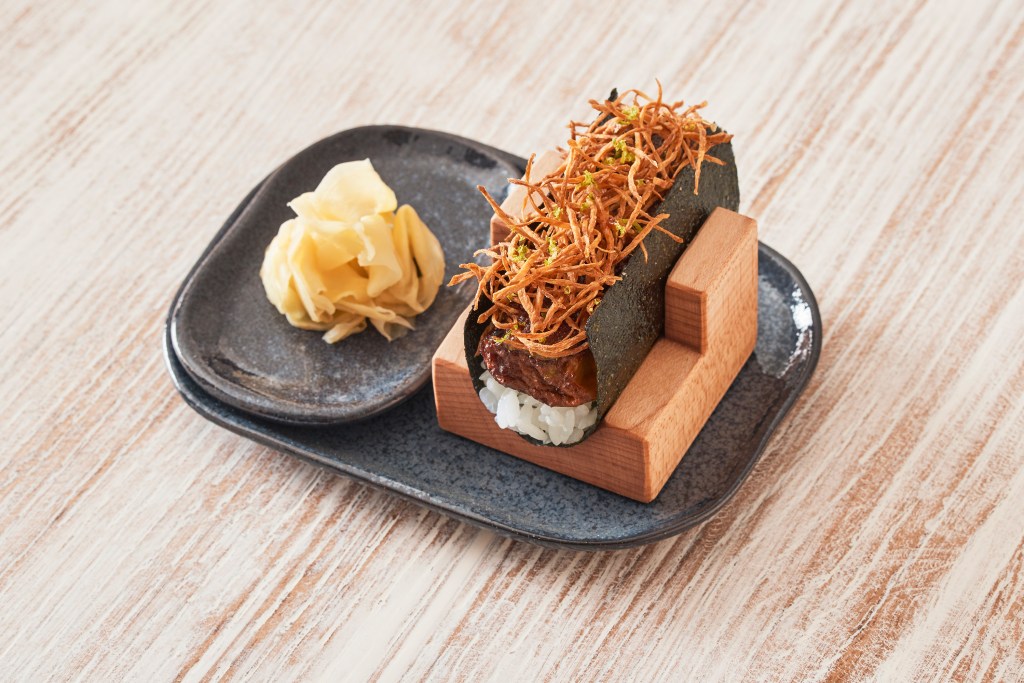 They toyed with ideas for other concepts for years: a fast-casual concept, a traditional Korean restaurant. Limb had an idea for a temaki restaurant lurking in the back of her mind after her husband, who is from Brazil, showed her just how prevalent the temaki style is in his home country. It was yet another crossover in what won’t be called a fusion restaurant, but rather, an amalgamation of all the good things that make Limb, Lee and Sakaeda who they are and where they’re from.

“I think it was over a family meal one day,” Limb says. “We would always shoot back different ideas that were sometimes crazy, sometimes whatever. We were considering different ideas of how to do this. A lot of people are going fast-casual, but for us and our wheelhouse and the backgrounds we come from, we didn’t want to lose that piece of it: that interaction with the guest and how important that is to the experience for people sitting here, at the counter, especially. We wanted to have that communication between chef and guest — that relationship and interaction.”

Environment Is Everything at This Williamsburg Café by Day, Restaurant by Night