"Gods and Kings" gives you the backstory of the two chronicled designers. 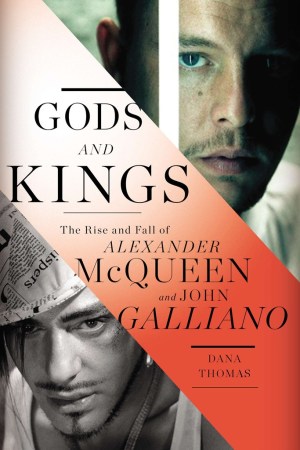 Dana Thomas’ new book, “Gods and Kings: The Rise and Fall of Alexander McQueen and John Galliano,” brings to mind two quotations: Walter Bagehot’s “We must not let daylight in upon the magic,” and the Arabic proverb, “The dogs bark, but the caravan moves on.” “Gods and Kings” tells you more than you ever imagined about the lives of the two chronicled designers — the backstory.

How did this new project begin? “I was writing a piece for The Washington Post about John Galliano’s downfall,” says Thomas, a former model and longtime journalist who lives in Paris with her husband, Hervé and their daughter, Lucie Lee. In the first paragraph of the Post story, she found herself mentioning Marc Jacobs’ two stints in rehab; Tom Ford becoming depressed after getting sacked from Gucci, and Christophe Decarnin, who was the lead designer at Balmain and who reportedly ended up in what the French call a maison de santé. McQueen had been dead by his own hand for a year at this point. Thomas goes on: “So I write this paragraph, and I think, ‘Wow! There’s something going on here.’” So she asked her book editor and agent: “Is this a book?” The historic moment, she says, “felt like the end of a 30-year run of creativity. Beautiful, boundless, dizzying, magical, but it came so abruptly to a close. I knew I still had a lot in my cave [the storage space in her apartment building]. I’d kept all my clip files since before Google was invented.

As for McQueen’s suicide, according to “Gods and Kings,” this was not his first attempt, and it was something that he had often mentioned. “I think he was put on antidepressants, but he didn’t take them because it made him nauseous,” says Thomas. “He suffered from acute anxiety and stress-induced problems.” At the time of his death, which took place on the evening before his mother Joyce’s funeral, he had been seeing a psychiatrist, Dr. Stephen Pereira, who specialized in work-related stress. Claudia Joseph interviewed the McQueen family for The Daily Mail. His sister Janet told her, ‘I thought that he was coming to terms with her death. How wrong I was.”

McQueen’s most passionate fan, muse and early backer, of course, was the flamboyant fashion editor Isabella Blow, who, in 2007, also committed suicide. Thomas says, “I just thought she was great fun. I wouldn’t have wanted to be her boss, though, and to have to approve her expense accounts.” Thomas details what appears to have been an unhealthy sadomasochistic psychological dynamic between the two. By all accounts, the fact that McQueen did not give Blow a job at Givenchy when he was named designer there broke her heart.

The book is full of interesting details about each fashion show and what, at times, seems like every idea each designer ever had. Both designers’ romances and misbehavior are also painstakingly detailed. According to the book, in the last months of Galliano’s employment at Dior, firm head Sidney Toledano and LVMH Moët Hennessy Louis Vuitton owner Bernard Arnault took extensive steps to rein him in. When the designer melted down at the Mercer Hotel in New York during an inspiration trip in fall 2010, Toledano insisted that he return to Paris at once. Both men met or tried to meet with Galliano over his behavior, well before he began slinging anti-Semitic epithets at a neighboring table in the Paris café La Perle in February 2011. This was also not the first time, as it emerged, that the designer had used said epithets when inebriated. Thomas observes that there were days when Galliano simply didn’t come to the office, but members of his staff received what seemed to be drunk-dialed phone calls. Before the La Perle incident, both Arnault and Toledano had suggested that he go to rehab. He refused.

One of Galliano’s original muses, Amanda Harlech, found herself wooed by another designer: Karl Lagerfeld. Harlech had long worked with Galliano and was given a consulting contract when he went to Givenchy. But it appeared that when Galliano was seconded to Dior by Arnault, she was not going to be appropriately compensated. She had two children, she was about to be divorced and it seemed likely that her husband was not going to be a reliable source of funds. The figure that she was offered at Dior was, Thomas writes, insultingly low, and this was probably due to the fact that Galliano’s right hand, Steven Robinson, wanted to get rid of her. André Leon Talley, who is one of the key players in “Gods and Kings,” stepped in, brought her to a Chanel show, and, before long, Lagerfeld offered her a better position at Chanel.

Thomas says of Harlech, “Her fan club is…I’ve never encountered anyone whom everybody who ever met, people who worked with her in 1984, everyone used the words ‘amazing,’ ‘beautiful.’ There was unquestioned love for Amanda Harlech. Only one person said, ‘From time to time, she could come across as aloof. But she wasn’t.’”

Then there was the death of Robinson, who had been with Galliano from the beginning of his career, and was invaluable to the designer as a fashion collaborator and who was also gifted at administration — his Mr. Inside. Robinson died in 2007 of what was reported at the time as a heart attack, but, according to later Paris court proceedings against the man convicted of being his dealer, Alassane Seck, was a massive overdose of cocaine. Fashion insiders believe that losing him was the beginning of Galliano’s unraveling.

The jacket copy of “Gods and Kings” — and its ending – suggests that there are some other bad actors here. Thomas says, “I hope Bernard Arnault doesn’t come across as a villain.” The jacket of the book, however, says Thomas “chronicles the revolution in high fashion in the last two decades — and the price it demanded of the very ones who saved it.” It’s hard to know what Toledano, Arnault and, for that matter, Domenico De Sole, who purchased Alexander McQueen for Gucci Group or his successor there, Robert Polet, should have done with two very gifted, unstable men. Toledano and Arnault appear to have done everything within their power to secure Galliano’s physical and mental health. Perhaps they can be criticized for overindulging the designer. But once his problems were brought to their attention, they acted with dispatch.

It seems unlikely that De Sole or Polet were aware of the depth of McQueen’s despair, which is scarcely surprising given the fact that no members of his own family knew it. One source who spoke to Thomas suggested that, rather than the death of McQueen’s mother causing the designer to commit suicide, her death — coming after a long illness — actually freed him to do so. “Gays don’t do old,” is one quote attributed to McQueen.

And it should be said that couture collections have not been a reliable source of revenue for a great many years; they have long been regarded as showcases for the skills of a top atelier. At least since the late Sixties, designers have talked about the notion that the couture is over and should be scrapped. As for the brilliant fashion moments of McQueen and Galliano, the former’s legacy was secured, if it wasn’t already, with the blockbuster show, “Savage Beauty” at the Metropolitan Museum’s Costume Institute in New York in 2011. Galliano’s story is still being written, now at Maison Martin Margiela.