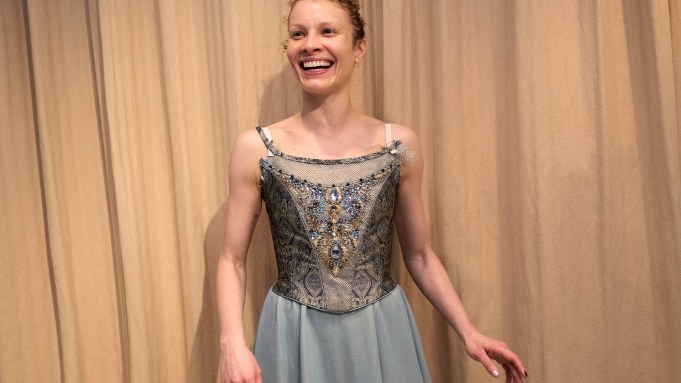 Tonight, however, Happel will flip the switch — unveiling original costumes of his own design to accompany Balanchine’s “Tchaikovsky Piano Concerto No. 2,” a work which had originally premiered in 1941.

A cast of 29 dancers will rally across the Lincoln Center stage, dressed in Happel’s vision of beaded, French brocade bodices, languid blue-chiffon skirts and custom-made tiaras.

“A big part of my job typically is to basically make ballets, when the curtain comes up, look like they did the day it premiered,” Happel said of his day-to-day work, which often references ballet costumes dating back to the early 1900s.

“It’s very difficult and intimidating,” Happel said of breaking from his typical mode and stepping into the role of costume designer. Having joined City Ballet in 2006, Happel has designed looks for new ballets by choreographers including Benjamin Millepied, Peter Walker, Peter Martins, Mauro Bigonzetti and Nicolas Blanc. Only once has he revised costumes for a Balanchine work — tackling “Symphony in C,” a grand ode to classical Russian ballet, in 2012.

“It’s not something that happens fast; I really have to think about it. I have to put things on paper, I have to cut and paste and get fabrics, lay them in front of me and look at them for weeks,” Happel said of his design process.

“Tchaikovsky Piano Concerto No. 2” — a work requiring sharp technique and a bravado attitude — is unique for New York City Ballet in that it has seen three costume changes since its Karinska originals. The last iteration, designed by Gary Lisz in 1990, was crafted in a palette of washed-out pastel chiffon.

Happel’s designs, carefully constructed over the last six weeks, incorporate some 38,000 crystals and meters of the tinselly brocade, which was milled on special order in France. “Hopefully these last for a long time,” he said of the new fleet.