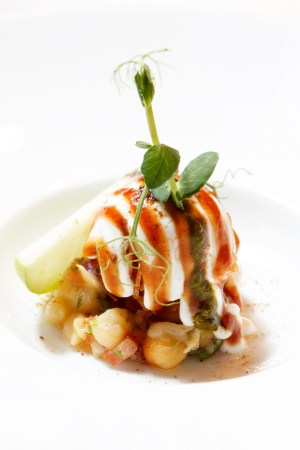 “Come and feast your eyes on the skylight.”

Restaurateur Rohit Khattar was standing in the middle of Indian Accent’s New York dining room a few days before opening, which had just illuminated with a soft glow. It was an unexpected effect for the street level space, located adjacent to the Le Parker Meridien hotel. “It isn’t a true skylight, it’s just a false ceiling,” he clarified. “But I wanted it to look as if it was a real skylight.”

Far from Manhattan’s “curry row,” it is these unexpected details that help elevate Khattar’s restaurant, which is reworking and challenging perceptions of Indian cuisine.

Khattar opened the first outpost of Indian Accent in New Delhi in 2009 with chef Manish Mehrotra at the helm. “The brief to Manish was ‘Let’s do something that is very risk-taking and break the boundaries,’ and boy, did he do that,” Khattar reminisced. Indian Accent has since become a culinary destination, earning a spot on S. Pellegrino’s best restaurants in the world list — no. 77 in 2015. It was the only restaurant in India to make the list.

“In the beginning, at least two tables used to read the menu, and then go,” said Mehrotra of their inventive concept. “People started understanding what we are doing, what we are trying to do, what we’re trying to represent.”

Khattar and Mehrotra hope that same enthusiasm for reimagined Indian cuisine will carry over to New York.

“We’re doing dishes which people here are not very familiar with,” Mehrotra explained of the menu, which draws inspiration from the diversity of India’s different regions. “It is Indian food: the flavors, the taste, the texture, everything is Indian,” he continued. “But it’s not like the food you get on curry hill.”

Recognizable Indian dishes have been reinterpreted — tikka masala, vindaloo — and detailed with sculptural and delicate flourishes such as dried rose petals. While the most popular menu items have been carried over from the New Delhi location, Mehrotra has also created a few dishes that are particular to New York, including beef items and a pastrami naan created in tribute to the city.

Khattar’s wife Rashmi along with design firm BHDM crafted the dining room’s clean, minimalist feel, which is heavy on luxe walnut tables, rich velvet upholstery, and geometric detailing. The walls are mostly bare, but grooved in the same texture as an homage to the New Delhi location.

Khattar and Mehrotra spent two years searching for a space before landing at Le Parker Meridian. “In India we call it kismet. It’s all destined,” Khattar conceded a few days before opening. “We’re happy here and we’re hopeful that New York will embrace us the way New Delhi has. New York is a tough city.”