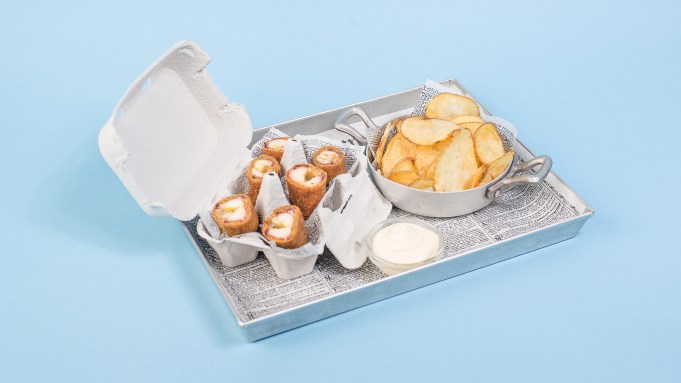 Palazzo Strozzi is hosting a major retrospective exhibition of video-artist Bill Viola. Called “Rinascimento Elettronico” [“Electronic Renaissance”], the showing features Viola’s works from the early Sixties to more recent pieces. The exhibition, which has been cocurated by Fondazione Palazzo Strozzi’s general director Arturo Galansino and Kira Petrov, Bill Viola Studio’s executive director, aims to compare the artist’s works to those of four masters of the Renaissance such as Pontormo, Masolino da Panicale, Paolo Uccello and Lucas Cranach. Aspiring to set a dialogue between technological research and aesthetic considerations, the exhibition also celebrates the bond between Viola and Florence, the city where he started his career and which has always been a source of inspiration.

French brand American Vintage is opening its second Italian flagship on Florence’s Via Strozzi 8r, just around the corner from Piazza della Repubblica. The design of the store, which follows the shop the brand unveiled in Rome last December, reflects the label’s philosophy of using high-quality materials and rich fabrics. Michaël Azoulay founded American Vintage in 2005 designing T-shirts in natural fibers and developed the brand around this core product. American Vintage rethinks the definition of basics by adding unexpected features, airy cuts and fashion twists to its offering. The latest opening is part of a set of recent developments for the brand, which counts 120 flagships worldwide and is set to open 20 stores in 2017, including units in Tel Aviv and Berlin.

Fishing Lab is a charming new spot for lunch and dinner on Via del Proconsolo 16r, a few blocks away from Piazza del Duomo. The location housed “L’Arte dei Giudici e dei Notai,” a corporation of lawyers and notaries, from 1200 until 1500. The historic building, whose walls are covered in frescos, including one of the oldest portraits of Dante Alighieri, required a significant renovation to preserve the art works. Clients are invited to create their own menu selecting through the restaurant’s offer of raw fish dishes as well as inventive and unusual cooking methods. Street food is also available, and to prevent food waste, Fishing Lab instituted the Fishing Lunch, which offers half portions for a light lunch break.

Set to open June 14, during Pitti Uomo, Bsf, which stands for Blue San Francisco, will unveil a new store on Via Vigna Nuova 57r, just in front of Palazzo Rucellai. The new space, which covers 1,720 square feet and is designed to look like a Fifties garage, will sell the brand’s signature vintage-inspired casualwear including military-style pieces as well as more dressy items. Blue San Francisco was founded by Romano Ridolfi, who spent 35 years working for established fashion labels. Ridolfi foresaw the vintage trend in men’s wear and developed it for his offering, which conveys his “idea of fashion as connected to subdued elegance, meaning those well-dressed should pass unnoticed.” The family business is run by Ridolfi’s sons Michelangelo, Leonardo and Lorenzo. Along with Blue San Francisco’s collection, the new shop will showcase customized bicycles from La Strana Officina, guitars from Paoletti and biker-inspired jewelry from Rouille.

To coincide with the 92nd edition of Pitti Uomo, Diesel will celebrate the opening of a new shop on Via Degli Speziali 16r. The store concept reflects a blueprint introduced in 2015 and was created by architects Wonderwall along with Diesel’s artistic director Nicola Formichetti. Aimed to preserve the pre-existing structures of the building such as a wood-coffered ceiling and marble flooring, the unit also uses industrial materials and finishes. To mark the opening, the venue is holding an exhibition of three unreleased collages created with images from the Diesel spring 2017 ads shot by David LaChapelle, thus marking the last stop on the #makelovenotwalls campaign with the rainbow-colored inflatable Love Tank coming to Florence. Denim will be core in the store — displayed in a dedicated “Denim Temple” space — but the brand’s complete range of men’s and women’s collections will also be available.