Tarmak 22, co-run by Agnelli heiress Tatiana de Pahlen, is located on the first floor of Saanen airport in Gstaad, Switzerland.

“There are a lot of art collectors in Gstaad, but there aren’t really any spaces to organize shows and get together,” said Tatiana de Pahlen, who cofounded Tarmak 22 with Antonia Crespi, a managing partner at luxury real estate company Engel & Völkers.

“There is both a tradition of artists living here — Balthus used to own a chalet in Gstaad — and a couple of well-known not-for-profit art events, like Elevation 1049, an art fair organized by the Luma Foundation,” continued the 28-year-old, who studied contemporary art in Switzerland. “We wanted to find an in-between.”

De Pahlen and Crespi visited the breathtaking space separately, and were immediately taken with the view of the airport’s landing strip with a backdrop of snow-covered mountains.

“The location is spectacular,” Crespi enthused. “The airport has a very alpine feel: the beams in the hangar are made of 8 meter strips of wood, and it sits in a valley in between the mountains. From the huge windows all around the hangar, the view is either all white in the winter, or all green in the spring.”

“And the landing strip with all the helicopters reminds me of James Bond movies,” de Pahlen added. “There is a real sexiness to it.”

The two women were eventually introduced by a mutual friend and investor in the airport, who saw a connection between de Pahlen’s artistic background — an heir to Marella Agnelli, she worked at the family art foundation in Turin — and Crespi’s knowledge of local real estate. After a soft opening in August 2018, Tarmak 22 was officially launched on Valentine’s Day 2019. 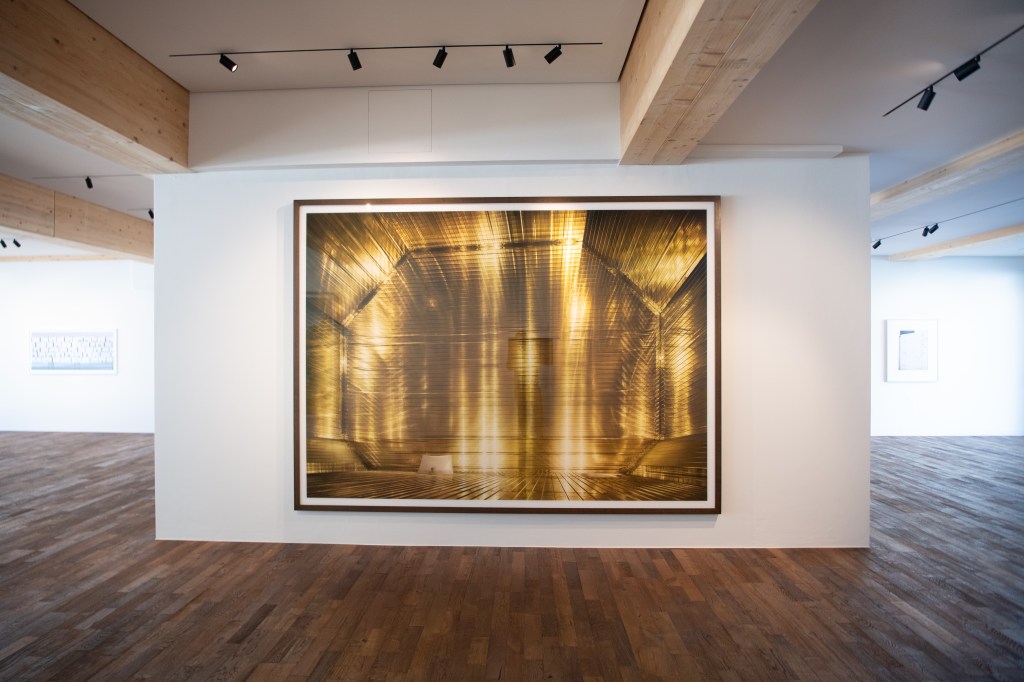 A picture by Andreas Gursky at Tarmak 22.  Raphael Faux

Since its opening, the gallery, which takes its name both from the tarmac on airport runways and the Saanen airport code, has welcomed a mix of chalet owners, curators from established Zurich galleries and students from Lausanne. The space is open to the public, whether they are planning to travel or not, and will host a yearly program of conferences and performances. “We’re aiming to get people to just stop by,” de Pahlen said.

Following its first exhibition — a selection of grand-scale photographs by Andreas Gursky organized in partnership with the Gagosian gallery — Tarmak 22 is gearing up for its second event, dedicated to the extensive collection of Mexican art collector Alex Hank, launching just before Art Basel.

But for the pair of enamored owners, the gallery’s unique location makes it a destination in itself.

“We want to make the most of the space,” explained de Pahlen. “We’re willing to do things that are not necessarily commercial. The gallery will be open to projects of any kind, the only criteria being that they should be as exceptional and singular as the situation and space itself.”