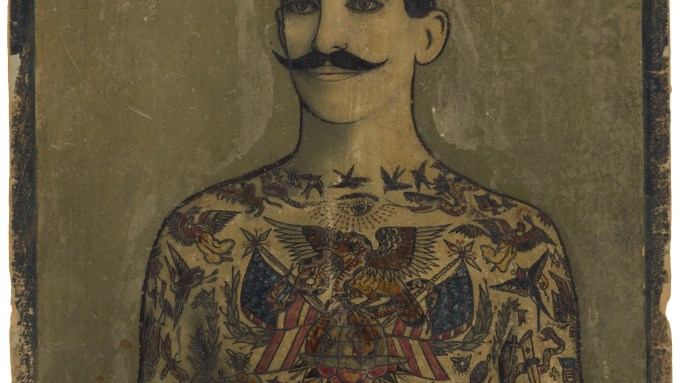 Little known fashion fact: The star symbol in the Macy’s logo came from a tattoo R.H. Macy got on his hand while working onboard a Nantucket whaling ship in 1837.

The art form, which has been in and out of fashion since coming into popularity beyond tribal origins, is the subject of exhibitions at two New York museums that credit the city as the birthplace of the modern tattoo. As designers look to exhibits to influence their collections, these shows might just provide the spark.

“Tattooed New York,” which opened Feb. 3 at the New York Historical Society, gives context to the body art and connection to the city. The exhibition explores tat history from its origins on the New York-based Iroquois tribe as a means of identification and its popularity in the navy as a travelogue of sorts, to its segue into sideshow attractions and its underground aura while illegal, through its mainstream appeal among suburban housewives today.

New York was central to the art form as a port city that also fostered the arts. The Coney Island sideshow scene didn’t hurt, either. But perhaps a little known fact was the popularity among the high-society set around the turn of the century, where hidden tattoos were a fad among Victorian ladies. They also became fashionable in the Thirties among world travelers, thanks in part to European royalty who journeyed to Jerusalem and Japan and returned with tattoos.

One such social, Amy Gillig (also known as Amy Crocker), was featured in the Sunday magazine of the New York World, where she chronicled her world travels and her various body art. Most likely, Crocker would have frequented the famous artist Charlie Wagner, aka the “Michelangelo of Tattoo,” who was rumored to have inked various Vanderbilt heirs as well. Tattooing also inspired a line of beach cover-ups in the Thirties made from popular sailor motifs. They were designed by Lilian Waugh, a relation of painter Frederick Judd Waugh, and sold at Lord & Taylor.

The exhibition also explores the women’s liberation movement of the Seventies. In 1970, Janis Joplin’s visible bracelet tattoo by artist Lyle Tuttle inspired more than 800 women to get one from the artist immediately following the exposure. According to Tuttle, the women’s movement changed the art form from circus sideshow freak to a “softer self-expression.” Tattoos flourished during this period despite having been banned in 1961 by the New York City Department of Health due to a largely unproven link to Hepatitis C. It would not be lifted until 1997.

Another show at the South Street Seaport Museum is “The Original Gus Wagner: The Maritime Roots of Modern Tattoo.” Wagner, a merchant sailor (no relation to Charlie), pioneered the tattoo-artist-as-sideshow-moneymaker-gig when he returned from his world travels. He worked on board steamships as a stoker from 1897 to 1901. A self-described “professional globetrotter,” according to executive museum director Captain Jonathan Boulware, he chronicled his many sea voyages and ports of call, among other things, on his body.

Upon his arrival back in the States, Wagner began to exhibit his body at carnivals and country fairs. Wagner soon realized that he could make even more money by tattooing others. His most famous subject was his wife, Maud, who was known as one of the first tattooed ladies, an even more outrageous sight in the early 20th century.

The centerpiece of the exhibition was a travelogue of Wagner’s donated by folk art collectors Alan Govenar and Kaleta Doolin. Along with photographs, notes, letters and journal entries, it contains more than 250 tattoo designs, referred to as “flashes.” The flashes themselves are so fragile that the museum filmed their unveiling, which allows viewers experience them in a more 3-D manner. These designs, which have strong roots in the maritime culture, are one reason Wagner is considered a godfather of modern 20th-century American tattoos.

The modern fashion industry is no stranger to the art form, either. While not considered designer-level merchandise, the Christian Audigier for Ed Hardy label was a huge cultural and commercial success in the early Aughts. Jean Paul Gaultier sent shockwaves through the fashion world in 1994 with his tattoo-inspired collection on a printed skin-tone mesh fabric that, when worn, looked like actual tattoos on the body.

Widely believed in part to be a reaction to the Charlie Hebdo murders in Paris, Rei Kawakubo for Comme des Garçons partnered with multidiscipline tattoo artist Joseph Ari Aloi, aka JK5, on her men’s collection in 2015. The heavily abstracted print read “Born to Die,” the sole fashion piece on display at “Tattooed New York.”