The latest hot spots for dining, drinking and diversions while in town for the trade shows. 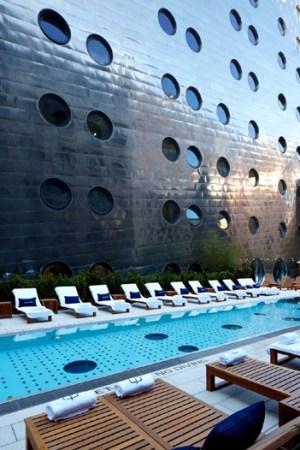 LIQUID DREAM: With the summer heat here, and New York’s ocean options a largely outer-borough proposition, the newly opened Dream Downtown hotel could offer some relief. The second floor of the newest Vikram Chatwal Hotels outpost features a 4,800-square-foot “beach club,” The Beach at Dream Downtown, which comes complete with trucked-in white sand, chaise lounges and cabana staffers. Swimmers will want to pack their best bathing suits as the translucent pool bottom can be seen through the hotel lobby’s ceiling. Once the sun sets and the heat subsides, the hotel’s rooftop club, PH-D, offers late night entertainment and some stellar views of Midtown.

DIRECT VIDEO: The most buzzed about (and near universally praised) exhibit in town since it opened in June, Ryan Trecartin’s “Any Ever” at the Museum of Modern Art’s P.S. 1 outpost in Long Island City features seven new works by the 30-year-old sensation in his first major museum showing in New York. The artist presents YouTube-ready videos and a cast of manic and colorful (often literally) characters that reach mesmerizing ends. The works, created in Miami with collaborator Lizzie Tisch during 2009 and 2010, consist of two series, “Trill-ogy Comp” and “Re’Search Wait’S,” and are presented in a series of viewing rooms that divide the space’s first floor Main Gallery. In true home-movie fashion, the rooms are stocked with household decor such as couches and kitchen tables. Through Sept. 3.

THE HIGHLINE, CONTINUED: The first segment of the High Line (running 30 feet above ground from Gansevoort to 20th Street) opened to much fanfare in June 2009: the organization Friends of the High Line received accolades for rejuvenating the otherwise overwhelmingly industrial Meatpacking District with green space and providing prime lounging spots for pedestrians with stunning views of the waterfront. In the past two years, the park’s popularity as a destination and event location has grown, with the continuation opening this summer, running an additional 10 blocks north to now conclude at 30th Street.

The newest part of the High Line eschews the forgotten-industrial feel (abandoned railroad tracks run over with flora, etc.) of the first segment in lieu of more classically designed gardens and elevated walkways. Heavily planted with wildflowers and well-maintained grass, the High Line has unbeatable views of the Hudson, evidenced on the 23rd Street lawn (closed Mondays and Tuesdays), which offers ample room for picnicking and sunbathing, weather permitting. Food vendors line the park, with The Porch (at West 14th Street) operating a 40-seat open-air cafe and L’Arte del Gelato, People’s Pops (both near West 16th Street) and La Newyorkina (near West 23rd Street) offering ice cream, gelato or other chilled sweet treats to enjoy during the summer. A temporary public plaza beneath 30th Street dubbed “The Lot” serves beer and wine from Colicchio & Sons and plays host to a rotating fleet of food trucks such as The Taco Truck and Red Hook Lobster. When the people watching or urbane landscapes get staid, a rotating schedule of temporary exhibitions of public art are also displayed in and around the High Line for the enjoyment of visitors.

The Highline; the recently opened second portion runs along 10th Avenue, from 20th to 30th streets.

DINE-IN MOVIE: Dinner and a movie takes on new charm when done outdoors at the HBO Bryant Park Summer Film Festival, where a classic movie is screened every Monday. The carpet of grass there can quickly become crowded — but a stylish solution was just launched by the nearby Andaz 5th Avenue hotel. A picnic host can be hired from the hotel, who will pack you a basket, prepare a blanket, lay out your al fresco feast and, most importantly, guard your premium spot near the movie screen until you arrive — fighting off the Manhattan swarm and pigeons alike. The picnic host will cost you $150 and baskets range from a modest $60 for sandwiches all the way up to $950 if you want to add Champagne, Osetra caviar, blinis and seasonal fruit. If you’re feeling especially extravagant, there’s a $2,000 basket that will make you the envy of your neighboring moviegoers. On July 18, “In the Heat of the Night” will be screened in Bryant Park at dusk.

THE ROOF IS ON FIRE: Last month, popular eatery STK opened a new rooftop destination atop its Meatpacking District home. Dubbed STK Rooftop, the restaurant and lounge features views of the Hudson River and a dramatic, freestanding fire in the center of its space for rubbing elbows beside. The trendy spot has already hosted a Hamptons Magazine party with Heidi Klum and is a good spot for celebrity sightings such as Kirstie Alley, Kelly Rutherford, Lance Bass and hoops stars Tony Parker and Grant Hill. Signature dishes include the lobster Cobb salad, tuna taquitos and barbecue baby chicken. Reservations are available for parties of six or more.

PARAMOUNT REDUX: Looking for a tipple in Midtown? Check out the renovated Paramount Bar in the Paramount Hotel. Once home to Rande Gerber’s Whiskey Bar — and then inexplicably a sports bar call Bar 46th — the plush new space has been gutted and reimagined by designer Susan Jaques with grand chandeliers, scarlet velvet banquettes and a mirrored bar, in an effort to bring back some of the storied hotel’s buzz.