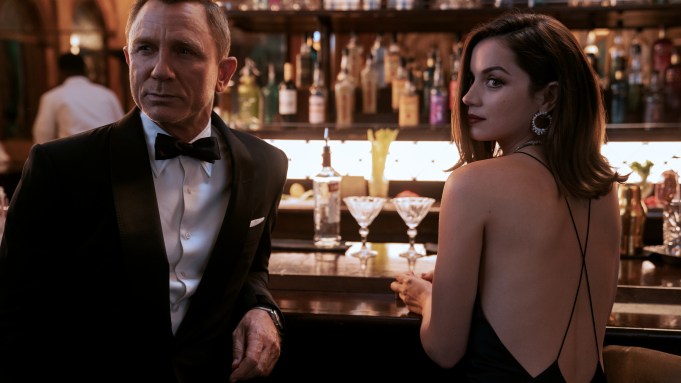 For Suttirat Anne Larlarb, James Bond was the holy grail of design.

“I’ve always been a Bond fan,” says the “No Time to Die” costume designer. “If you’re inclined to pay attention to Western aesthetics in the last century and you follow film, it’s hard to steer away from the impact that Bond films have made in terms of fashion and culture and aesthetics.”

The week before the much delayed premiere of “No Time to Die,” Larlarb — like many fans — was looking forward to the next installment in the Bond franchise, and the trailer was enough to stoke that anticipation. “The minute the music comes on, you get that Bond riff — Like, oh yeah, that’s what we did. We did a Bond film,” she says.

Larlarb was brought onto the project by the film’s original director and her frequent collaborator, Danny Boyle. When Boyle and the film parted ways, Larlarb’s future was uncertain, although producer Barbara Broccoli and star Daniel Craig both reached out and said they’d love for her to stay on.

Cary Joji Fukunaga took the director’s reins, and in one of their first meetings Larlarb asked him to distill the script down to a few adjectives. He told her that he wanted it to be grounded and real, with an edge — a vision that aligned with Larlarb’s approach. Already steeped in the Bond aesthetic — even as a teenager she was enamored with the costumes in the films — Larlarb began the design process by revisiting the previous installments with a forensic eye. “So that I could have the ‘je ne sais quoi’ language of a Bond film coursing through my veins,” she says.

“Bond is a man who just always looks right,” says Larlarb. “No matter what phase of his life he’s in, no matter what situation he finds himself in — whether he’s in some kind of black-tie event or embedded in a foreign country where he has to be action-ready, or when he’s quote-unquote in retirement and chilling in Jamaica — he’s always wearing something perfect for the moment.”

Larlarb told Craig that she couldn’t imagine Bond standing in front of a full closet, indecisive and wondering what to wear for that day. “If it’s a tux or if it’s a T-shirt, or if it’s a pair of mismatched trousers, it always feels like an essential and perfect decision,” she says. “His wardrobe is comprised of all those perfect decisions that were made at some point. So that on any given day, it’s the instinct rather than the hemming and hawing over which tie goes with which shirt, which suit?”

Of course, it was Larlarb and her team making those decisions. While wanting to pay homage to the character’s history, Larlarb recognized the singularity of Craig’s Bond. “We got a very human, emotional and sometimes vulnerable Bond. The human being, the man, versus just the perfectly suited 007,” she says, adding that while the clothes were an extension of the action within the script, they also had to satisfy viewer expectations. “It’s not a documentary about somebody just going through these motions — it’s a Bond film, and you have to live up to it.”

Many of the looks in the film were created custom within the costume workshop, with the needs of each character in mind. Larlarb and her team also reached out to brands that have traditionally worked with the Bond franchise, and asked if they were interested in contributing. Other looks in the film, such as the navy jumper worn by Bond during a combat scene, were adapted from vintage finds.

Larlarb credits Craig as a generous collaborator; his looks were tweaked and customized according to conversations about specific action blocking. “There’s not one single thing in this whole film that didn’t come out of a close collaboration,” she says. “But obviously, being who [Craig] is and having the historical embodiment of this character, I’m never gonna presume that I’m going to be the one with all the answers. He knows this character better than anybody on earth. And so I’m going to respect that from the outset.”

Larlarb also credits conversations she had with the entire cast, including returning actors Ralph Fiennes, Ben Whishaw and Naomie Harris for shaping her approach. “I’m coming into their world,” says the designer, adding that she wanted to understand each actor’s expectations in terms of continuity of their characters, and aspects they wanted to change or build upon.

The notable newcomer to the franchise is Lashana Lynch, who stars as the new 007 agent in the film. “She is the new best agent in M16’s arsenal. So she has to be dressed accordingly,” says Larlarb. “If she’s at M16 headquarters, she looks as sharp as Bond ever did as a student at M16,” she adds. “I wanted to make sure that we had a level of self possession and power built into [Lynch’s] costumes that take her away from being a decoration or just a well-dressed side dish. The clothes never were wearing her, she was the one in control and the clothes were an extension of that self possession, power and elegance.”

“No Time to Die” will finally hit theaters on Friday. Next, Larlarb can anticipate the release of a project within another iconic franchise: “Star Wars.” She recently finished working as the costume designer for “Obi-Wan Kenobi,” a forthcoming miniseries starring Ewan McGregor. “Another holy grail of design,” she adds.