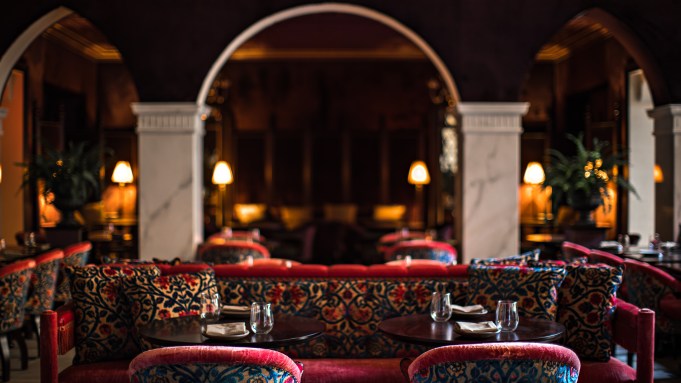 Downtown Los Angeles continues to get the Renaissance treatment that started a few years ago with the Ace Hotel in the Theater District and the gentrification of the Arts District. Now the NoMad hotel, whose original location is in New York, has opened a West Coast property on the corner of 7th and Olive Streets.

Created by the Sydell Group, a partnership between Ron Burkle and Andrew Zobler, the hotel continues in the spirit of the New York flagship by taking over a historic landmark, Giannini Place. The Italianate-style building was the original Bank of Italy, and still retains many features bank founder Amadeo Giannini installed, such as tile inlays, intricate woodwork and frescoes.

Much of the building’s Neoclassical style, such as its Doric columns, ornate golden ceiling and marble floors, have been preserved and incorporated into the new design. The original vault that once housed 12,000 safety deposit boxes and a 50-ton door has been kept intact, alongside the coffered ceiling and square pilaster columns topped with Corinthian Capitals located in the lobby and restaurant areas.

It’s clear Zobler loves his job as he walks through the hotel. “I wanted people to feel like they were in Europe, but also that they’re part of this new, revitalized Los Angeles, which celebrates its historic architecture,” he said, explaining that he spared no expense in restoring the landmark building while adding his own touches. For example, the new terrazzo floors in the entrance have the hotel’s signatures worked into the design, as do the doors. The green velvet that adorns the two-story Palm Court windows and sofas was also painstakingly chosen to evoke both old and new.

NoMad’s restaurants and common areas have fast become a place for design and fashion aficionados that prior wouldn’t stay anywhere but Beverly Hills or West Hollywood, as well as the new hipster professional class that call downtown home.

In addition, the street-facing Coffee Bar is modeled after the iconic 300-year-old Caffè Florian in Venice, Italy, and offers an Old World alternative to Starbucks, where patrons lean against the marble counters and bar tables while sipping espresso. The lobby-level Giannini Bar retains most of its original dark woodwork, while new pieces like an iron lamp and communal tables were created to look seamless. Tucked behind that is another velvet-draped room for more privacy.

The retail concept store, called The Lab — by French art collectors Emmanuel Renoird and Nicolas Libert who founded Please Do Not Enter in downtown L.A. — will open this week. The contemporary art gallery and boutique will feature curated works exclusive to the space. The first exhibit, running March 15 to April 8, is called “Short Memories” by Da Vetro, a limited-edition glass collection created by young artists from the Italian design center, Fabrica; and Molo, a design and production studio based in Canada.

Designed by French architect and designer Jacques Garcia, each of the 241 guest rooms look to Italy for inspiration, including a color palette drawn from the fully restored gold and blue ceiling in the lobby. Each room has custom furnishings and original artwork from Paris and New York-based design studio Be-poles with many also featuring freestanding pedestal bathtubs and French doors. In short, what most people dream their own homes would look like.

The next opening in the Sydell portfolio is “Park MGM and NoMad Las Vegas,” two distinct hotel experiences under one roof. Park MGM is a new 2,700-room luxury resort opening this spring, while the 292-room NoMad Las Vegas launches later this year.

The “Line ATX” in Austin, Tex. (the third Line hotel in the group) will also debut in this spring and is a complete reinvention of an iconic,mid-century building originally built in 1965. Get ready to book your SXSW 2019 rooms now.