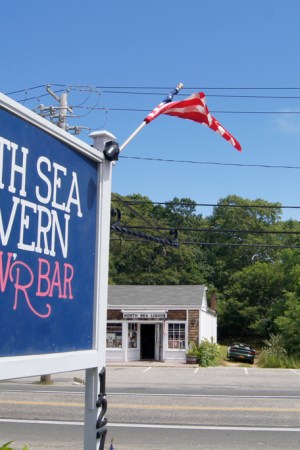 The latest restaurant to join the Hamptons dining scene opened Friday in Southampton.

North Sea Tavern & Raw’R Bar is the brainchild of a handful of Manhattan restaurateurs who claim they’re bringing the concept of “boat-to-table” to Long Island. Imagine that.

Sandy Lee Hall, the executive chef, says the menu will rotate based on the freshest catch from the local fishermen.

Still, he says, his goal is to bring to the beach the downtown edge of his farm-to-table restaurant in the Lower East Side, Black Tree. (The other partners are Cletus McKeown, the manager of TriBeCa’s The Wooly, and Jon Pirozzi of the sports bar Stone Creek Bar.)

While Hall is well settled into the downtown dining scene, he says the crowds out east present a new challenge. “In the city you can do whatever you like, and if it’s good, people are accepting of it — even if it’s a little weird,” he says. “Out in the Hamptons, it has to be a certain way. You need to be very accommodating. But it’s a chance to do something different and explore a new avenue of food.”

The new venture is also an opportunity to take his farm-to-table philosophy out to sea. “At Black Tree, we source everything within 300 miles — including at the bar, where we don’t keep citrus,” he says. The same approach will apply to North Sea, where sustainable sourcing is central to their mission. “We keep things as close to wherever we’re working,” he continues, focusing on “not overusing one fish and using what they have a surplus of.”

Hall says he will present known seafood classics, but with a twist. “Everybody has mussels out there, but I do mine with blueberries, mint and hot peppers,” he says. Also unorthodox are a red snapper dish, served inside a coconut, and a vegetarian ceviche, made with green tomato.

Hall, though, reserves most of his praise for a dish with a tough ingredient, the bluefish tacos.

“People say it’s hard to make, but this is just slow roasted with coconut and I make a chimichurri out of pineapple mint,” he says, sounding satisfied.

Locals might appreciate another item on the menu, the sourdough rye toast. It’s topped with mustard, ricotta and a tuna gravlax Hall cures in-house, but it comes from a place far, far away from the Lower East Side: Southampton’s own Blue Duck Bakery.