Oleanders Restaurant to Open in Brooklyn

Two of the neighborhood’s most prominent restaurateurs, Joe Carroll (Fette Sau and St. Anselm) and Francesco Panella (Antica Pesa) are at the reins, taking over the space vacated by the hotel’s previous eatery, the Elm. 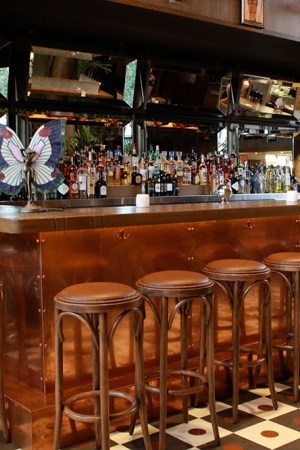 It’s time for a makeover.

The dining space at the McCarren Hotel and Pool in Brooklyn’s Williamsburg neighborhood is getting the fern bar treatment with Oleanders opening on June 12. Two of the neighborhood’s most prominent restaurateurs, Joe Carroll (Fette Sau and St. Anselm) and Francesco Panella (Antica Pesa) are at the reins, taking over the space vacated by the hotel’s previous eatery, the Elm.

“I wasn’t interested in opening up another whiskey bar in Brooklyn, with the same turn of the century decor — who cares?” Carroll said. “And this is so the opposite of that.” The restaurant is a sleek version of the fern bar concept with green enamel tables, kitschy salt-and-pepper shakers, and animal caricatures all give the space the proper time warp.

The menu is also chock-full of familiar throwbacks: coq au vin, beef Wellington, Clams Casino, lobster thermidor, and a reimagined classic shrimp cocktail. “If I start now, we’d finish tomorrow!” Francesco said enthusiastically of trying to pick a favorite dish. For his partner, the stand out is easy: “the potato skins. They are so simple, but I just f—ing love it.” Their spin will be of the era but decidedly luxurious, with crème fraîche, chives and a salmon rub.

The restaurant features a lengthy copper-capped bar, which will proffer drinks in line with the restaurant’s Eighties theme. “I’ve joked that the people who are doing craft cocktails now know more about the 1880s than the 1980s,” laughed Carroll. Oleanders throws it back with forgotten favorites like lemon drops, mudslides, and Long Island iced teas, all crafted by James Beard Award winner Dale Degroff.

Todd English-trained chef de cuisine Kevin Chojnowski jumped at the chance to revisit the plethora of French dishes he learned in cooking school but hasn’t prepared since. “We’re going to be exposing people to something new, which is the fun and interesting part of doing a restaurant: not only to nourish people and give them a good experience, but to teach them at the same time. Especially in New York, the diners are educated people, and they want to be educated diners as well.”

“In general, the buttoned-up culture of restaurants is going away,” Carroll said of New York’s culinary scene. “Especially in Brooklyn.”