On the Grid This Spring

Spring blooms with the freshest new launches in fashion, food and fitness. 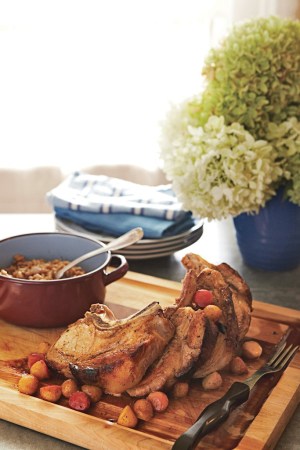 Spring blooms with the freshest new launches in fashion, food and fitness.

This spring, Equinox gyms will introduce ShockWave, a cross-training class co-created by champion rower Josh Crosby that features the Indo-Row — a machine that uses actual water to re-create the intensity, feeling and sound of rowing. Among the locations offering ShockWave is the newest Equinox in Marina Del Rey, Calif., which opens in April and is the gym’s 55th U.S. unit.

Rande Gerber, creator of The Whiskey Bar and Stone Rose nightlife concepts (and husband of Cindy Crawford), teamed up with sixth-generation Puerto Rican rum-maker Roberto Serrallés to create the new premium Caliche Rum, which hits stores this month. The duo blended rums aged up to 30 years for an ultrasmooth spirit with hints of vanilla, caramel, citrus and oak.

The South Beach hotel scene will get a sleek new addition in May with the opening of the SLS, designed by Philippe Starck. The 140-room beachfront hotel is importing its Bazaar by José Andrés restaurant concept from its Los Angeles location and also offers an 8,000-square-foot Hyde Beach pool and beachfront relaxation oasis.

The Paul Smith flagship on lower Fifth Avenue in New York is celebrating its 25th anniversary this spring with a limited edition collection of bags, accessories and T-shirts, all with “Big Apple” motifs — including this zippered carryall that retails for $450.

Two of Tokyo’s hottest figures in men’s wear, Takeshi Osumi, the designer behind the label Phenomenon, and Yuichi Yoshii, owner of The Contemporary Fix boutique, have partnered to launch a new brand this
spring called Mr. Gentleman. The line, sold at TCF locations in Tokyo and Hong Kong, as well as Colette in Paris, features sporty pieces with a Sixties vibe in vibrant colors. —Amanda Kaiser

Few brands are as blue-chip as the seven storied universities and one college of the Ivy League. In The Ivy League (Assouline; $65), Harvard alum Daniel Cappello plumbs the histories, myths and defining characteristics of each school, with plenty of trivia and archival photography.

NEXT: James Bond for Omega >>

To celebrate the 50th anniversary of the James Bond film franchise this year, Omega will release a special 007 version of its Seamaster Diver 300m watch, which has been worn by the fictional superspy in every Bond film since 1995’s GoldenEye. Available in May, a 41-mm version will retail for $5,000 and a 36-mm version, adorned with a diamond at the seven hour, will sell for $5,200.

NEXT: Robert by Coach >>

Coach is making a foray into fashion sneakers with the Robert style, available in its men’s boutiques in April. The $358 design is made in Italy from burnished leather with vachetta laces and available in tan or white models.