Declining viewership and esoteric films be damned: For fashion and beauty's biggest names, the Oscars red carpet is still the holy grail.

In 2020, L.A. was buzzing in the lead-up to the Oscars. Tom Ford’s star-studded runway show drew Jeff Bezos, Miley Cyrus and Lil Nas X, fashion brand and magazine events fanned out over days and nights with Champagne and swag flowing, and the effect of so much primping even trickled down to the city’s booked-solid Dry Bar locations.

What a difference a pandemic year makes.

Still, the mostly digital award season will end on a high note Oscars Sunday with the return to a live red carpet at L.A.’s Union Station, albeit on a much smaller scale, and a new, more cinematic show format with a theme that could change every year like the Met Gala’s does, according to coproducer Steven Soderbergh. (This year’s tag line is “Bring Your Movie Love.”)

“Red carpet fashion still matters, in my view, as a moment of escape and dreaming, which is probably more relevant now than it ever was before. I am saying this from the perspective of a very pragmatic designer and entrepreneur,” said Giorgio Armani, who more than any other designer has been responsible for the rise of Oscars red carpet fashion, going back to dressing Jodie Foster in 1992.

“I understand a momentary lack of interest now that things have gone virtual, but it will matter again, and actually it already does,” he said, noting how Cate Blanchett and other stars have been leading the charge for sustainability by rewearing his clothes on red carpets.

“Now that there’s more vaccinations, and we know the numbers are lower, we want glamour, excitement and joy. That’s what the Oscars is all about,” said Hollywood stylist Jessica Paster, who is dressing “Borat Subsequent Moviefilm” best supporting actress nominee Maria Bakalova.

Nominees like Bakalova and their plus-ones will be the only people live on the red carpet, where there will be just a handful of media outlets and no publicists, cutting down to dozens a crowd that usually numbers in the thousands. What will they wear?

At the virtual Golden Globes back in February, “Nomadland” director Chloé Zhao kept it refreshingly real, along the lines of her extraordinary film, accepting her award remotely while wearing no makeup and an Army green T-shirt.

But Oscar attendees are being encouraged to bring the glitz. 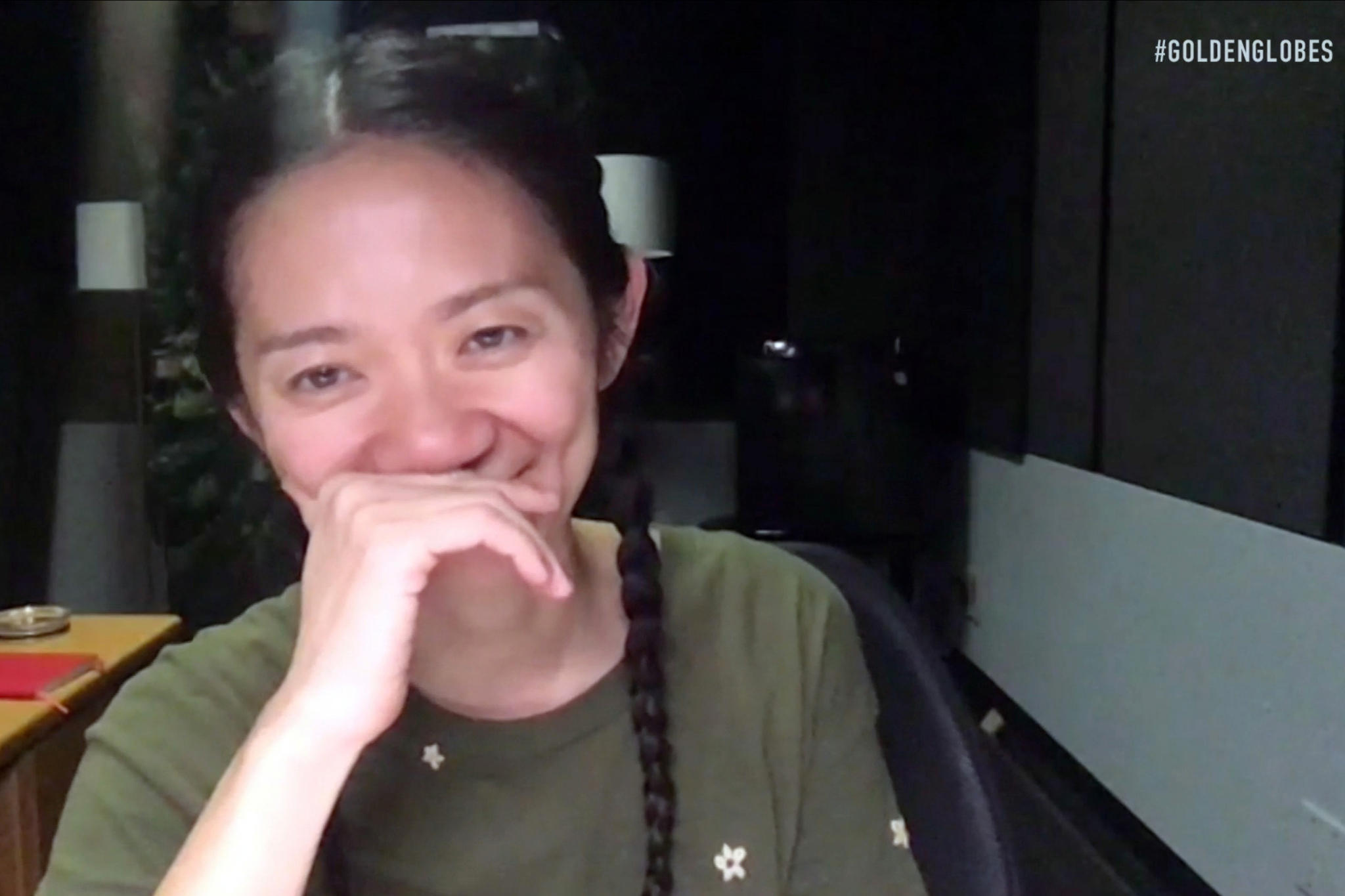 “We’re aiming for a fusion of inspirational and aspirational, which in actual words means formal is totally cool if you want to go there, but casual is really not,” is how the dress code was explained in a widely published email from the show’s producers.

Will it all draw in viewers is a question, with award show ratings already hitting historic lows, and this year’s nominated films, led by “Mank,” a particularly esoteric and little-watched bunch, especially compared to current box office behemoth “Godzilla vs. Kong.”

Nevertheless, for fashion designers and brands, the Oscars red carpet is still the holy grail.

“It’s a horrible year, I have had so many chats with stylists who say, ‘If it doesn’t happen, don’t worry, nobody is going to watch it anyway,'” said Oscar de la Renta designer Fernando Garcia of why the red carpet still matters to him. “I don’t care. It’s more about a connection with whoever wants to support your vision as a designer. Celebrities connect people who aren’t celebrities with brands.…That’s why I fell in love with fashion so I will always be inspired by it.”

Coming off his 40th anniversary collection and Broadway preshow, Michael Kors also has high hopes for this year’s red carpet.

Smaller fashion brands are still in the game, too, competing against luxury houses and jewelers, some of which pay $150,000 or more for a celebrity placement and have the funds to spend on custom designs. “It’s the worst year yet with fewer opportunities, and when the pressure is on for designers who haven’t been able to sell anything and PRs who don’t have the same budgets,” said a publicist who requested anonymity.

Another reason the 2021 Oscars is still worth the effort and expense is Instagram.

In the absence of physical red carpets this award season, stylists have filled the fashion void with behind-the-scenes backyard photo shoots for social media that have had editorial-level polish and substantial influence.

“Because there were not traditional red carpets, talent and stylists had to stage photo shoots, and you ended up getting this gorgeous content that was more thoughtful and a little more produced. To brands, these assets have been incredibly valuable,” said IHPR founder Jen Lowitz, who represents jewelry brands Forevermark, Fernando Jorge and Ana Khouri in her L.A. showroom. 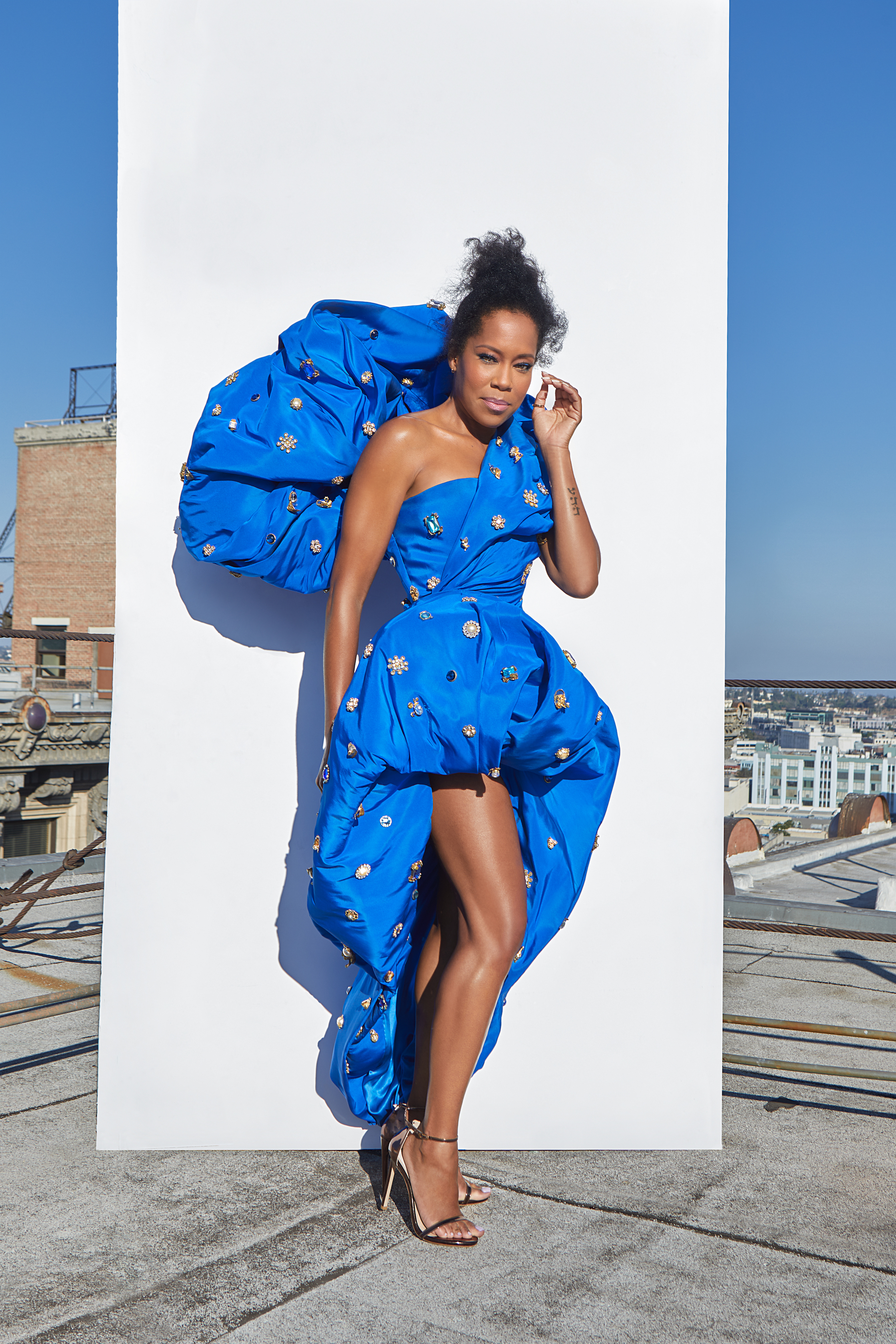 Behind-the-scenes shot of Regina King in Schiaparelli haute couture for the virtual 2020 Emmys.  Courtesy of Schiaparelli

Forevermark was turned on to “One Night in Miami” director Regina King this season after wanting to work with her for years, seeing her wearing a dramatic blue, high-slit Schiaparelli gown in a shoot styled by her stylists Wayman Bannerman and Micah McDonald for the Emmys in September 2020. She ended up wearing jewelry by the brand for the Golden Globes in February.

Still, as much fun as producing creative at-home content has been, even Hollywood image makers used to being behind the scenes are missing the real life thrill of the red carpet. Not to mention all the award season schmoozing up-and-coming talents like Bakalova rely on to help secure future roles and fashion opportunities.

“This is her first American movie, she’s done nine in Europe. She’s 24 years old, if this would have been a normal year, by the time she stepped on the Globes red carpet in Armani, everyone would have known who she was,” said Paster. “Now, it’s more of a slow burn.” 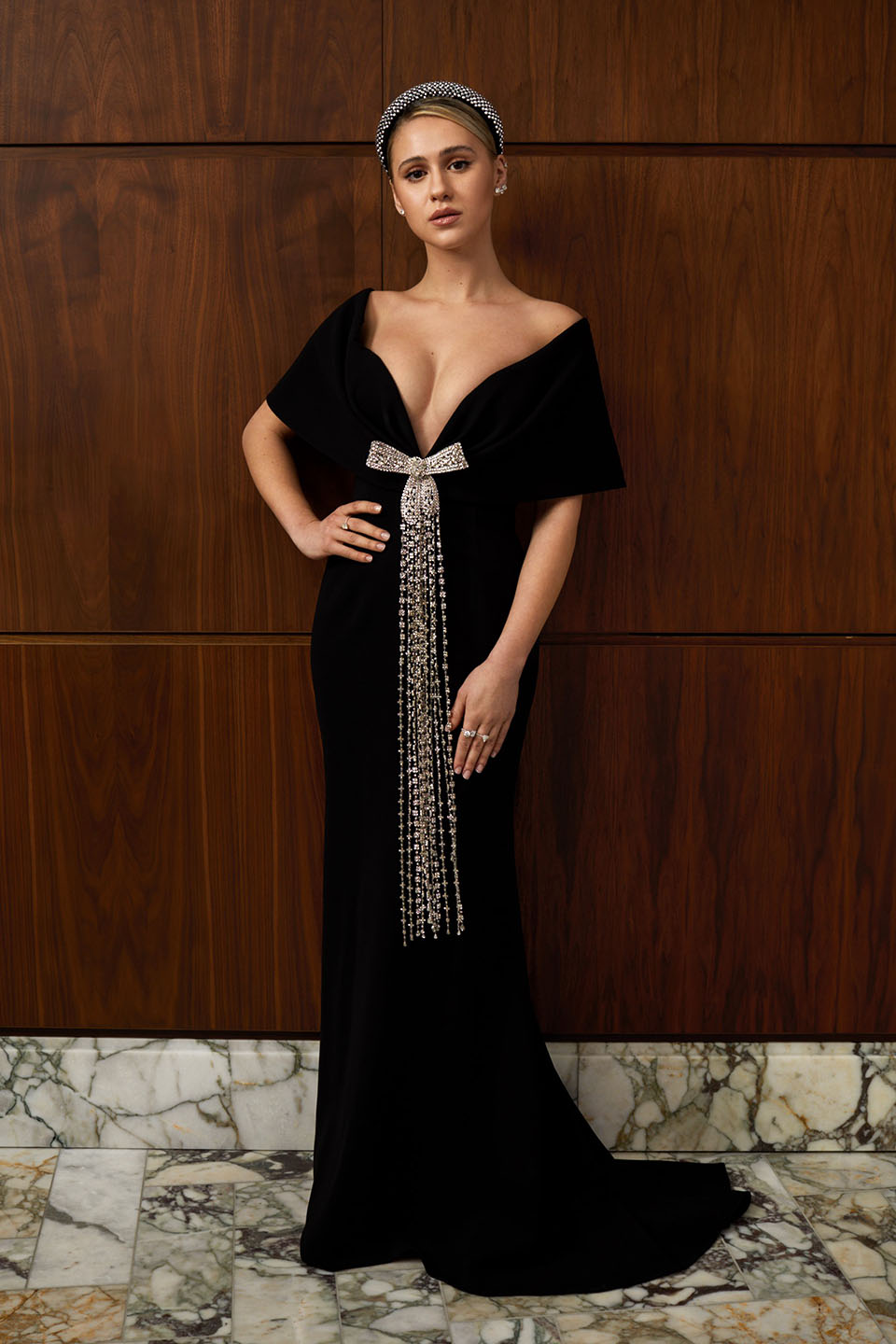 Maria Bakalova in Prada at the virtual Critics Choice Awards.  Courtesy of Prada

That other platform for fashion peacocking, Oscars after parties, will be nonexistent this year.

There are still a few places to see and be seen IRL during Oscars Week in L.A., which rebounded from being the global hotspot for COVID-19 in December to having one of the nation’s lowest case rates now.

German facialist Barbara Sturm is hosting a four-day “Anti-Inflammatory Oscars Retreat” (the name really is spot-on for the times) at her spaceship-like West Hollywood spa, which on Wednesday was stocked with hundreds of fragrant pink roses for selfies, fresh juices — and face masks.

“I’ve been coming here since 2003, and how I started promoting the brand was during Oscars pop-ups,” said Sturm. “Rosie [Huntington-Whiteley] and others would post on their Instagram, and it was the first time they started showing off beauty treatments for social media. That’s when my brand got a big boost because people could see what we were doing.”

In the midst of a global expansion, Sturm opened the L.A. location on Almont Drive in November, and promptly had to close it again two weeks later because of a new lockdown. “Now that we’re fully reopened, it’s organic to invite everyone in — and we’re fully booked,” she said. Visitors to her spa (one treatment room has a hidden VIP entrance from the alley) can try her Signature SturmGlow Facial or Super Anti-Aging Facial, as well as eye brow shaping by Hollywood arch queen Anastasia. 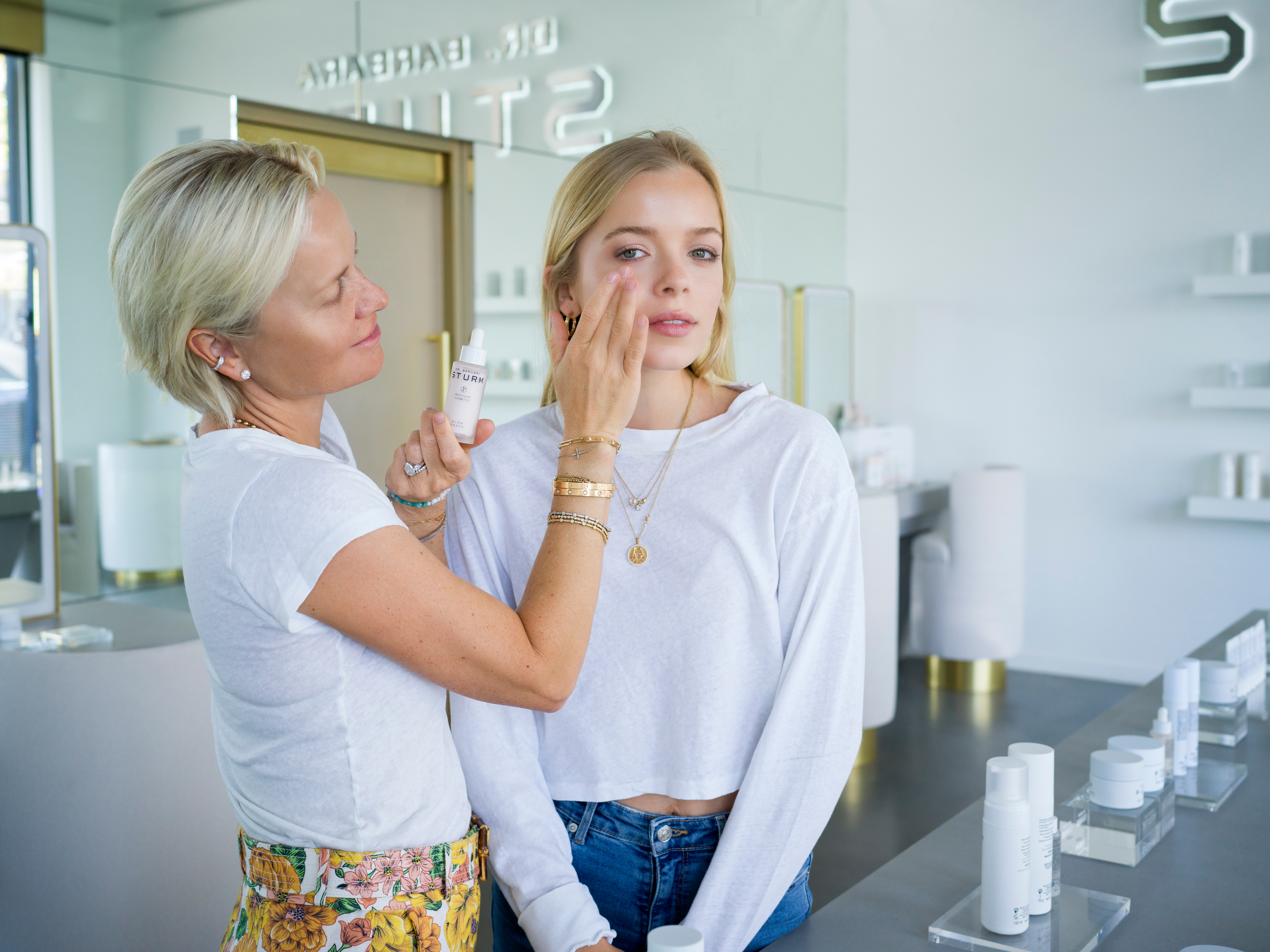 Meanwhile, Dior Skincare’s Joanna Czech has set up shop at the Peninsula Hotel, where Carey Mulligan, Maya Rudolph and others are slotted for treatments incorporating the brand’s new eye serum.

L.A.’s dining scene is heating back up, too.

At Jeff Klein’s Sunset Tower, the outdoor Pool Deck has become the new spot for Hollywood regulars to mingle with emerging TikTok-ers, if not for the whole casts of nominated films who used to dine together during previous award seasons.

“I think the industry has done all its Oscar campaigning on Zoom, because the cast can sit at home in their knickers,” said former Condé Nast editor-turned-Sunset Tower maître d’ Gabe Doppelt, admitting she’s seen her share of guests wearing sweats — ones that say Off-White, that is.

While the restaurant has stayed closed Sunday evenings through the pandemic year, it will open Oscar night and has booked tables for several nominees. “They can wear whatever they like,” said Doppelt, “And anyone who wins eats for free.”