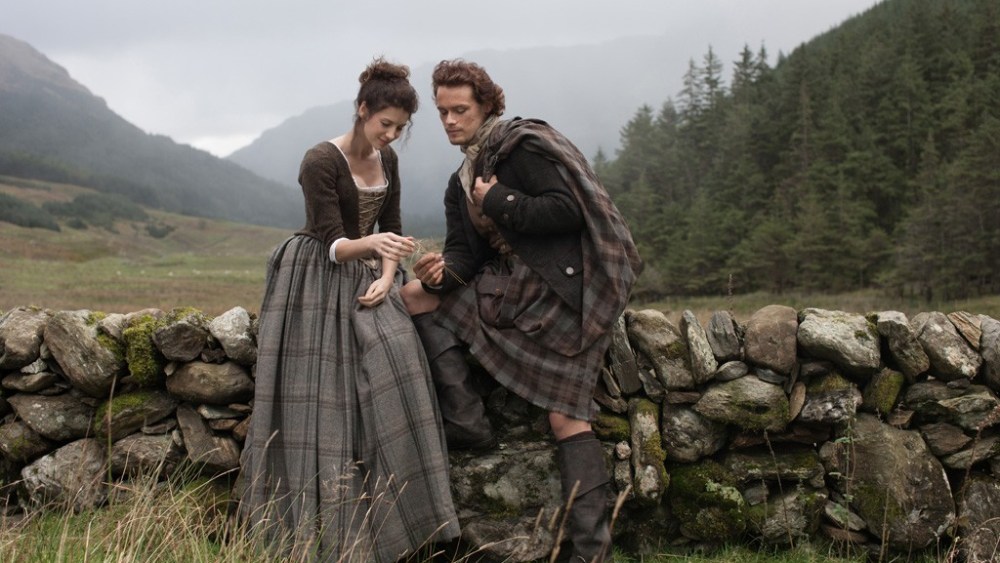 The Starz cable network has become known for lavish historical dramas like “Spartacus” and “Magic City.” Its latest, “Outlander,” presented a greater challenge, at least for the costume designer, in that its setting is 18th century Scotland.

Set to air Aug. 9, the Sony TV-produced series is based on the popular bestselling “Outlander” novels by Diana Gabaldon, which have developed a cult following worldwide. The story line follows Claire Randall, an independent and modern nurse who mysteriously goes back to a century where women were treated as property. In what ignites into a passionate relationship, she is forced to marry the Scottish warrior Jamie Fraser in order to save her life. But here lies the dilemma: Her heart is torn between two very different men — the suave English husband she left behind and the romantic Scot.

Costumed by Terry Dresbach, who is married to executive producer Ronald D. Moore, the series aims to stay true to authentic Scottish apparel as well as hairstyles of the era. Asked what her biggest challenge was prepping for her role, Caitriona Balfe, who plays Randall, replied, “Getting my hair permed, because the character had very curly hair. Oh, and the costumes were so heavy, really heavy wool, almost the equivalent of wearing a heavy blanket. Scotland is such a cold, wet place.”

Balfe described her costumes for the freshman 16-episode series, which finishes filming its second season in Scotland in August, as ranging from “stylish, comfortable clothes of the Forties to a real pain of being all tied up in unacceptable corsetry” of the 1700s.

Learning how to wrap a kilt the Highlander way was the biggest challenge for Sam Heughan, who plays Fraser. He said getting the authentic kilt formula was serious business for the series.

“She went back to the original materials and used berries to create the colors and tartans,” Heughan said, referring to designer Moore. “Different clans didn’t go out of their way to create specific colors. They just used the plant life around them, and it all blended very well with the background. It was great camouflage.”

The garments had other strategic uses as well. “Kilts were used as a shield wrapped around the arm, and the wool would keep you warm. Even when the wool would get wet, it didn’t get you wet,” the actor continued. “Highlanders used to soak their tartans in water, and it would freeze on them and act like a protective igloo.”

The historically accurate costume design created difficulties for the actor as well.

“I had to go to a few weeks of boot camp to learn how to wear a kilt and ride horses,” Heughan said. Still, “Riding in a kilt is far more comfortable than riding in trousers, because of all of the padding.”