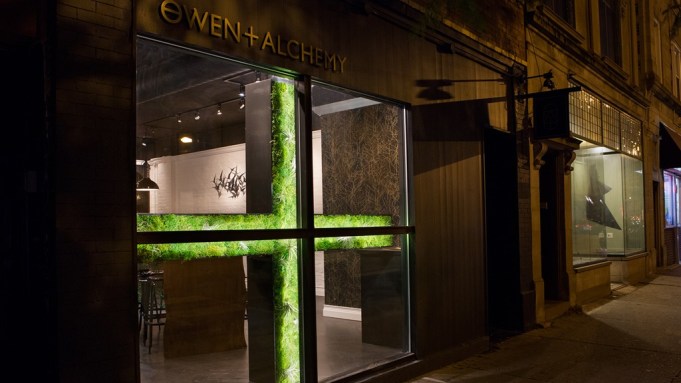 Owen + Alchemy opened its doors in Logan Square last fall and already counts a roster of A-list fans: Creatures of the Wind, Fitz and The Tantrums, Cage the Elephant, The Black Keys, John Cusack and more. “Boy George is a raw vegan, and we provided juice for him in his room. He loved it and tweeted about it,” said co-owner Anne Owen, 35, a former magazine publisher turned juice guru. Owen opened the boutique juice bar with Jared Van Camp, 36, a chef and partner at leading restaurant group Element Collective. “It’s really exciting to see how people are responding to it. It shows people are ready for this,” Owen said.

The 1,000-square-foot store, located at 2355 North Milwaukee Avenue, serves cold-pressed juice — a technique that provides the most nutritional bang for the buck. Unlike centrifugal juicing, whose spinning blades create heat while making the juice — which some argue takes away the nutritional benefits — cold-pressed juice uses a hydraulic press to crush the fruits and vegetables and extract the juice.

“It keeps it cold and raw so the enzymes and nutrients remain intact,” Owen said. “You’re getting 100 percent of the nutrients undamaged from the fruits and vegetables. It’s like three to five pounds of fruits and vegetables in one bottle. It makes it very convenient to get all of your greens and fruits in a really easy-to-digest way.”

The plant-based menu features eight different categories of juice, priced from $9 to $12. The 16-ounce juices, served in eco-friendly glass bottles, range from “green” to “root” to “fermented” to “nut/seed.” Juices are named by numbers; for instance, “01” is a green concoction of kale, parsley, romaine, celery and apple, while “54” is a nut drink made from raw hazelnut, cacao, cinnamon, vanilla bean and local raw honey. Shots of immune-boosting tonics, like turmeric or ginger, are $3 each. For something to eat, not drink, the menu offers a variety of “bowls” — imagine a hearty helping of kale, açaí berry, blueberry, almond butter, spirulina, dates and hemp seed.

When creating the recipes, Van Camp said he’s looking for perfect harmony and balance — the juice equivalent of Heinz ketchup or Coca-Cola.

One of Van Camp’s favorite juices on the menu is the “heirloom tomato with organic Himalayan sea salt,” also known as “42.” The drink is made using tomatoes from local farmers, bought in-season and then frozen.

“It’s just two ingredients. We’re so used to canned tomato juice. This is fresh, raw heirloom tomato with sea salt. It tastes like you’re biting into a tomato in the middle of the summer,” he said.

The menu is comprised of several non-fruit based juices on purpose. As a Type 1 diabetic, Van Camp said this was for selfish reasons. “If it’s all fruit, I can’t really drink it. It was my own desire to have a lot of juices that didn’t have a high glycemic index. I can have the green juice and not see my blood sugar spike,” he said.

Looking back, Owen said they were worried there wasn’t enough of a market in Chicago to open a juice bar.

“A lot of people here have never had a green juice,” said Owen, who plans to offer delivery nationwide. “It’s fun to be able to bring something new to the city that’s not been done before. And some of the bigger brands are helping to educate the consumer. People have asked me, ‘are you scared that Starbucks is getting into juice?’ No, not at all — they’re educating people on a mass level.”