Moore From L.A.: Palm Springs and Joshua Tree Are Booming as Pandemic Escapes

The desert is calling — and people are answering for a weekend, a month and permanently: "It's the vacation in your backyard."

Next year’s Palm Springs Film Festival has been canceled, Coachella and StageCoach are TBD and Modernism Week has been scaled back to a mostly virtual event.

But the desert is still calling — and people are answering, for a weekend, a month and permanently, enjoying the big sky and outdoor vistas Southern California has to offer year-round.

“The revitalization of the desert started with the popularity of Coachella and the opening of the Ace Hotel — that was the beginning of Millennials coming in with cool boutique hotels, restaurants and bars. But we’ve seen an influx because of COVID-19,” said Matthew Kurtz, owner of Les Cactus, a nudist resort that became a 27-room boutique hotel with a chic pink and green, Cal-French aesthetic and casual vibe that had a full, socially distanced house during a recent visit in October.

Kurtz, who got his start running the front desk at the Chateau Marmont, opened Les Cactus after a six-month renovation last February only to have to shut down for March, April and May, Palm Springs’ busiest season. Now, the tourism industry is starting to rebound, he said, despite Riverside County sliding back into the purple tier, which prohibits indoor dining for one, due to worsening COVID-19 numbers at the end of October. “We are selling out weekends, and things are starting to pick up during the week because people are itching to get out,” he said. 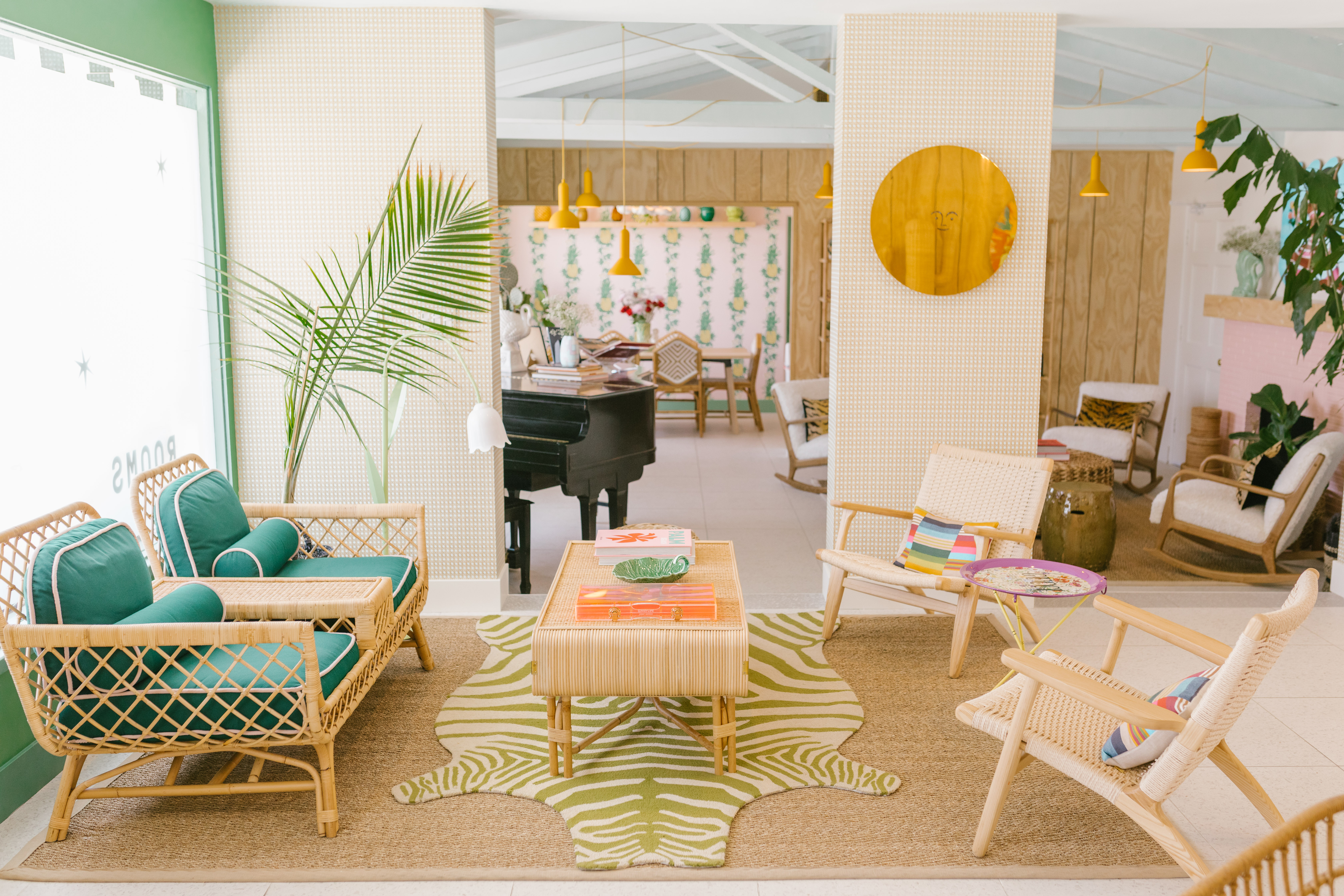 The lobby of Les Cactus.  Courtesy

Other cooler, hipper businesses have also opened in the area, including local microbrewery Las Palmas Brewing and a permanent brick-and-mortar location for the Mojave Flea Market at The Shops at 1345, the stylish collection of retail boutiques that includes Soukie Modern with Turkish towels, Moroccan rugs and caftans; Lindy curated vintage decor and jewelry, and Man About Towne with terry cloth camp shirts by Oas Company and other resortwear.

“We like to think it’s what Fred Segal used to be,” said James Morello, who pandemic-pivoted from live events to open the Mojave Flea Trading Post in July, featuring clothing and home accessories by 35 makers, including repurposed vintage bandana pieces by Utori out of Joshua Tree and shibori-dyed clothing by The Highlands Foundry out of Hudson, N.Y.

Business has exceeded his expectations, he said, adding that it’s a mix of weekend visitors, kids who have moved back in with their parents, and transplants. “Just like the young tastemakers from Brooklyn have fled New York for the Hudson Valley, the same thing is happening here.” 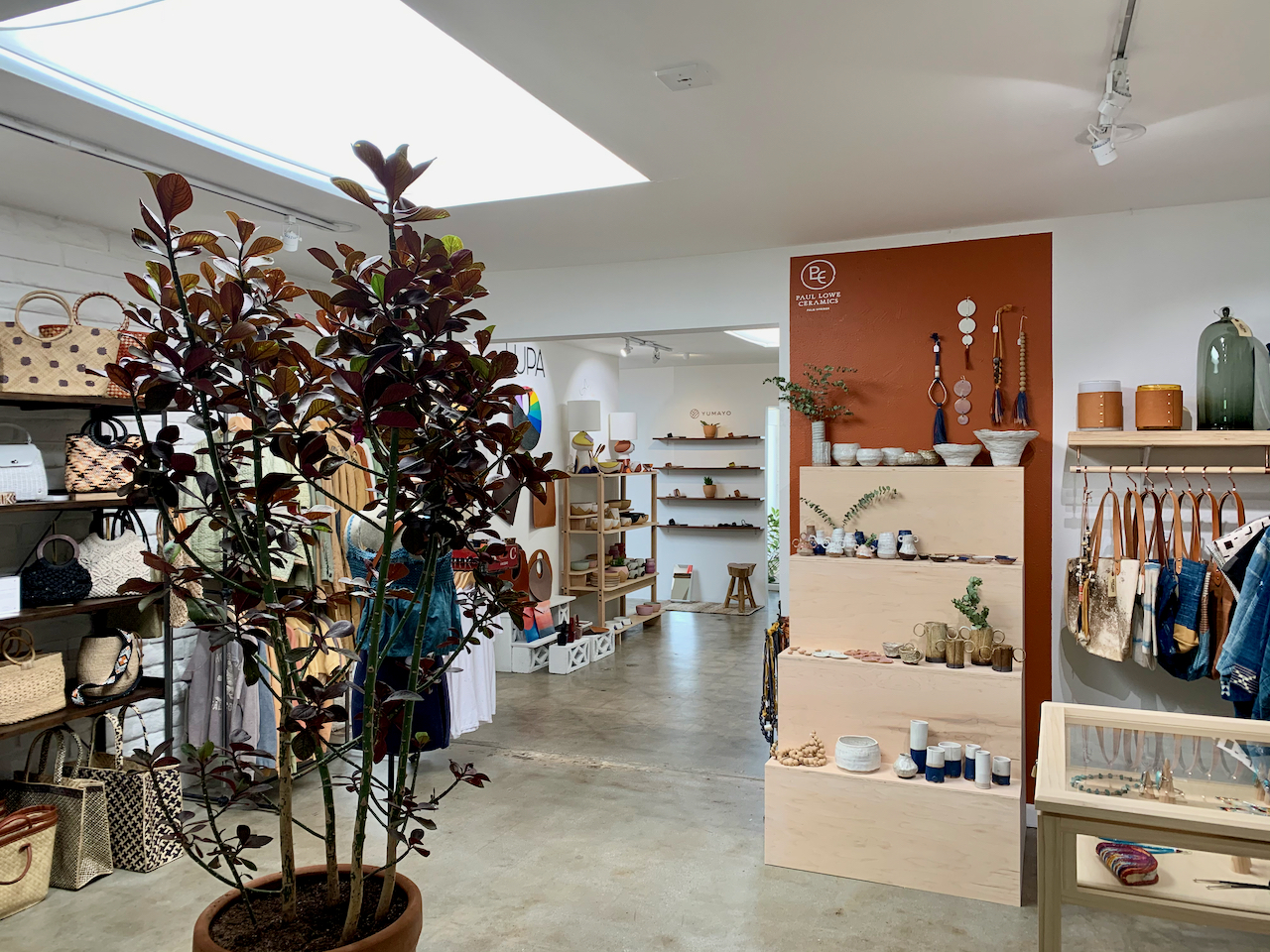 Meanwhile, across the street from the Ace Hotel, next to the Kreem artisanal ice cream shop and Dead or Alive wine bar, Millennial-loved, size-inclusive Los Angeles apparel brand Big Bud Press, known for its whimsical boiler suits and tie-dye fruit tees, is opening a retail store in December, the fourth for the label.

“Even though we’ve been delayed a few months, we have full faith in the project and think it will be a great addition to the area,” said cofounder Philip Seastrom. “No one can travel abroad, which is what it was like 50 years ago. Palm Springs has that classic allure again. It’s the vacation in your backyard.”

“There’s just a lot more going on, and the demographic has skewed younger,” said longtime Palm Springs booster Trina Turk, who opened her boutique on Palm Canyon in 2002 and has expanded it twice.

The pandemic has accelerated the influx of transplants from big cities like L.A., San Francisco and Seattle who are snapping up the relatively affordable real estate, and a new creative class is emerging that’s younger than the area’s age-old retiree community. 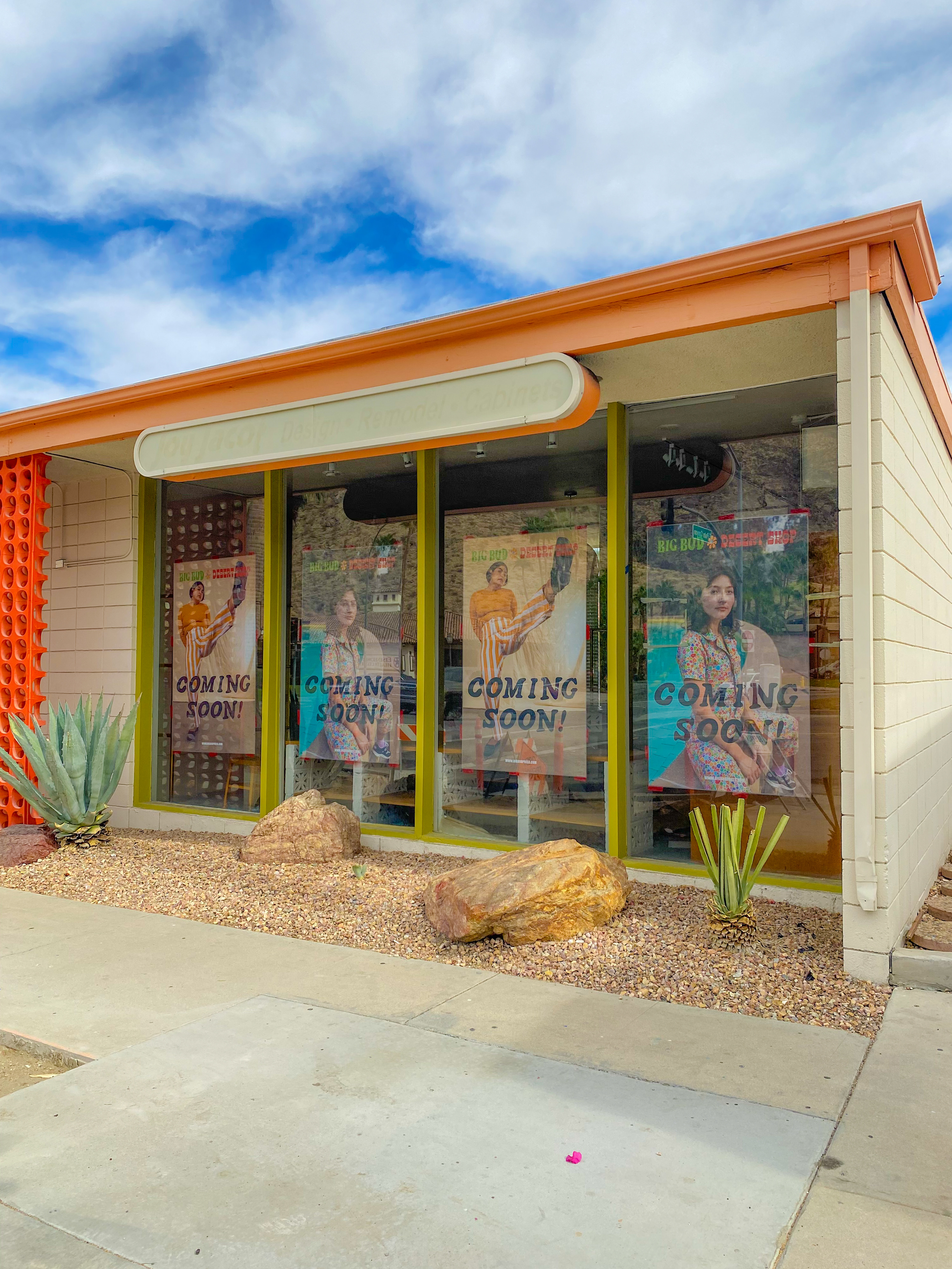 “The market is hot,” said Brad Hudson, a real estate broker at Bennion Deville Homes, noting inventory is low and prices are up about 16 percent from 2019. “Before, it was a casual market, where people would come for weekends, look for houses, and maybe buy in a few months. Now, people are very serious and things are going under contract in just a few days.”

“It’s happening so quickly, I have never seen anything like it,” said Steven Biller, who has been editor of Palm Springs Life magazine for 18 years. “It’s encouraging to have more people here who are working for a living and not just retired, who will be contributing to the local economy and hopefully bringing more innovation and creating jobs.”

Men’s stylist Dave Thomas, who works with John Legend, Lionel Richie, Henry Golding and others, moved from L.A. to Palm Springs in May. “I’m not expected to see clients face-to-face like I used to. I can be somewhere else,” he said. “If there is no cinema, theater or social events, why not embrace a more suburban life?”

“The natural beauty here is so inspiring. It’s Shangri-La,” said Bryan Rabin, whose L.A. nightclub Giorgio’s popped up at the Palm Springs Film Festival in 2019. “I’m more creative now than I have been in years,” said the events producer and owner of DNA celebrity merchandising, who also moved to the desert full time and is eyeing a permanent club concept to open post-COVID-19.

While Palm Springs retains its midcentury Modernist cocktail culture aesthetic, the high desert towns of Yucca Valley and Joshua Tree that are a 40-minute drive away are more rustic bohemian with a Western twist. The area has also been seeing an increase in traffic and transplants these pandemic months.

“We had an off period when we had to close down, but outside of that we’ve been doing far better than expected,” said Mike French, co-owner of Pioneertown Motel, located northwest of Yucca Valley, which opened six years ago when the high desert’s renaissance began, and has hosted events for Dior and other big brands.

The motel was built for Gene Autry, John Wayne and other actors to bunk down while working in the Western film set town, and renovated by brothers Mike and Matt French in 2014. “The desert has exploded — the going line is that the high desert has advanced 10 years in the last six months with people moving out here full time, investing in Airbnbs, and looking at different opportunities and ways to support living out here full time,” said Mike French.

Partnering with L.A.-based Last Word Hospitality, the French brothers opened the Red Dog Saloon in late August, refurbishing the 1946-era watering hole on the former movie set’s “Mane Street,” which also has a post office, trading post and handmade pottery shop. “We lucked out because we built walk-up windows into the program well before March, and that ended up being a huge win, and we’re serving our own canned cocktails with outdoor seating for 100 people,” Mike French said. 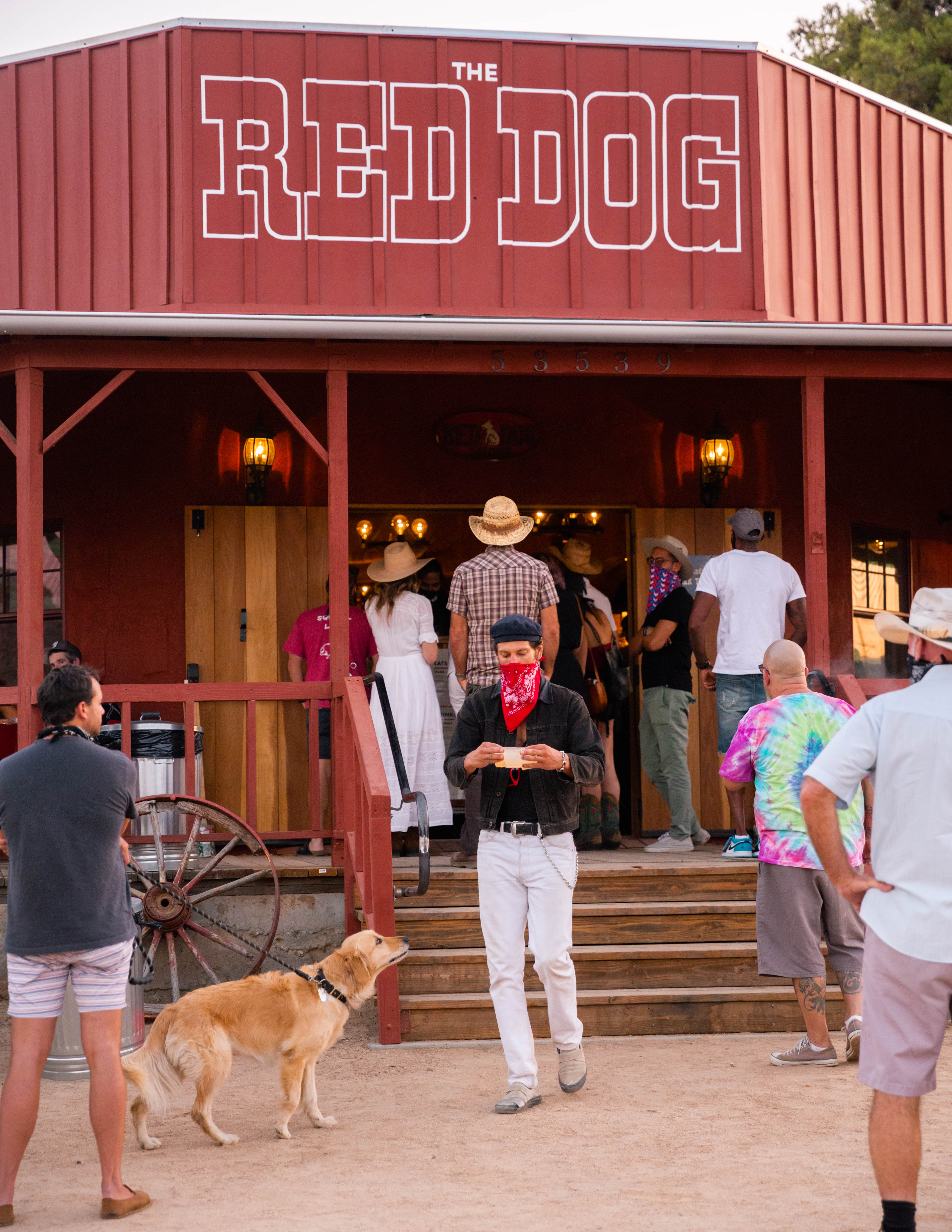 “There’s so much to do here outdoors,” said Biller, noting several area art events that are going forward in the spring of 2021, including Desert X, Joshua Tree-based Boxo Projects’ next exhibition and Hwy 62 Studio Art Tours.

In the meantime, visitors have been enjoying having space to hike mask-less in Joshua Tree National Park, with stops for honey turmeric lattes at Frontier Cafe, and shopping at vintage store The End in Yucca Valley. “I don’t ever remember being this busy,” said costume designer Kimi Buzzelli, in business since 2012, noting how she had kept the store open late on a recent Sunday to accommodate a dozen Hollywood creatives who were vacationing together after COVID-19 testing.

“There’s a lot of Airbnb people, but others are realizing now that they don’t have to work in an office they can choose a more quality life,” said Buzzelli. “It reminds me of when I lived in Echo Park before I had a computer and a phone — just slowness.” 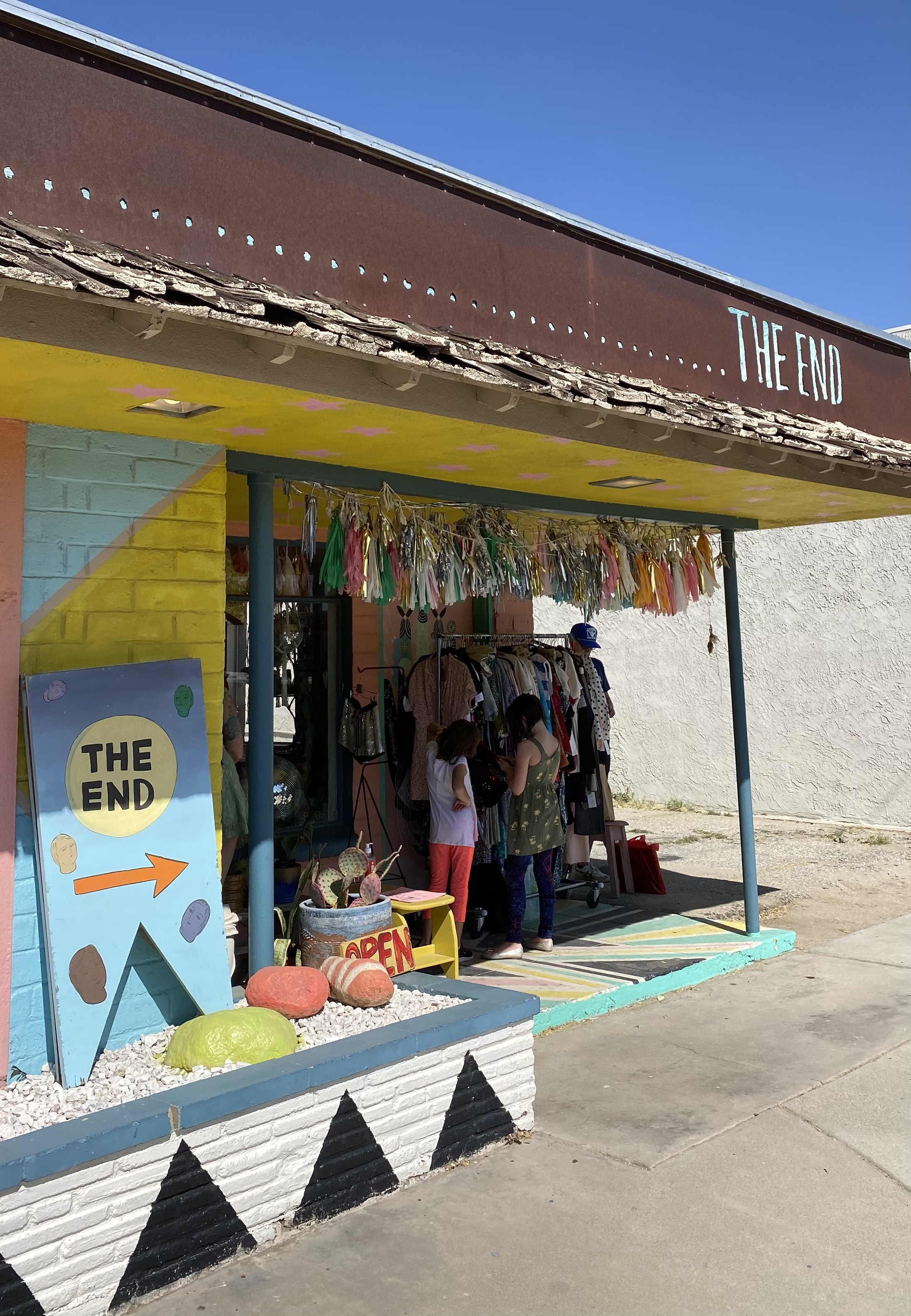