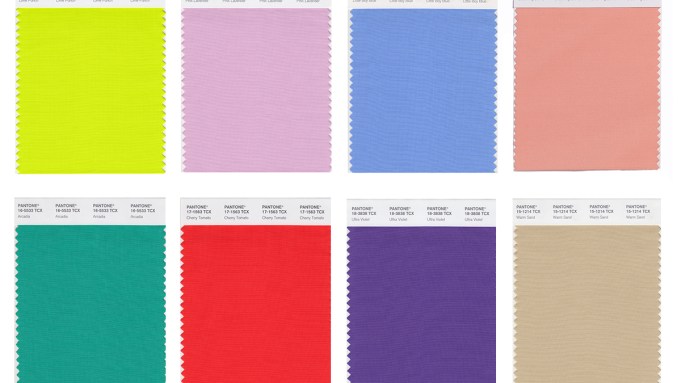 That’s the key shade for next season, according to Pantone’s Fashion Color Trend Spring 2018 Report. And with self-expression continuing to dominate fashion, the report is gender neutral and multifaceted to the tune of 12 colors, instead of the typical 10, with many unexpected colors making the list, according to Pantone Color Institute executive director Leatrice Eiseman. The fact that industrial, product and interior designers are embracing unexpected shades also resonates with people.

“The level of their expectations is increasing. The world of industrial design and product design is finally opening up to the idea of using more color. If people can see rose tones and metallics that are new, fresh and exciting in their electronics, they’re going to want to see it in shoes, accessories, clothing and fashion,” Eiseman said.

Whatever the impetus, colorists are game. “At Pantone Color Institute, we just love the idea that more consumers are more color aware. They’re really going to accept the idea there is more to choose from than less,” Eiseman said. “Designers are often the envelope pushers for sure.”

Meadowlark 13-0646
Considering that half of the U.S. population was expected to watch last month’s solar eclipse, yellow’s dominance in the spring forecast seems logical. And the skyward wonder will remain a conversation starter, according to Eiseman. “When these things creep into a designer’s mind, they kind of store them away like little nuggets until they are working on the next line. There’s no question using that bright color really is an attention getter,” Eiseman said, adding, “Regardless of what industry, yellow is a beacon of light. If you’re going to put something on your web site or in a window display, you know yellow is going to draw the eye. And nobody gets ignored wearing yellow.”

Little Boy Blue 4132
First Lady Melania Trump may have singlehandedly given this hue worldwide coverage thanks to the Ralph Lauren ensemble she wore to her husband’s inauguration in January, but the clear blue sky-inspired tone will be prevalent for spring 2018, too. Recent coverage and documentaries about Princess Diana, who favored blue, has brought the color back to the forefront of the fashion. The “expansive” shade hints at “the promise of a new day” and relays a “lovely, cooling feeling,” Eiseman said. The Mother Goose nursery rhyme name is meant to be a play on its genderless and trans-seasonal qualities. Boys, girls, women, men — Little Boy Blue works for everyone.

Chili Oil 18-1440
More commonly known as the crushed red pepper condiment used in Sichuan cuisine, this fiery shade does not exactly scream “vernal equinox.” Even Pantone colorists were surprised that it landed so high on the spring list.

This earthy, brown-based red is a great mixing color, transitional and “that touch of seasoning that you sprinkle into a spring wardrobe,” Eiseman said. Named to play into people’s interests in all things culinary, Chili Oil also serves as a transitional color. As a keynote speaker at the biannual International Home + Housewares, Eiseman said “what’s happening in the food and beverage area often tells us where we’re going with color.” Like Cherry Tomato, Chili Oil really “brings that piquant, spicy color with a lot of verve, that’s what we’re seeing in the food industry,” she said. Anna Sui seems to have gotten the message, using both shades for her Anna Sui x Inc. launch invitations.

Pink Lavender 14-3207
Like Blooming Dahlia, this violet rose hue is quieting. Venus Williams warmed up in Wimbledon leggings. And Rodarte’s Kate and Laura Mulleavy had their own interpretations of it on the runway in Paris in July. Monique Lhuillier included a Pink Lavender strapless, feathery gown in her first outing in the French capital.

Arcadia 16-5533
Greens have been all over the map in the last few years, but Greenery’s vibrant, organic cast made it Pantone’s 2017 Color of the Year. With half the world’s population living in cities today and 70 percent expected to be doing so by 2050, the public’s interest in the great outdoors will no doubt gain ground. “We are thinking of the preservation of what’s natural. That’s always our consciousness naming colors,” Eiseman said. “This color does well in very simple designs. It has two sides of personality.”

Ultra Violet 18-2828
Pantone is banking on this “wonderfully imaginative” purple that underscores originality and ingenuity that melds well with the entire field for spring. This complex shade may leave some wondering, “Is it more blue or more red?” (Blue-based is the answer.) But Ultra Violet is more modern and less prom dress when paired with Chili Oil.

Emperador 18-1028
Emperador is a rich chocolatey brown. But this of-the-earth hue is probably more “Game of Thrones”-inspired. “You can’t help but be influenced by the show and now the whole series is being reshown on HBO so that influence will go forward. It’s a darker tone but not as sinister as black might be. That earthy quality brings substance, which is very unusual for spring and summer.”

Almost Mauve 12- 2103
Versace and Zuhair Murad worked this petal-like shade into their respective couture collections. As the faintest of this season’s pastels, it sort of riffs on the other two. Gentle, ephemeral and floaty, Almost Mauve is ready-made for fabrics of the same ilk. With nostalgia in vogue, this romantic quiet color is reminiscent of another time and another place — post-War even, Eiseman said.

Spring Crocus 17-3020
This expressive fuchsia is meant to be a trans-seasonal, conversational favorite. Men and women are warming up to this one although maybe more as an accent. Just as Pantone hasn’t shied away from culinary undertones, the spring palette also encompasses the botanical — Pink Lavendar, Blooming Dahlia and Arcadia among them. But Spring Crocus is a wittier, more vital color that has an energy and sexiness from Eiseman’s point of view. This pinkish purple is flattering to an array of complexions. Eiseman added, “You will probably get a lot of compliments when you wear this.”

Lime Punch 13-0550
Puma, Mizuno, Salomon and Columbia Sportswear are a few of the athletic brands that have known the might of this neon. Ath-leisure labels followed suit, using bright punches of the color, not simply for fashion reasons, but safety ones. “When Lime Punch first came on the scene it was a hard sell. A lot of people might have worn it for accents, but now the consumer acceptance factor is way higher than it has ever been for this shade,” Eiseman said. Rochambeau designers Laurence Chandler and Joshua Cooper seem to be on to the trend, dousing their Sept. 10 show invitations in Lime Punch.

Not wanting to diffuse the aforementioned colors, Pantone created a Spring 2018 Classic Color Palette. While it is not unusual to see navy, gray, sand and white in a spring palette, this grouping presents a separate unit of neutrals that are really core basics, Eiseman said.

Sailor Blue 19-4034
This navy-rooted hue is very comforting and one that helps to solidify the spring palette, she said. “We’re calling this group of 12 genderless, because we see these colors coming to the fore of women’s and men’s,” Eiseman said.

Harbor Mist 14-4202
This midtone dove gray is already important in interiors and from a fashion perspective it solidifies wardrobes. If you’re Gigi Hadid, you try it as a summer lipstick. This foggy gray provides an alternative to year-round basic black, Eiseman said. “In spring and summer, black can get a little heavy. There’s not anything you can’t do with a light neutral gray,” she said.

Warm Sand 15-1214
Lazy seaside weekends are another year away for most workers, but this tawny colors can be a reminder if nothing else. Like gray, sandy neutrals are something that shoppers have invested in again and again. The do-no-wrong basic can also be used to offset any of the spring palette’s more unexpected shades. Kanye West and The Row’s Ashley and Mary-Kate Olsen are among the designers who have counted on this color again and again.

Coconut Milk 11-0608
Coconut Milk is kind of a mainstay of white and off-white. Although Eiseman allowed that white’s popularity last year may have been politically charged, going forward it will be more about “that really clean feeling” that also goes along with diaphanous floaty fabrics. “What’s more diaphanous than white?” she said.