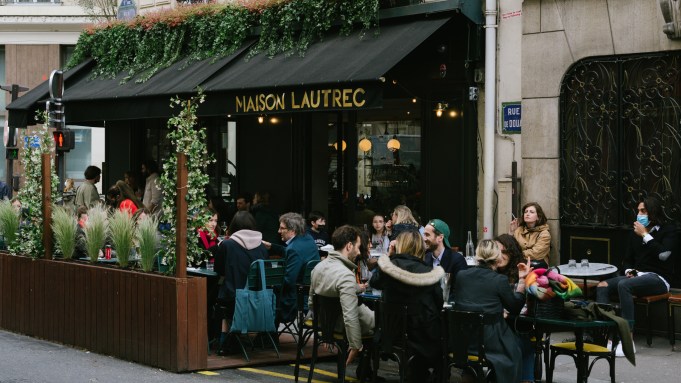 Paris café culture has kicked back into life as lockdowns eased up in France after half a year of closures. The long-anticipated lifting of restrictions on outdoor dining prompted a flood of locals to terraces of bars and restaurants across the city, defying fears that occasional bad weather would dampen spirits.

Undaunted by intermittent rain showers, people turned out in droves, dressing up for the occasion, and donning rain gear. On the first day of reopenings, weather cleared up in the evening, allowing people to take full advantage of the later curfew, which was pushed back from 7 p.m. to 9 p.m. Cultural venues also sprang back to life, and visitors trickled into the city’s famous destinations like the Louvre museum, and new ones as well, with the inauguration of the Pinault Foundation, while the Eiffel Tower won’t reopen until mid-July.

The French capital has proven resilient despite the absence of international visitors, which had grown considerably in the years running up to the pandemic, animating the city and its monuments, serving as key revenue sources for the retail scene — especially the high end. Department stores reopened with fanfare, with executives giving welcoming speeches and salespeople lining up to greet customers.

“The atmosphere was joyful,” observed an official at Galeries Lafayette. “It was really moving,” said a representative of Printemps, noting that the Paris department store’s newly appointed director Laurence Nicolas was on hand, along with chief executive officer Jean-Marc Bellaiche.