Paris Couture: Hot Times and Places to Experience Between Shows

What to see, where to eat and what to do in the City of Light during couture. 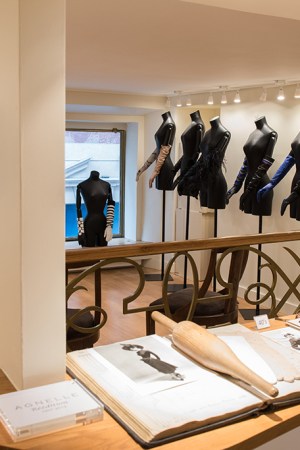 Paris is abuzz — and sweltering. As the couture shows get started on Sunday, the temperatures in the French capital have been hitting unusual heights, inching close to 100 degrees and sending denizens in search of any cool spot they can find. It’s expected to stay hot through the shows, so those heading to Paris should pack the lightest clothes possible — and check out these “cool” new restaurants, spas and shops.

WHITE-GLOVE TREATMENT: French glove maker Agnelle has opened its first store. The 800-square-foot boutique on Rue Duphot, just off the Rue Saint-Honoré, offers the house’s full range of gloves alongside a new line of coordinated gloves and bags, developed with Belgian accessories designer Marie-Laurence Stévigny. The first floor features private salons where customers can select the length, stitching and lining of their gloves from a palette of 48 colors. The tailor-made service is available by appointment, and the store also offers repairs.

THREE’S A CHARM: In less than two months, chef Guy Savoy has opened three new Paris locations. Goût de Brioche is the latest addition to his empire, selling only brioches, the traditional French bun, which is to Savoy what the madeleine was to Proust. “Layered brioche with mushrooms accompanies my artichoke and black truffle soup, a signature dish of my restaurant. It’s the recipe of my apprenticeship,” says Savoy, a self-proclaimed addict of the delicacy. Designed by Jean-Michel Wilmotte, the architect behind all of his restaurants, the new shop on Rue Mazarine sells two salty brioches (with mushrooms or parmigiano reggiano cheese) and three sweet varieties, including candied fruits, praline plus apricot and pistachio.

In June, Savoy opened Etoile Sur Mer, a seafood restaurant in partnership with his 34-year-old protégé Clément Leroy in the former location of his three-Michelin-starred restaurant, which is now in La Monnaie de Paris. Meanwhile, Savoy is heading up the kitchen of Restaurant Guy Savoy La Monnaie de Paris. Since it officially opened on May 19, it’ s one of the hardest gets in town, with chief executives, politicians and celebrities trying to reserve one of the restaurant’s 65 seats. Prices start at 200 euros, or $222 at current exchange, for the à la carte menu. The set menus go for 360 euros and 390 euros, or $400 and $433. “I went from a Golf GTI to a Bentley,” Savoy says.

KICKING HABITS: Rituals Cosmetics just debuted its first outpost in France, in the City of Light. The 666-square-foot location in the Marais district carries the label’s entire product range. The idea behind the brand is to change everyday routines into small rituals. To do so, it connects ancient traditions from around the globe and beauty. Each Ritual universe, such as Hammam, Ayurveda and Ancient Samurai, has products for the bath, body and home.

ART FOR EVERYONE: Paris museums are displaying a wide variety of exhibitions this summer. Praised by some, despised by others and repressed by the police, graffiti art stirs up varied responses. It has finally formed a proper movement, and museums have taken notice — not least Paris’ Pinacothèque, which has put on a show called “Pressionism, The Masterpieces of Graffiti On Canvas.” Meanwhile, the Maison Européenne de la Photographie spotlights a lesser-known element of French photographer Lartigue’s career: his color shots, most of which are on display for the first time. The Musée Bourdelle has reopened after eight months with a comprehensive exhibit about the various roles artists’ models have played from the Renaissance to the 20th century. Built with toys and actual motor vehicles, the works of Chris Burden can seem life-threatening at the Gagosian Gallery on the outskirts of Paris in Le Bourget. His pieces test the limits of sculpture and how manipulating perception and scale can trouble the viewer. Over at the Louis Vuitton Foundation, visitors can explore what makes art history in viewing some iconic pieces like Edvard Munch’s “The Scream” and Henri Matisse’s “The Dance.” The show is divided into four sections, one of which delves into the relationship between artists and music, and another is meant to reflect “Contemplative” art, including meditations on nature. Although he is the most famous Spanish artist of the 17th century, Diego Velázquez has never been the subject of a one-man exhibit in Paris. The Grand Palais is now displaying more than 50 of his works, which include pieces from his early years and examine the artist’s influence on contemporaries. And for those wishing to remain outdoors, Anish Kapoor has poetically peppered the sprawling grounds around the Palace of Versailles with gigantic sculptures. “Descension” involves swirling water, while “Sky Mirror” reflects what’s going on in the atmosphere, for instance.

The Lebanese couturier has taken over the Art Deco corner building near the Four Seasons Hotel, George V that was previously occupied by fine food emporium Hédiard. The 2,600-square-foot store features a new concept by interior design agency RDAI that uses architectural volumes to offset the femininity of the clothes.

The double-height entrance features an antique chandelier, while the floor and walls are clad with crema delicato marble with brass inserts. The creamy color palette is set off by graphic bronze ceiling lights and glass-and-walnut furniture.

At each end of the boutique, two large mirrors engraved with silver and brass ridges house a large video screen.

HOTSPOT:  The red-hot Upper Marais district of Paris, home to an A.P.C., Merci concept store and the new Maison Kitsuné store and café (its largest to date in the French capital), has a new cool resident: Maison Plisson.

The 5,380-square-foot food hall and restaurant is the brainchild of Delphine Plisson, a former deputy managing director at Claudie Pierlot, who also has worked for Agnès b. and Saint Laurent.

When she turned 40, Plisson left her job at Claudie Pierlot to fulfill her dream of creating a new concept that would be an all-in-one market, wine cellar, grocery, bakery, restaurant and takeaway haunt.

“I was inspired by Anglo-Saxon concepts such as Dean & Deluca and Whole Foods Market. I have been waiting for 20 years for these types of concepts to arrive in France before taking the plunge and creating it myself,” Plisson told WWD.

These days Parisians line up for a table in the “Salle à Manger,” which Plisson describes as a “home-away-from-home dining hall.” It seats 120, with the 60 places on the terrace being the hardest gets. No reservations are allowed.

The menu includes a spinach, pea and ricotta tart at 12 euros, or $13 at current exchange; a Caesar salad at 15 euros, or $17, while all desserts, such as the rice pudding and chocolate mousse, go for 7 euros, or $8.