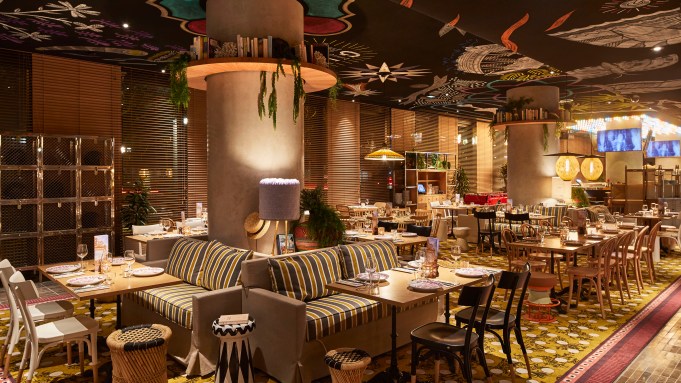 PARIS — While zipping between couture shows, take a break from the fashion flock and check out these new eateries, shops and exhibitions in Paris, including Datsha, Rosie and Canada Goose.

1. One year after making it to the semifinals of French television program “Top Chef,” culinary prodigy Alexia Duchêne has opened her first restaurant, Datsha, at only 24 years old. Located in the Marais, the restaurant has quickly become one of the hottest food spots in Paris. Book the 80 euro tasting menu ahead and prepare to be blown over by Duchêne’s imaginative dishes, such as crumpets topped with monkfish liver or homemade agnolotti.

2. The classic French brasserie has been updated for 2020, and it’s called Rosie. The restaurant, opened earlier this month by Kevin Caradeuc and Juliette Cerdan, both formerly part of the Big Mamma group, serves traditional French food made with products sourced directly from French producers. Head to the 11th arrondissement to sample the brasserie’s classic steak tartar and delicious homemade pastries.

3. Mama Shelter, the chain of hip hotels designed , has just opened in the South of Paris. Located next to the trade show center at the Porte de Versailles in the 15th arrondissement, Mama Shelter Paris West, in addition to its 207 rooms, also houses a spacious restaurant serving dishes created in collaboration with Guy Savoy, as well as a rooftop bar to relax once the day is over.

4. Feeling the chill? Swing by the Canada Goose store — its first in the French capital — stocked with parkas and knitwear. Artwork by Inuit artist Ningiukulu Teevee and Meghan Price decorates the sprawling Rue Saint-Honoré space, an angle-shop in an 18th-century building, covered in European oak parquet with marble slabs from Italy. A cold room simulates arctic conditions.

5. There are just a few days left to visit the not-to-be-missed “Toulouse-Lautrec — Resolutely Modern” exhibition at the Grand Palais. The retrospective, Henri de Toulouse-Lautrec’s first in 30 years in France, offers a new understanding of the artist’s remarkable career, demonstrating how he was more than the Montmartre voyeur he is often depicted as. This show emphasizes the poetic dimension of his work, exploring his links to photographers and examining his realistic approach.

6. After Paris’ Jewish museum last year, it’s the Quai Branly Museum’s turn to feature beauty entrepreneur Helena Rubinstein. Through 65 artifacts drawn from her extensive collection of African and Oceanic art, the revealing exhibition addresses her role as a pioneer in the recognition of the category. It also displays the more unusual pieces that highlight her intuitive eye.

7. Beauty buffs take note: L:A Bruket, the natural and organic beauty brand born in Sweden, has just opened its first boutique in France, in Paris, on Rue Saint-Sulpice in the 6th arrondissement. The 780-square-foot space carries the brand’s entire range, including face, body and hair care, plus home fragrances, kits and sets. The store’s look today is temporary, slated for a change in March.