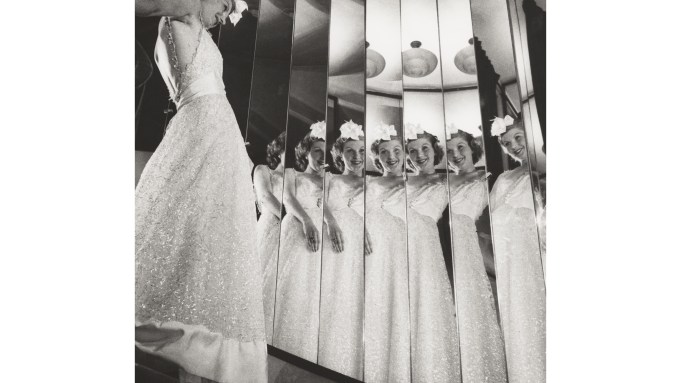 LIKE A HOME: Anna Molinari, founder and designer of Blumarine, said it was time to revamp her little boutique on the grand Avenue Montaigne. “It’s the most beautiful avenue in Paris with so many pretty boutiques that have been redone lately — I wanted to make ours new and elegant,” she said of the venue slated to fete its new design with a cocktail party on March 5.

The 3,200-square-foot unit stretching over two floors is modeled after a Parisian townhouse, boasting chandeliers by French crystal maker Baccarat next to luscious fauteuils and marble tables set against light gray wooden floors. Among the categories stocked are the brand’s ready-to-wear (including a selection of styles from Blugirl, Blumarine’s younger sister), shoes and accessories, jewelry and fragrance as well as pieces from the label’s home goods collection.

As Blumarine strives to modernize, the new retail concept will also be applied to the brand’s Monte Carlo unit, scheduled to reopen in April, Molinari revealed, as well as two new stores in Tokyo and Dalian, China, later this year.

The family owned company runs about 63 boutiques around the world, and while Italy remains its largest market, generating 30 percent of total sales, the brand is also growing in Japan, China and Russia, the designer said. — Paulina Szmydke

THE PAUSE THAT REFRESHES: By the time they get to Paris, most of the fashion flock could use some pampering. For that, there’s Institut Paloma, a recently opened spa in the 8th arrondissement.

Clients’ skin is analyzed before each treatment session with a Babor diagnostic tool, and they are invited to return two weeks later for another reading to gauge progress.

In warmer weather, the sizeable terrace is open to relax and sip detox juice, coffee or tea. — Jennifer Weil

IN THE BAG: Christie’s France is hosting its third Sacs & Accessoires auction on March 5.

The sale will spotlight accessories from houses including Hermès, Chanel, Dior and Louis Vuitton. On offer will be unique pieces, special orders and limited editions with prices ranging from 2,000 to 70,000 euros, or $2,220 to $77,722.

Among the collection is an Hermès Kelly Natura 28 Vert Céladon, made with a traditional process revisited by the house in 2000 that gives a transparent jade hue. Christie’s said it’s believed that there are less than 10 of these bags made with the special technique, making it one of the rarest Kelly bags in the world. Yet with an estimated price tag of 15,000 to 20,000 euros ($16,655 to $22,206), it might seem reasonable, compared to the Birkin 35 that sold for 108,300 euros ($120,247) last season from the same collection.

The auction also includes a limited-edition Hermès Birkin, part of the So Black collection. No longer in production, the extremely rare alligator bag features a black metal trim instead of the model’s usual gold or silver. It is estimated to fetch between 40,000 and 45,000 euros, or $44,390 or $49,939. — Jan Vincent Gonzales

When the actor came to Paris for the climate summit earlier this winter, he posted a selfie on Instagram in PH7 Equilibre, a new vegan eatery on Rue Le Peletier in the Grands Boulevards neighborhood. The caption read: “Found this great little vegan restaurant in Paris called @ph7equilibre based on balance diet. I need to alkalize!! (Well I guess we all do.)”

Opened by Claudia Zémor, who’s 28, and her mother Murielle, PH7 Equilibre follows the principle that an acid-alkaline balance draws locavores (including employees of Michael Kors and Lacoste, whose offices are nearby). The menu includes “L’Essentielle” and “L’Alcalinisante” salads, at 12 euros and 14 euros, or $13 and $15, respectively. “L’Alcalinisante” contains lentils, polenta, chickpeas, carrots and a spinach-and-cheese gratin. (Vegans can trade the gratin for Indian cauliflower.) There’s a combo for an extra 4 euros with a dessert including panna cotta with coconut milk, carrot cake, chocolate mousse or stewed fruits.

Libations include juices, chai latte and kefir, a homemade fermented drink with fruit that keeps the body in the alkaline zone.

Another healthy spot, Wild and the Moon, just opened in the Marais neighborhood on Rue Charlot, next to the Monsieur Lacenaire and Ron Dorff stores. It’s the brainchild of Emma Sawko, who’s already behind the Comptoir 102 concept store in Dubai that stocks labels including Jerome Dreyfuss and Isabel Marant and has a healthy eatery there.

Sawko, who lived in New York, said she was missing juice bars and vegetarian haunts in Dubai and Paris “that are both laid-back and sophisticated.” The 860-square-foot, bright space with plants, seats 35. Its menu includes soup, a choice of salads, such as quinoa, kale and avocado, and dessert. The pear tarte tatin, with no butter or added sugar, is a hit. There’s also a chia pudding with almond milk.

“I don’t believe in detox. I believe in tasty food,” said Sawko, whose dream is to roll out her concept to other locations, making it “the Starbucks of organic food.” In the meantime, Wild and the Moon is the official caterer for Next models this season.

Meanwhile, Angèle Ferreux-Maeght, who is 28, is the great-granddaughter of the late art dealer Aimé Maeght and his wife, Marguerite, has been creating a buzz with La Guinguette d’Angèle, which bills itself as a “detox corner.”

Parisians keep a keen eye on the menu that’s posted every morning on La Guinguette d’Angèle’s Facebook page and line up at its storefront. Take-away options include a salad, soup and a hot dish, including a mix of legumes and cereals, plus vegetables with a pesto sauce and a slice of gluten-free bread from Chambelland bakery. There are also açai bowls, juices and matcha lattes.

Ferreux-Maeght has been catering for the likes of Chopard, Jo Malone, Inès de la Fressange and Dior. — Laure Guilbault

ALL JUICED UP: For a healthy botanical pick-me-up during Paris Fashion Week, try the C’Juice shop, new on the Left Bank, for freshly made cold-pressed juices blending raw fruits and vegetables, enriched with plants.

Founder Claire Courtin-Clarins had a strong belief in the power of plants instilled from a young age by her grandfather Jacques Courtin-Clarins, the founder of Groupe Clarins.

The juices’ ingredients — billed to be chockablock with nutritional value — are chosen by Claire Courtin-Clarins along with ethnobotanist Jean-Pierre Nicolas and nutritionist Sandrine Billaud. The concoctions are said to have cleansing, purifying and regenerating properties.

The juice bar also offers pedagogical information about various ingredients in its drinks, such as sage, aloe vera and nettle.

The ambitious project was the brainchild of Benjamin Patou, a descendant of Jean Patou, who owns Paris’ famous club L’Arc, among other hotspots. He teamed with Acurio and Canadian singer Garou on the new venture. Tony Gomez, a figure of Parisian nightlife, was named general manager.

“Paris is definitely one of the most exciting and inspiring cities,” Acurio told WWD.

About opening on the Avenue next to the Plaza Athénée hotel and luxury boutiques, he said: “It is a huge responsibility because it is the chance of putting our Peruvian culture [among] recognized world brands. It’s a huge opportunity to open a new vision [of] Peruvian experiences.”

Acurio tapped Rubén Escudero, who worked with him in Lima, to head the kitchen.

On the restaurant’s menu are ceviches, such as the Clasico with white fish and sweet potato or the Nikkei with blue fish, avocado, radish, sesame oil and tamarind leche de tigre. There are also anticuchos, Peruvian brochettes and grilled fare, such as black angus with chimichurri sauce and tacu tacu. Desserts include Peruvian chocolate mousse with crunchy quinoa and lucuma ice cream.

There’s a menu at 36 euros, or $40, for lunch and 65 euros ($71) for dinner, excluding drinks, which include variations of the pisco sour cocktail.

CHINA IN PARIS: For the first time in a decade, Chinese contemporary artists are the focus of an exhibition in France. The Fondation Louis Vuitton is showcasing the works of a dozen young artists alongside masterpieces of well-known artists from China, from its permanent collection. Through a wide array of media, they demonstrate the complexity and constant transformation of society in the People’s Republic.

The Far East is also highlighted at the Fondation Cartier, where Japanese photographer Daido Moriyama returned to show his most recent works in color that display Tokyo urban life. There’s also a specially commissioned installation. In the same venue, a Colombian city, Cali, is being examined through the eyes of former photojournalist Fernell Franco. Expressive pictures from 10 series illustrate the mutations of this urban environment.

Elsewhere in Paris museums, the Jeu de Paume is offering one of Portugal’s greatest artists, Helena Almeida, a chance to display how painting and photos can relate on canvas. Her works center around the body and gesture.

Also taking place is the first retrospective in France for photographer François Kollar. It comprises 150 prints, ranging from his contributions to fashion magazines in the Thirties to his delicate pictures of industrial life in the Fifties and Sixties.

Activist painter Gérard Fromanger is the focus of a show at the Centre Pompidou. Grouped by themes, the paintings, drawings, sculptures and a film span the past 50 years and underline his role in France’s May 1968 civil unrest.

The meaning of art history is being questioned at the Grand Palais with a groundbreaking exhibition of 180 works drawn from prestigious museums. From Rembrandt to Annette Messager, it offers an unusual journey through different styles, eras and countries.

Tony Cragg is back with a solo show at the Galerie Thaddaeus Ropac. The self-proclaimed “materialist” has brought 25 new sculptures made of steel, wood, bronze and stone, which he layered, spiraled, swerved and twisted into staggering, emotionally charged formations. The show coincides with the Brit’s solo exhibition at the Hermitage in St. Petersburg. — Anne-Aymone Gheerbrant

STAR SPANGLED: After “Top Chef” judge Jean-François Piège left the Thoumieux restaurant and brasserie to open his “Grand Restaurant” this fall, Thierry Costes, Thoumieux co-owner, tapped Sylvestre Wahid to succeed him. The Pakistani-born chef, who worked at Alain Ducasse at the Essex House in New York and won two Michelin stars at Oustau de Baumanière in Les Baux-de-Provence, in the south of France, has made his mark in Paris. He’s one of the winners of the Michelin Guide’s 2016 edition, having scooped two Michelin “macaroons” for the acclaimed restaurant renamed Sylvestre.

Christian Louboutin and Nicolas Sarkozy are among those who have dined there since he took over. The chef also mans the brasserie, which now offers a “brunch royal” on Sundays for 48 euros, or $53.

Other Michelin Guide winners this year include Le Cinq at the George V hotel, Alain Ducasse at the Plaza Athénée — both newcomers to the three-star league. With two Michelin stars each are Piège’s Le Grand Restaurant and Mathieu Pacaud’s Histoires and La Réserve’s Le Gabriel. — Laure Guilbaut