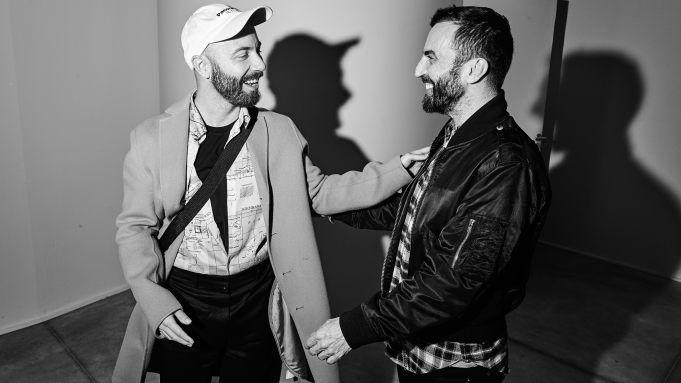 PARIS — With a host of off-calendar exhibitions springing up around town, Paris Photo week drew a fashionable crowd to the four corners of the French capital.

“Azzedine was obsessed with Umm Kulthum since his childhood,” said Carla Sozzani, president of the Azzedine Alaïa Foundation. “Every Thursday night, his grandfather tried to catch Egyptian radio, so it was the first voice he heard, and he was singing all the time in his atelier — working and singing Umm Kulthum.”

Alaïa and Neshat met a few years ago and had dinner in the kitchen of his headquarters in Paris, before watching a video of Kulthum performing at the Olympia in Paris in 1967. “She wanted to ask him to do a dress for the film, but he never did,” Sozzani said.

The videos will be shown next in Alaïa’s home in Sidi Bou Said in his native Tunisia, for an exhibition commemorating the second anniversary of his death. Opening on Nov. 17, the show will also feature black dresses created by six Tunisian designers.

Curator Mehdi Dakhli’s group exhibition “+50” at the gallery space of concept store Merci served as a commemoration of the 50th anniversary of the Stonewall riots, as well as highlighting the threats still faced by the LGBTQ community today.

“I wanted to organize a project to highlight [Stonewall] because I noticed that among my circle of friends in France, the younger ones weren’t really aware of it,” Dakhli explained.

Designers Nicolas Ghesquière, Julien Dossena, Pierre Hardy, Louise Trotter and Bruno Sialelli were among the guests at the opening on Wednesday, checking out works by artists including Carlos Motta, Vittorio Santoro and Raphaël Chatelain.

Chatelain documented the plight of LGBTQ Venezuelan migrants who suffered persecution on their journey to the U.S. A portion of proceeds from the exhibition, and from a series of T-shirts codesigned by Motta, will go toward the nonprofit organization Rainbow Railroad, which helps LGBTQ people escape violence and persecution.

“When you see that in Chechnya, there are concentration camps for homosexuals, you realize that there is a big gap between the celebration of diversity and gender fluidity in the West, and what is happening in countries like that,” Dakhli said.

Yang, who was featured in the BBC’s “100 Women” list in 2018 alongside Chelsea Clinton and Peruvian writer Isabel Allende, regularly shoots for Chinese fashion publications such as Elle, Grazia and the bimonthly Vogue Me magazine, as well as brands like Paris-based shoe label Both.

She hopes to challenge stereotypes of Asian beauty with her gritty, poetic portraits. “I think maybe most foreigners know China from movies or newspapers. They don’t really know the reality of China,” she said. “I’m trying to show Chinese girls who are very free and independent. I show their weaknesses and their strengths. Both sides are real.”

The exhibition included a smattering of images from her new series “Youth,” portraying female and male creative types in China, Hong Kong and Taiwan. “I put a lot of myself in the ‘Girls’ series, but with this new series I’m taking more of a documentary approach,” she noted.

While she acknowledges that attitudes are evolving, Yang has had to fight for her independence. “The traditional culture is hard to change. There is still this idea that women should marry early and get a real job,” she said. “We have to fight against that traditional way of thinking. If we try hard, we can be ourselves.”

Over on the Rue Saint-Claude in the Marais, American photographer Sunny Suits presented “The Life Before Us,” a photography exhibition created in partnership with Japanese street wear brand Perverze as part of its Perverze Photography project, on show until Nov. 14.

Now in its second edition since launching in 2018, the project gave free rein to Suits’ imagination, which is fitting as she describes her photography technique as quite impulsive. “My work has always been very instinctive, quite animal,” said Suits, who hails from California but is now based in Paris. “It either works or it doesn’t.”

Guided by the storyline of Emile Ajar’s “La Vie Devant Soi” novel, which follows a young boy raised by a prostitute in the Pigalle district in Paris, Suits’ photos are either arresting portraits of youth — her 17-year-old godson Lucien in front of a pink New York skyline, the heavy gaze of sisters Yunnan and Lula lounging in a Parisian apartment — or mysterious shots of her close friends, including performer Joey Gabriel, just visible behind a silk curtain draped over her face; artist Nelson Vercher, who styled the models’ hair on set; or fellow photographer Nan Goldin, pictured in a Perverze leather jacket.

“I loved that the clothes have that total Nineties thing, they all look a bit deconstructed,” said Suits of the Perverze silhouettes featured in her pictures, which are also published in the book accompanying the exhibition. She flipped through its pages: “This distressed sweater looks like early Vivienne Westwood, from her punk couture collection. This could be a Jean Colonna dress from the nineties. And this — it’s totally Martine Sitbon.”