Some tastes, shops and scents around the City of Light. 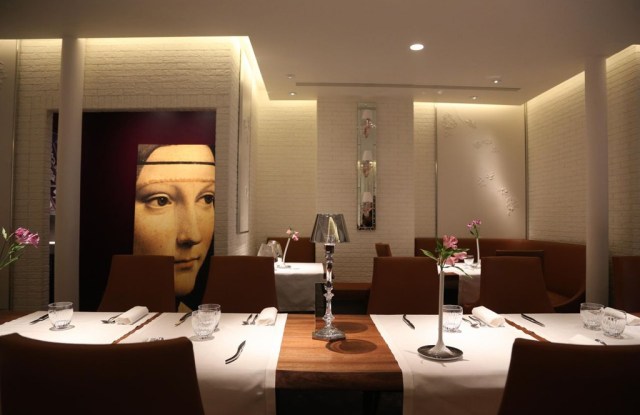 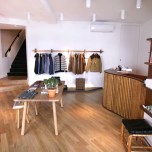 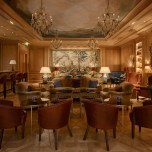 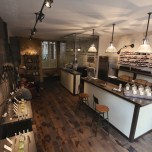 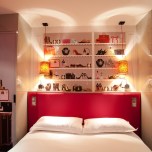 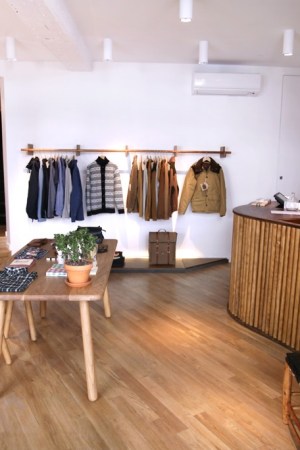 The French Trotters flagship in Paris.

Wondering What to Read Next? A Guide to Summer’s Buzziest New Books

The Duo Who Help the Fashion Industry Land Dream Jobs

Some tastes, shops and scents around the City of Light.

FRAGRANT FEAST: If French cuisine had a couturière, it would be chef Anne-Sophie Pic. The fact that she is the only woman in France to hold three Michelin stars makes the opening of her first Paris restaurant a headline event.

But rather than spin out what she’s doing at her homestead, La Maison Pic in Valence, France, Pic opted for an original new concept, La Dame de Pic, in collaboration with Takasago perfumer Philippe Bousseton. The pair created three fragrances, each representative of a different fixed-price menu. Guests are first presented not with a menu but mouillettes bearing scents called Vanille ambré, Iode et fleur and Sous-bois épicés. The fragrances and menus will change every two months.

Then come dishes with surprising textures, such as the small tomatoes nestled among peaks of vanilla flavored with rum and mozzarella cream, or Gillardeau oysters with cauliflower puree sprinkled with jasmine.

GALLIC FLAIR: Fans of quality basics made in France should head to the new French Trotters flagship in the capital’s hip Marais district. Founders Clarent and Carole Delhouz have grouped their own lines for men, women and children with a multibrand selection of ready-to-wear, home goods and cosmetics brands that reflect their understated aesthetic.

A deceptively small entry provides access to a spacious first floor at the recently opened 2,150-square-foot boutique, which also sells the label’s collaborations with the likes of Avril Gau, Alden and Commune de Paris.

“We wanted to create a cozy space for a nightcap, combining an English club with the spirit of joie de vivre,” said Oetker. “Being able to create different ambiances was important, especially with lighting — but we’re not a disco, so it’s all very flattering.”

Anchored by an authentic 1740 Aubusson tapestry of a Chinese garden, the bar picks up on a peacock motif with a trompe l’oeil entry by artist Thierry Bruet, a stuffed peacock and a palette of neutrals with shots of teal or leopard pattern.

Behind the bar, head barman Maxime Hoerth and first barman Roman Devaux (formerly second to Colin Field at the Hemingway Bar) shake up variations on classics, such as the Bristol Old Fashioned No. 1 (bourbon, whiskey, coffee and maple syrup) or the Heartbreaker (vodka, vermouth and rosemary). Tapas, such as King crab maki, shrimp tempura and pata negra ham, by three-star chef Eric Fréchon, round out the menu.

Keeping the vibe current is a rotating roster of DJs and featured video artists whose films loop on a mirror-screen over the bar.

PERFUME OUTPOST: Le Labo recently opened its first freestanding store in France, on Paris’ Left Bank. The boutique is home to the fragrance brand’s entire collection — including personal and home scents — plus Vanille 44, a creation made especially for the outpost. (Vanilla was chosen as the note best representative of French perfumery.)

The 444-square-foot Le Labo shop has an artisanal feel, with wooden floors and some rough-hewn walls. A glassed-in section toward the back is where the fragrances are concocted on the spot for clients.

SIN CITY: Having dreamt up the occasional hotel suite (notably Le Cabaret at Le Pradey hotel), lingerie maven Chantal Thomass has set her sights higher. Her latest project is an entire hotel designed along the theme of the seven deadly sins.

Of the three-star Vice Versa — the latest boutique hotel opening from the Compagnie Hôtelière de Bagatelle — Thomass said, “There was the ground floor, plus six. Once I started thinking of seven, the theme of one vice per floor just came to me.”

She admitted to a particular fondness for “Lust,” featuring pink-and-black rooms with lashings of lace, as well as “Envy,” where guests will find luxury accessories, jewelry and fragrances worked into the decor in trompe l’oeil.

“It’s about all the pretty Parisian things fashion lovers dream of,” noted Thomass, who threw in Heaven (a pristine white lobby with wide sofas in quilted leather) and Hell (the basement hammam) for good measure.

NEXT: The Art of Fashion >>

THE ART OF FASHION: The Musée d’Orsay is holding its own fashion show this season with the new exhibition “Impressionism and Fashion.”

Featuring 60 paintings by Manet, Monet and other emblematic artists of the movement — many of which have not been displayed in Paris for years — the show explores their aesthetic approach and how they brought garments to life by depicting their textile’s drape and texture through the rendering of light and color.

Adding an extra dimension are the 50 dresses, accessories and 20 men’s wear pieces that are also on display, which come from the Musée Galliera and French private collectors’ collections. So, too, are classical portraits by society painters such as Tissot and Stevens that help give a comprehensive perspective on fashion at the end of the 19th century.

Galliera is also linked to the Palais de Tokyo’s piece called “The Impossible Wardrobe,” in which Tilda Swinton will perform as part of the Paris Autumn Festival. In the live happening, which is the brainchild of Galliera director Olivier Saillard, the Scottish actress is to parade the precious garments from the storerooms of fashion museum for 50 minutes. Simultaneously, Katerina Jebb’s short movie made during the rehearsals for the performance will be screened in a loop. In the film, Swinton moves through Galliera’s storerooms holding historic archived garments.

Another artist drew from the archives of fashion, and not just any archives — Chanel’s. For her first exhibition at the Gagosian Gallery in Paris, Cindy Sherman assembled some signature self-portrait photographs with landscape images she retouched to create a painted-canvas effect. The monumental pieces emphasize the contrast between the luxurious clothing Sherman wears (ranging from early creations by Coco Chanel to more recent ones by Karl Lagerfeld) and the enigmatic, mysterious backgrounds.

Then two shows are all about glamour. On the outskirts of Paris, La Vallée Village, the luxury outlet mall in Serris, hosts a collection of 23 photographs by Norman Parkinson from the Fifties to the Seventies. These iconic images, rarely shown in France, illustrate the recurrent themes of elegance and travel together with a quintessential aspect of his art — his love of photographing models outside.

Back in the City of Light, “Paris vu par Hollywood” (or “Paris Seen by Hollywood”) brings together 400 documents at the Hôtel de Ville, including sketches, posters, dresses and 70 film extracts. From “Intolerance” to “Midnight in Paris,” the exhibition takes a broad historical view of France’s capital as the most represented foreign city in American films.

Meanwhile, the Grand Palais is home to many exhibitions this fashion season, including “Bohemias,” featuring more than 200 works addressing the modern myth of the marginal artist. Spanning four centuries, it examines some 15 themes through a mix of paintings, essays, pictures and musical extracts. The visitor becomes the lost gypsy, starting in Central Europe, wandering through time and ending his journey in a Montmartre café.

At the Musée du Quai Branly is “Beloved Hair,” a survey of the various meanings hair can have in different civilizations and an examination of its specific power, through examples of fashionable hairstyles and hair ornaments.

Then, over at the Louvre, 23 years after I.M. Pei’s Pyramid made its debut, the museum is unveiling its newest architectural achievement. Its Cour Visconti, open to the public for the first time, is the new home of the revamped Islamic Art department. Over 32,000 square feet and two floors of the glass pavilion, 2,500 artifacts will be displayed and protected by an iridescent steel roof that floats like a golden cloud.

DIFFERENT CLASS: Isabel Marant is branching out. Famous for her bohemian chic aesthetic, the French designer has opened a fourth Paris store in the tony 16th arrondissement.

Located in a classic “hôtel particulier,” the 2,500-square-foot store is split into three levels and houses the main Isabel Marant collection alongside the secondary line Etoile and accessories. The space was designed by Alphonse Sarthout of French architecture firm Ciguë and features an entrance installation made from aluminum plates by Arnold Goron, as well as a Japanese-style garden out front.

DOWNTOWN HUNTING: Historic French firearms maker Fauré Le Page, under new ownership and reinvented as a hunting-inspired leather goods brand, has opened its one and only point of sale at 21 Rue Cambon. Both the flagship, with its light oak paneling and brushed steel fittings, and the collection itself update the house’s traditional codes, leaving no possible doubt about its illustrious past. The firm, founded in 1717, made ceremonial weapons for historical figures including Napoleon Bonaparte, and is widely referenced in 19th-century literature.

An armored breastplate and gauntlet, as well as a giant plaque featuring a series of military medals, are displayed alongside the collection of bags, accessories and hunting and shooting equipment. Many of these are decorated with the brand’s scale-motif canvas, designed to reciprocate the traditional shape of armor, while others are declined in revolver-shaped leather pouches and bullet-inspired evening clutches.

BLACK BEAUTY: French leather goods brand Lancaster has opened its first Paris flagship as part of its ongoing efforts to reposition the line at the luxury end of the market.

Conceived by industrial designer Ora-Ito, the 860-square-foot, two-story boutique features a striking all-black design with ridged acrylic walls inspired by terraced rice fields. To mark the occasion, Swedish model Elsa Hosk, who has been the face of the brand for the last three seasons, has designed a suede shoulder bag available exclusively at the Paris store and online at lancaster.fr.

WORKOUT SESSION: For those who want to hit the gym during Paris Fashion Week, HealthCity’s newest location opened in the French capital in early July. The sprawling, 22,222-square-foot space accessible off the Avenue des Champs-Elysées, is brimming with machines — there are about 50 in the cardio-training section alone. Upstairs is an area for cycling classes, while the ground floor includes a section for other courses, such as stretching, yoga, body pump and Zumba.

Here, the intention of its founders — brothers Kevin and Michael Hiridjee and Gael Moreau — was to mix lingerie and poetry and as such, there’s a wall full of books curated by Tschann, the Montparnasse-based bookseller.

Also in line with the literary bent, the boutique is to host book signings and literary conferences. Next up for Insensée: in December it will inaugurate a corner in Galeries Lafayette department store.

From Sept. 26 to Oct. 2, chefs from the vegetarian eatery on Manhattan’s Orchard Street will serve up some of Fat Radish’s signature dishes. Cucumber soup, chanterelle mushroom ceviche, braised spelt grain with kale pesto and a goat-cheese cake with poached plums and basil paired with wine chosen by Juan Sanchez, owner of La Dernière Goutte, all appear on the five-course tasting menu that’s priced at 85 euros, ($111.50). Guests may also sample beer from Mimi’s Beer, a fashion shop on Paris’ Rue de Bretagne that brews its own organic ale.

Former fashion executives Jenna Capano and Tara Gilson are behind the Fat Radish project. They plan to host a pop-up restaurant every month in either Paris or New York.

So what will they bring back to New York City? Said Capano: “I can say that we are huge fans of Parisian restaurants Roseval, Le Galopin and Le Dauphin.”

The Fat Radish at Bob’s Kitchen
74 Rue des Gravilliers, 75003
Open Sept. 26 to Oct. 2, with seatings at 7:30 p.m. and 10 p.m.
Reservations are required: reservations@thesportingprojects.com.