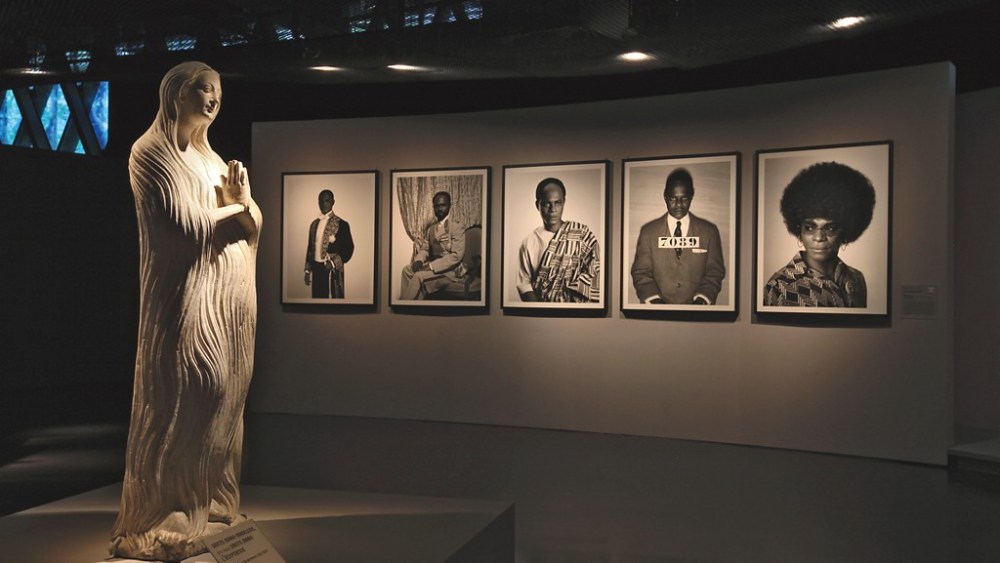 Rapunzel has nothing on Paris’ Quai Branly museum. “Cheveux Chéris, Frivolités et Trophées” (or “Beloved Hair, Trifles and Trophies,” in English), which currently snakes through a long series of rooms at the Paris institution, is made up of about 250 sculptures, paintings, photographs, videos and ethnographic pieces, including everything from undulating manes as shown in a sculpture by Denys Puech to a shrunken head from Ecuador with frazzled locks still anchored as securely as blonde strands to a Barbie.

While some of the sprawling show, which was curated by Yves Le Fur, has a serious, academic slant, it dazzles in the myriad depictions and meanings associated with what grows out of our heads — or doesn’t, as a sizable section on hair loss attests.

“Hair is really kind of an image of the scope of human life,” explained Hélène Fulgence, the museum’s director of exhibitions.

The show, which runs through July 14, begins with familiar themes, such as the stereotypes linked with specific hair colors. Photos by Sam Levin of illustrious blonds and brunettes, such as Brigitte Bardot and Josephine Baker, and paintings by the likes of Jean-Auguste-Dominique Ingres and Jean-Jacques Henner were chosen for their play on long-standing clichés. A Sixties photograph by Neal Barr of “The Bouffant Belles” at a start of a race depicts three concentrated runners each with a towering coif of a different hue.

The mind boggles at the wide range of hairstyles that have been used to seduce. Curls, buns, braids — each has had its heyday in various times and places. Yet every particular look can also take on a stunningly different meaning in a diverse context. Long hair may have been the coif of choice for hippies, but in another era, it flowed from kings. Priests or skinheads alike can be bald, while a photograph by Robert Capa from Chartres, France, in 1944, shows a woman whose shaven head was retribution for having had a German’s child.

Central to the exhibit on hair is the area on its loss, which can result for a wide variety of reasons, including the entering of a religious order, illness or the aging process. Hanging from one wall are three blonde ringlets shorn but still perfectly attached together with a silky ribbon. The curls date back more than 200 years.

Things get hairy again — and wildly exotic — when the exhibit plunges into cultures outside of Europe for its most remarkable section. Called “The Power of Hair,” it comprises about 100 pieces primarily from Branly’s permanent collection and emanating from Oceania, Asia, Africa and America.

Hair as ornamentation is exemplified by pieces made with human tresses — like a necklace from Polynesia and a chest decoration from Ecuador. Such items were considered to have power when they were made with hair from important figures. A series of shriveled Tsantsa heads, also from Ecuador, are displayed, with their mouths sewn shut to keep dangerous words from escaping. Believed to be spirit-imbued, as well, were New Caledonian priests’ masks with large masses of hair.

“[The hair is] supposed to be like a kind of vortex directly connected to the spirit of the dead ancestors,” said Fulgence.

At the exhibit’s exit, two mummies stand sentinel. One, a head from Egypt, has its tightly curled locks intact, while the Peruvian royal mummy is clothed in traditional garb, with hair flowing from a headdress.

“It’s the idea that your hair never dies,” said Fulgence. “It’s one of the [explanations] of its power.”