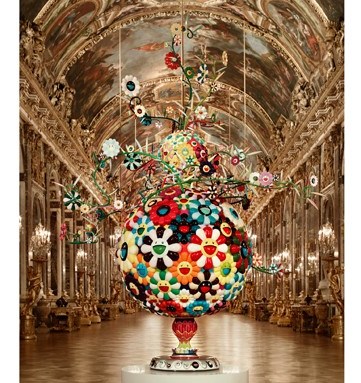 ART WATCH: A plethora of modern art exhibitions are scaling the walls of Paris’ museums and galleries this season.

Maison Européenne de la Photographie plays host to Karl Lagerfeld’s “Parcours de Travail” show. It is among the most comprehensive collections of his photographic work to date and comprises subjects ranging from Chanel advertising to Parisian architecture.

On Oct. 4, Espace Culturel Louis Vuitton will open its 13th exhibition, entitled “Who are you, Peter?” Thirteen contemporary artists — including Melanie Hennessy and Jiji — were asked to explore an aspect of the Peter Pan myth. The ultimate childhood fable brings to light themes as diverse as education, love and the enduring power of dreams.

“Murakami Versailles,” a show featuring the Pop Artist’s work, has taken residence at the vast palace formerly home to Louis XIV. Catch the artist’s kaleidoscopic array of works in the stately rooms, Hall of Mirrors and outside gardens.

Arman, among the founding fathers of New Realism, has a self-named retrospective on at the Pompidou Center. On display there are more than 150 pieces by the artist, who used found objects for his works, which date from the Fifties through his death in 2005.

Pieces by Jennifer Allora and Guillermo Calzadilla are being exhibited for the third time at the Galerie Chantal Crousel. Themes referenced there include environmental disasters, such as the oil spill in the Gulf of Mexico and post-Katrina New Orleans.

Starting Oct. 8, “Kids” movie director Larry Clark, who’s been a prolific photographer for more than 50 years, will hold his first French retrospective, “Kiss the Past,” at the Musée d’Art Moderne. On show will be grainy black-and-white shots from the Sixties through today with an emphasis on Generation X and today’s youth.

LITTLE ’N’ LARGE: Recently revamped by French interior design duo Gilles & Boissier, the sumptuous Mini Palais restaurant just reopened in the Grand Palais museum. Seating 120, it is located across from the Alexandre III bridge and is in the heart of the golden triangle. Its artist atelier feel comes from wooden floors, large pieces of fabrics hanging on a back wall and shelves displaying sculptures. Mini Palais’ menu is signed by three-star chef Eric Frechon and includes starters like a cold cucumber soup or squid cooked with garlic and hot red pepper. Dishes include fresh cod served in a coriander and lemon grass broth or foie gras and duck burger. A large selection of desserts — like giant rum baba, thin fig tart with almond ice cream and green apple salad with raspberries and fresh herbs — is available. Mini Palais also features a large and elegant terrace, which seats 100. Dinner for two without wine costs around 100 euros, or $134.10 at current exchange.

SILVER SCREEN: A glam way to spend an evening in Paris this season is to invite friends to watch a favorite movie in a private club setting. Le Germain Paradisio movie theater, with 25 seats, is located below the trendy Café Germain and can be rented out for private screenings of movie classics, 3-D projections or installations. The space was designed by India Madhavi, who also decorated the Germain restaurant.

Vanessa Bruno recently hired out the venue for the screening of her spring-summer 2011 advertising film campaign that features Lou Doillon.

The space rents for 2,600 euros, or about $3,500 at current exchange, for an evening including dinner but not drinks.

HOTEL HAPPENING: Opened last summer, The Burgundy hotel is situated off the Rue Saint-Honoré, near the Tuileries gardens.

The five-star hotel is contemporary and refined with lots of artwork on display.

Its 51 rooms and eight suites are bright and large, with some featuring large terraces.

The Burgundy boasts a restaurant and bar with a large selection of cognac and Champagne as well as a swimming pool and spa.

ABOUT TIME: Officine Panerai has quietly opened its first Paris boutique, on the Right Bank. Like its other locations, this diminutive 441-square-foot space is done in teak and steel with display cases set into an undulating wall and two desks where clients may try the complete range of watches — from the entry-level Base Logo (at 2,900 euros, or $3,877 at current exchange) to the new arrival Radiomir Egiziano, a 60-millimeter model in a steel-ceramic composite (at 19,900 euros, or $26,600). There are also special items, such as the skeleton tourbillon, set to arrive in early 2011 (112,000 euros, or $149,718), and exclusive models may join the mix, too, a spokeswoman said. Here, as in other Panerai boutiques, new watches appear about a month before they are distributed elsewhere internationally. Further openings include stores in Hong Kong and Shanghai by yearend, bringing the number of dedicated boutiques to 20.

SPRINGING UP: Daniel Rose’s much-awaited new Spring restaurant finally opened in August. The two-story eatery can seat 40 and has an open kitchen on the ground floor plus a bar and a wine cellar on its lower level.

A visit to the American, self-taught chef’s restaurant is always full of surprises, as the daily menu is up to Rose’s mood and what’s available at the market.

One day, a starter might be a delicate zucchini flower stuffed with trout and shrimp served with a marinade of chanterelles and lettuce emulsion and a main dish could be duckling in lobster broth with porcini mushrooms. The next day, however, on offer might be fried and raw oysters with pineapple jelly followed by poached veal and grilled red snapper served in chicken broth with crystallized potatoes, artichokes and leaks. The menu includes pairings of two desserts. These could comprise blueberries in a peach and verbena sauce followed by a chocolate sherbet with salted butter caramel or thyme sherbet topped with anise meringue and then a sweet lemon cream.

EATING BY NUMERS: Le 104, the cultural center opened two years ago that offers residences and ateliers for contemporary artists and has hosted fashion shows, now harbors its own eponymous restaurant. French chef Fabrice Biasolo – known for his convivial cuisine – heads the 160-seat eatery. At 104, he favors fusion food and street fare, such as pork filet stuffed with shrimp in coriander broth and a steamed banana. The lunch menu costs 17 euros, or $22.80 at current exchange, and dinner goes for 28 euros, or $37.60.

IT’S A BALL: Le Bal, a new exhibition space in Paris, has recently opened with the exhibition “Anonymes,” which includes works by photographers Jeff Wall, Walker Evans and Chauncey Hare.

Under the patronage of the former director of the Magnum Photo agency, Le Bal will put up four shows per year that host artists across disciplines such as photography and the audio-visual arts.

It’s also being touted as a venue for up-and-coming designers. Situated in a cobbled passageway near the Place de Clichy, Le Bal has a contemporary bookshop and a café, which is open Wednesday through Sunday, from 10 a.m. to 11 p.m. It specializes in British fare, including scotch eggs and Niel’s Yard cheese.

WINE LIBRARY: Paris’ Galeries Lafayette recently opened on its third floor what’s billed to be the largest Bordeaux cellar in the world.

Crus from the likes of Ausone, Cheval-Blanc, Haut-Brion or Lafite-Rothschild are represented as is a large selection of more accessible wines. Magnums and jeroboams are on offer, as well.

BLUE CANVAS: A great-fitting pair of jeans may be considered a work of art, but at Galerie Canesso denim is raised to the level of masterpiece.  The Right Bank art gallery is exhibiting select works by “The Master of the Blue Jeans,” an anonymous 17th-century Italian artist known for painting peasants in their work clothing made from cotton twill from Genoa (or Gênes in French, the origin of the word “jeans”).  To mark the occasion, French design duo Marithé et François Girbaud have unveiled a denim jacket printed with one of the works of the Italian artist. The exhibit runs until Nov. 6.

CHILD’S PLAY:  Out to snap up its share of the back-to-school market, Lacoste recently opened its first children’s store in Paris, on the Left Bank. On offer at Lacoste Kids is ready-to-wear, accessories and – of course – colorful T-shirts with playful takes on the label’s crocodile logo, including limited-edition designs by local illustrator Severin Millet. Prices start from 30 euros, or $38 at current exchange.

MABILLE GOES CASUAL: Alexis Mabille this season will focus on his more commercial side, with his first women’s ready-to-wear-focused show. The event is to be held at the Pavillon Alexandre III on Oct. 3. Mabille said the idea was to create a wardrobe of casual day-to-night pieces, ranging from jeans and cotton shirts to cocktail frocks, albeit in easy cuts and fabrics, such as jersey and linen blends. “It’s more realistic but still in my image, with a fun couture allure,” said Mabille, who has also used a Raoul Dufy print from silk mill Bianchini-Férier’s archives in the collection. Prices start at around 300 euros, or $402.15 at current exchange. Mabille will also send out a few special looks at the end of his show, including an embroidered bolero jacket.