Things to see, places to stay — and a big good-bye in the City of Light. 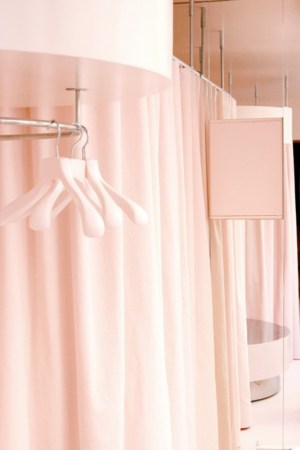 Things to see, places to stay — and a big good-bye in the City of Light.

The 650-square-foot Right Bank space will act as a laboratory for collaborations between founders Pascal Humbert and Cat Traoré and fellow designers, artists, musicians and other creative types.

RELATED STORY: Paris Preview: In With the New >>

The sugar-almond pink store will be inaugurated on March 3 with the presentation of a capsule collection including a shirtdress, fringed gloves, a silk scarf and a man’s jacket, each available in a limited edition of 15.

By way of an invite, Nouvelle Affaire is sending out a vinyl recording of “Lick Me,” a track recorded for the occasion by hip band The Two. — Joelle Diderich

Hand-colored photographs by Egyptian artist Youssef Nabil are in focus at the La Maison Européenne de la Photographie. Nabil chose 60 shots — including those of silver-screen icons Catherine Deneuve and Charlotte Rampling and contemporary artist Marina Abramovic — all unique renderings of people and places with iridescent colors blended into the black-and-white prints. Inspiration for the show, which runs until March 25, was gleaned from Egypt’s golden age of cinema.

Also getting up-close and personal at the photography center is Dominique Issermann, with her 33 photographs of model Laetitia Casta that were taken over a three-day period at Switzerland’s Therme Vals.  That exhibition is also on until March 25.

Lighting up La Maison Rouge is “Néon, Who is Afraid of Red, Yellow and Blue?”, which explores the work of Neon Art Form pioneers between 1940 and today. Pieces include Carlos Cruz-Diez’s “Chromosaturation” and Sylvie Fleury’s “High Heels on the Moon.” Other artists featured in the exhibit ending May 20 include Bruce Nauman, Dan Flavin and Jeff Koons. The show also investigates how neon is produced and how it oscillates between function and art.

La Pinacothèque de Paris is holding a show of German Expressionists, titled “Expressionismus & Expressionismi,” and juxtaposes work from the Brücke (“The Bridge”) movement founded in 1905 by Emil Nolde with that of the Der Blaue Reiter (“The Blue Rider”) movement, spearheaded by Wassily Kandinsky and Franz Marc in 1911. The exhibition runs until March 11.

Finally, the Musée Rodin is featuring more than 300 drawings by Auguste Rodin. The sketches, which are on display through April 1, chart his life and work — including the creative process leading up to Rodin’s celebrated bronzes —during the artist’s final 30 years. — Natasha Montrose

With the Feb. 29 opening of W Paris-Opéra, the W hotel franchise (a part of Starwood Hotels and Resorts) is importing its New York brand of fashion-and-music-fueled hospitality to the City of Light.

Located opposite the eastern flank of the Opera Garnier, this 19th-century bank-turned-hotel was revamped top-to-bottom by the Rockwell Group. The design story centers on a backlit digital wall called “The Spark,” which undulates throughout from the living room-lobby to bar, restaurant and beyond. The idea is “to energize the space with varying lighting tempos in function of time, season, moods and events,” said Diego Gronda, managing and creative director of Rockwell Group Europe.

The hotel also plans to work with local artists and emerging fashion talents to showcase what’s new and next. First up: a collaboration with Plexiglas jewelry stylist Yazbukey and fashion week showrooms for new labels On Behalf of Playjobs, Lara Bohinc, Body Editions and Each X Other.

Considering the different DJ sets programmed nightly, a new restaurant specializing in sharing menus by two-star Spanish chef Sergi Arola and a handful of unconfirmed after parties, it’s a fair bet that sleep does not top the list for everyone at the W. That said, half of the hotel’s 91 bedrooms overlook the opera house, and two “Extreme Wow” suites feature edgy design details, such as circular sectional beds with integrated TVs, DJ systems and even a bar. The hotel’s signature cocktail — a vodka-based concoction with Champagne, orange, raspberry, saffron and honey — is also called “The Spark,” but bar master Ardina Kievits also slings a mean tea. Her “euphorique cockteal” blends spirits and tea-style infusions, such as Earl Grey and Cointreau. — Tina Isaac

Tucked behind an unmarked gray facade on a street packed with handbag wholesalers, the new Jules & Jim boutique hotel riffs on the destination concept at a fraction of the prices of multistarred lodgings.

Part art gallery, part lounge, the 23-room hotel clusters around a private cobblestone courtyard with an outdoor fireplace, vertical garden, all-weather sofas and an atelier bar that serves brunch by day and has a resident barman at night (until 11 p.m.).

Rooms are cozy and well laid out, decorated in shades of mocha and white with nymphs-amid-the-rubble fashion shots taken during renovations. Cool design details include retro-lit Hi-Mac panels that convert beds into cocoons (in the streetside building).

Jules & Jim also has a convenient deal with the sleek gym Klay that’s a five-minute walk away. Rooms start at 180 euros, or $237 at current exchange, per night. — T.I.

The Ritz Paris may not be closing until the end of July, but this is the last fashion week one will be able to visit the hotel’s legendary Hemingway Bar, which will pour its final drink (in this incarnation anyway) on April 22. Head barman Colin Field will also be mostly MIA during fashion week, as he is scheduled to be in New York for private events hosted by Ritz owner Mohammed al-Fayed.

When asked about his plans during renovations, Field was elusive, noting he had so many propositions for sideline projects that it was going to take some time to winnow down the possibilities.

“I’m going to be like President Sarkozy,” he quipped. “I won’t announce anything until the very last minute.” — T.I.