Paris is percolating with new shops, restaurants and exhibitions. Here’s a smattering of such off-calendar activities for this couture season.

By Joelle Diderich and Jennifer Weil and Anne-Aymone Gheerbrant and Laure Guilbault on July 1, 2016
View Slideshow 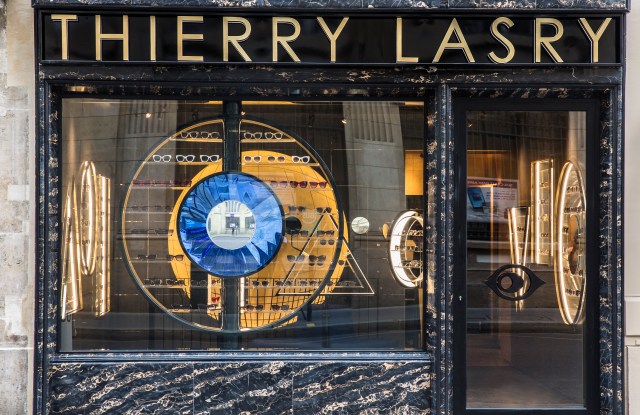 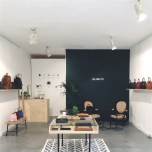 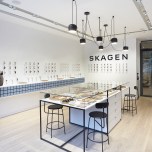 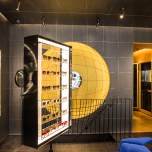 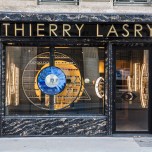 LOOK SHARP: Thierry Lasry’s first store, designed by Vincent Darré, features a host of Surrealist details — including a window display in the shape of a large blue eye. The boutique carries Lasry’s full range of eyewear, including his capsule collection for Fendi and his recent collaboration with tattoo artist Dr. Woo.

French online leather goods brand Léo et Violette is marking its third anniversary with a pop-up store in the Marais district. Launched by Léo Dominguez and Violette Polchi via a Kickstarter campaign, the brand offers men’s, women’s and unisex collections made by luxury artisans in Italy.

For its first store in France, Skagen has opened a 750-square-foot unit on the Avenue des Champs-Elysées. True to its minimalist Scandinavian style, the boutique blends natural materials like wood with screening systems that allow customers to view behind-the-scenes videos, art installations and product shots. — Joelle Diderich

OBSERVATION DECK: These days, the fashion crowd flocks to Loulou, the new restaurant in the museum Les Arts Décoratifs. Bella Hadid, Riccardo Tisci, Caroline Scheufele, Fawaz Gruosi, Vincent Darré and India Mahdavi are among those who have already been spotted there.

In the former space of Le Saut du Loup restaurant, the new two-level eatery with a view over the Tuileries Garden, the Louvre Pyramid and the Eiffel Tower features Riviera fare, such as risotto with white asparagus, pizza and a bowl of Sicilian green beans with pistachio.

The 3,765-square-foot restaurant seats 130 inside. The most in-demand tables are upstairs, where architect Joseph Dirand created the space to reflect the 18th century’s decorative arts period with a French Art Deco twist. Additionally, there’s a chic sprawling garden terrace that just opened and seats up to 200.

The boutique, which once was a mythic Parisian address, closed in January 2015 after Gaultier shuttered his women’s and men’s rtw lines. Cut to today, and the 4,300-square-foot, two-level space has become a trattoria serving up burrata con pesto, linguine alla carbonara, bucatini alle vongole and bottarga, and a range of pizzas priced from 11 euros to 18 euros, or $12 to $20 at current exchange. For dessert, there’s a gelato with hazelnuts from Italy’s Piedmont region, a tiramisu and panna cotta with apricot sauce.

Regulars of the former store might feel disoriented: Its monumental staircase is now gone, windows looking over the interior of the covered passageway Galerie Vivienne were added, as were suspended balconies.

Open daily, it seats 170, plus 20 at the Danico bar that’s headed by renowned bartender Nicolas de Soto. The staff wears sailor stripes in a nod to Gaultier (who didn’t design them; they’re from Saint James). — Laure Guilbault

The label’s first boutique, a 1,110-square-foot space on Paris’ Right Bank, opens into an area where people can test the brand’s 10 perfumes. Each feng shui element is represented olfactively here with a yin and yang version conceived by Guillaume Flavigny. As a brief, the Givaudan perfumer was given poetic philosophical images by a Feng Shui master.

The scents are wide-ranging: Velvet Fire, for instance, has aromatic and woody notes, while Guiding Water includes notes of musk, lily, jasmine, marine and pink peppercorn.

Staff can help guide people to the perfume most suitable for them. Tables are set up in the back room, where consultations take place about fragrance preferences and the feng shui elements. People can on iPads also fill out a questionnaire related to bazi — which can be accessed remotely, as well — to help fine-tune fragrance suggestions even further.

Alnoor created the boutique’s streamlined decor using all the elements. Fire is represented by the Murano chandelier and earth by malachite used in the fountains.

Also on display are some of the raw materials used in the perfumes and bottles of perfume used for refilling flacons.

Less than a month after its February opening, The Harmonist opened a boutique in Los Angeles on Melrose Place. — Jennifer Weil

WESTWARD HO: It looks like the quiet 16th arrondissement is becoming a hipper neighborhood for food, thanks to a flurry of hot eateries popping up in this otherwise residential district of western Paris.

These include the Holiday Café. The American travel magazine Holiday, which has a fashiony vibe, opened a café there, seating 17 inside and 13 outside. The eatery, which serves breakfast, lunch, apéritifs and dinner, is backed by the publication’s artistic director Franck Durand, who, with fashion journalist Marc Beaugé, in 2014 launched the revival of Holiday (that comes out twice yearly).

French dishes include the “croque-demoiselle,” a twist on the traditional croque-monsieur, with quail’s egg served with a fine herb salad; foie gras, and a mix of charcuterie. For dessert, there’s chocolate cake and apple compote, among other delicacies.

Meanwhile, Mamo has also landed in the 16th arrondissement, on Rue La Pérouse. It’s a spinoff of Michelangelo, the Antibes, France-based eatery that during the Cannes Film Festival lures the likes of Kendall Jenner and Leonardo DiCaprio, and which last year opened another branch in New York’s SoHo. The new Paris eatery seats 50 indoors and 18 on the terrace.

And Le Bon Marché plans to open a branch of its luxury food temple La Grande d’Epicerie de Paris in the 16th toward the end of next year. That will be located in what’s now the Franck et Fils department store. — Laure Guilbault

STATE OF THE ART: Jack Kerouac and his rebel peers’ works, including the 120-foot scroll draft of his iconic novel “On the Road,” are on display at the Pompidou Center, illustrating one of the most important cultural movements of the 20th century. Through a wide array of media, the influence of the Beat Generation — from New York to Paris, San Francisco and Tangier — is examined exhaustively.

In the rooms next door, Paul Klee’s career is on view with the first major retrospective of the Swiss artist in more than 45 years in France. The ironic side of his creation is highlighted along with his relationship with other painters like Pablo Picasso. On the lower floor of the museum, eight decades of black-and-white pictures featuring New York and Paris by the American photographer Louis Stettner — who’s 93 years old and still snapping — are being showcased.

The latter is another artist’s focal point at Versailles, where Olafur Eliasson experiments with waterfalls and mist in the palace’s gardens and plays with mirrors in the building to conceive new realities shaking up visitors’ perceptions.

Viewers at the Jeu de Paume get an interactive experience, as well. Through installations of poetic works, which raise questions about representation in modern societies like Beirut, Lebanese artists and filmmakers Joana Hadjithomas and Khalil Joreige invite people to participate in their creations.

Words collide with art at the Gagosian Gallery, where an exhibition focuses on language as an object. From Jean-Michel Basquiat to Damien Hirst, the use of the written word is emphasized on canvas and in other media like television.

Another gallery, Azzedine Alaïa’s, offers the opportunity to discover Christoph von Weyhe’s gouaches, which illustrate the silence of nighttime at the harbor in Hamburg, Germany. Most of the works here have never been shown publicly before. — Anne-Aymone Gheerbrant

MAKING A SPLASH: More novelty is coming from Les Bains, the celebrated Paris nightclub that reopened last year and was the scene of Balmain’s after party during the recent men’s ready-to-wear season.

For instance, Les Bains’ chic brasserie on the ground floor with an adjacent patio now has a new menu. Its consulting chef Philippe Labbé, who was recently tapped to oversee the kitchen of La Tour d’Argent, has concocted such dishes as fennel purée, apple, watermelon, cucumber and carrots; risotto with Black Tiger shrimp, and a strawberry carpaccio. For lunch, the selection includes an appetizer, main course and a dessert for 28 euros ($31).

There are also new dishes for sharing, such as the mezze plate. Cocktails include the #BrittanyBaby, whose name gives a nod to the favorite hashtag of Colette’s p.r. Guillaume Salmon, who frequently posts pictures of France’s Brittany region on social media. The drink contains a mixture of several types of rums and spices.

Le Coin Gourmand (“The Gourmet Corner”) is a new feature at Les Bains concept store across the street from the club. It serves coffee from Belleville Brûlerie and pastries to take away, including some gluten-free options. — Laure Guilbault