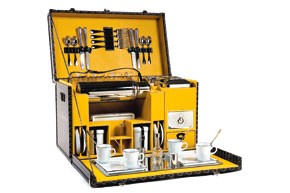 LACE UP: Calling all lace lovers. Solstiss has opened its first Comptoir de Dentelle, or lace bar, on a by-appointment basis. The lacy space, situated in the firm’s Opera flagship, proposes around 1,000 variations of the whimsical fabric, available in minimum orders of four-meter cuts. Prices range from 25 euros per meter, or $39 at current exchange, for a Lycra-based lace, to 250 euros, or $390, per meter for one of the house’s hand-embroidered designs. A new bridal range is also available.

ETC…: Boasting a mouth-watering menu conceived by Ledoyen’s three-star “It” chef, Christian Le Squer, Etc… is becoming one of the city’s buzziest eateries. Not for the faint of heart, the restaurant’s underground kitchen offers adventurous combinations from the sea and land, such as its “Fantaisie Voyageuse” starter: chilled rolls of chicken liver, lamb’s feet and haddock, served with a rich mayonnaise sauce. House specials include a nouvelle take on the black pudding, served with a gentle passion fruit sauce and onion mashed potato. Situated a hop away from the Trocadero, the site’s soberly stylish decor melds gray upholstered banquets with touches of gold, wood and mushroom lacquer, while the restaurant’s très modern waiters are outfitted in dark denim aprons. An average menu at the restaurant costs around $110, without wine.

TEAMWORK: Adding a dose of high school drama to couture week, Alexis Mabille has hooked up with cult French jewelry designer Lydia Courteille for his naughty schoolgirl-themed collection. The show will take place Monday at the Musée Galliera. “I liked the idea of a little girl who has rummaged through her mother’s jewelry box and who is out parading it about,” said Mabille. Courteille’s opulent embellishments include a white opal crab brooch in a tangle of black gold seaweed dotted with diamond starfishes and rubies, and a high impact dragon necklace featuring white and brown diamonds, rubies and engraved turquoise. Next up, the pair will collaborate on jewelry line, including sparkling accessories.

EAST MEETS WEST: A soupçon of Japan is on display at the Bagatelle garden in the Bois de Boulogne. The Paris mayor’s office and Tokyo’s Bunka Gakuen Foundation are presenting an exhibition of kimonos to mark the 150th year of Franco-Japanese relations. The show charts how the kimono has changed little since the 15th century and how it has remained a staple in Japanese culture to this day. Rich decorative motifs reflect Japan’s unique sensibility towards nature while visitors are sure to be intrigued by the ceremony and tradition involved. The exhibit’s 60 some kimonos are on display through July 15.

ART SMARTS: Paris is certainly living up to its name as a cultural feast. “The Grace Kelly Years: Princess of Monaco” exhibition at City Hall is a fascinating look at the famous late princess. Equally engaging is the Jeu de Paume’s Richard Avedon show, while the Musée Rodin is exhibiting a selection of Camille Claudel’s work. Meanwhile, at Versailles, Karl Lagerfeld’s 40 large-scale black-and-white photographs of the famous chateau will be on display through Sept 7. And any fashion fan has to check out the Valentino show at the Musée de la Mode et Textile.

CHEZ MARIA: After 20 years on the Rue Cambon, retailer Maria Luisa Poumaillou is moving her store around the corner to 7 Rue Rouget de L’Isle. Poumaillou said the new space allows her to group women’s ready-to-wear and accessories under one roof after the two categories had been stocked in separate stores for years. “It will optimize the selling process,” explained Poumaillou, who enlisted fashionable architect Laurent Buttazzoni to design the elongated space with a modernist aesthetic. Poumaillou is keeping her separate men’s shop right across the street.

MARSEILLE BOUND: Jean Touitou has opened his third APC outpost in Paris, at 5 Rue de Marseille in the 10th arrondissement. Designed by architect Laurent Deroo, it is located in one of the city’s trendy up-and-coming neighborhoods. But Touitou said that wasn’t the draw. “The street has a great baker,” he quipped. “And I liked the name of the street. And I like the number five.” The store is the most recent in a string of projects Touitou has cooking. The designer is working on a scent line, and in August he will open a store in Copenhagen where he will sell vintage Scandinavian furniture. Touitou meanwhile will perform with his band in Tokyo when he opens a second store in the city in late July. And he has a Paris surplus store opening in Montmartre, also in July.

SWEET HOME: Former Emanuel Ungaro designer Vincent Darre is ditching fashion (somewhat) for home decoration with a shop on the Rue Mont Thabor that will showcase his playful furniture designs. “Luxury for me is rarity,” explained Darre of the shop. “I wanted a shop where you see something new, something you can only see in Paris.” Darre’s furniture has a surrealistic bent: table legs are formed like bones and the back of a chair is carved to look like vertebrae. The shop’s name itself, which, in French, is a play on words that means both prison and home, points to Darre’s cheeky aesthetic.

He plans to offer decorating services and, eventually, the shop will carry cutlery and porcelain services of his design. His enlisted several close friends to make jewelry for the store and perfumer Frédéric Malle is brewing a fragrance that Darre will sell, too.

LES PRAIRIES DE MARAIS: With life-size shots from Michelangelo Antonioni’s 1966 film “Blow-Up” as its opening show, the new store for trendy Parisian brand Les Prairies de Paris is both art gallery and boutique. Below the first-floor exhibition space, painted black from floor-to-ceiling, is a contrasting light and airy basement housing women’s wear by designer Laetitia Ivanez plus a new mini men’s collection and a children’s line. Quirky features, such as a set of vintage headphones hanging outside so customers can listen to the store’s playlist, or cartoons beamed onto the walls, underscore the contemporary flair of the 12-year-old label, whose bright, printed T-shirts, knitted waistcoats and shirtdresses epitomize casual French chic.

ARES YOU HOME? Style is key at the Arès Hotel, recently opened near the Eiffel Tower. Its modern take on Old World luxury includes punchy leather furniture by Poltrona Frau, Baccarat and Swarovski crystal lighting, Versace mosaics in the bathrooms and even Hermès body care products. With 40 individually decorated rooms and suites in warm shades like turquoise, gold and burgundy, the Arès is an intimate address. Guests can look forward to a fresh continental breakfast and to curling up with the daily paper by the fireplace in the library.

PICK YOUR POISON: A potpourri of accessories stores has arrived in time for Paris’ summer season. Joining fashion’s expanding Palais Royal posse, glovemaker Maison Fabre will open its first boutique in the storied arcade on July 1.

Near the Place de la Concorde, Mell, one of the hippest additions to the city’s retail scene, offers an ever-changing range of high-end jewelry and leather goods brands, including Alexander McQueen, Diego Dolcini and Bruno Frisoni, backdropped by an in-store foot spa. Located at 8 Rue Royale, the space is the brainchild of Philippe Melloul, founder of the French shoe chain Biondini, and Numero journalist Pascale Renaux, who disclosed that the pair are mulling a men’s equivalent.

BEAUTY BOOM: Recently, a spate of stores selling fragrance, cosmetics and scented candles has opened in the City of Light.

In the heart of the Marais district lies the 280-square-foot freestanding Diptyque store, which carries the brand’s entire line of candles and scents. It’s the second such shop in Paris after Diptyque’s original location in the Saint-Germain neighborhood. A few streets away, also in the Marais, is the Different Company’s 330-square-foot shop retailing the niche brand’s selection of fragrances and candles.

Then, across the Seine, on the Left Bank, is Comptoir de l’Homme. Billed to be the first men’s multibrand beauty shop, the 555-square-foot space stocks products from 33 skin care brands, including Biotherm, Task and Groupe Clarins, plus five fragrance names, including Aqua di Parma, Penhaligons and Etat Libre d’Orange.