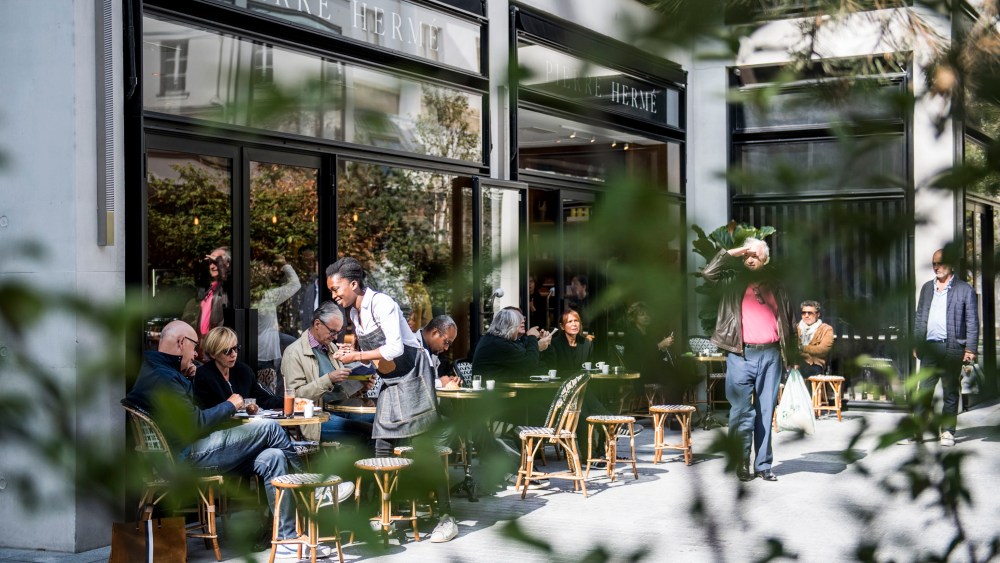 THE LIGHT TOUCH: Forte Forte’s new Paris store is an eye-catcher. Light and airy, it draws people off the street and down a few steps — in sparkling granite and polished pink onyx. Brushed brass tubing permeates the space, used for lighting, clothes racks and Bauhaus-inspired mirrored screens. Slabs of rough granite are pieced together to form broad geometric patterns for the floor, with the occasional brass accent. White leather daybeds sit in the middle.

Motivation for the store, a second address for the Italian company? A love of Paris, said the label’s designer Giada Forte and her life partner Robert Vattilana. Trained as a graphic designer, Vattilana, who was the creative force behind the store design, works alongside Forte and her brother Paolo Forte, who manages the business’ organizational side.

Dig a little deeper and they will relay tales of their ties with French capital over the years, one involving a crucial order from some friendly women who happened to be buyers for the Left Bank institution Le Bon Marché. Just as the designer draws on personal relations to source top-quality fabrics with suppliers in her native region, inland of Venice, the store is infused with personal touches.

COUTURE STORIES: Add Schiaparelli to the historic houses lining the Place Vendôme that are pushing open their doors, pulling in the public with tales of the past in a bid for the future. Tucked among the high jewelers and the Ritz hotel, Schiaparelli is opening a salon boutique offering limited-edition ready-to-wear clothing and accessories. Called Story #1, the rtw collection will feature dresses, blouses and T-shirts inspired by Man Ray and playing on references from Elsa Schiaparelli’s universe, like padlocks and pierced hearts, as well as touches of shocking pink here and there. The Secret of Schiaparelli bag, which has been in the house collections since 1931, is made in France employing traditional methods. The house called on French chef Cédric Grolet to make a cake, and Tokyo-based Danish florist Nicolai Bergmann for boxed bouquets of hot pink flowers, while French artists Kuntzel + Deygas created an animated film evoking the relationship between the Italian aristocrat and Man Ray.

One could spend the day at Beaupassage, a new foodie thoroughfare perched between the Boulevard Raspail, the Rue de Grenelle and the Rue du Bac in the 7th arrondissement. Here it’s possible to pick up a baguette at Thierry Marx’s boulangerie, coffee at the Café Pierre Hermé, a bottle of wine from Yannick Alléno’s Allénothèque or stop for an organic meal at Anne-Sophie Pic’s premium fast-food eatery, Daily Pic.

On the other side of the Seine, Hélène Darroze opens Jòia, an ode to the Basque and Landes regions. On the ground floor, the restaurant delivers typical Southwestern cuisine — think brioche chicken in foie gras or roasted hake from Saint-Jean-de-Luz — and wines from exclusively female growers. The upper level is a cozy cocktail bar with the not-to-be-missed Bloody Mary infused with Timut pepper, Darroze’s signature spice.

If spice is your thing, Double Dragon has it in spades: The second restaurant opened by sisters Tatiana and Katia Levha, the Franco-Philippian duo behind the Servan, focuses on mixing flavors found in Thai cuisine. Expect spring rolls laced with shiso, caramelized beef cheek and green beans in sesame cream.

Another beast lends its name to a recent Paris opening: Girafe is the latest brasserie by Gilles Malafosse and Laurent de Gourcuff, the team behind Monsieur Bleu at the Palais de Tokyo and Loulou at Les Arts Décoratifs. Located at the Cité de l’Architecture, Girafe focuses on fish and seafood dishes. Its terrace boasts a breathtaking view of the Eiffel Tower.

PERFUME PLACE: A pop-up concept shop celebrating niche perfumery made its debut in France’s capital on Sept. 1. The brainchild of fragrance creator Virginie Roux and architect and designer Emmanuel Pierre, it’s meant to encompass the worlds of perfume and art.

There’s a gallery, as well, with more conventional works of art — think paintings and sculptures, for instance — by contemporary artists such as Sigrid Menage-Engelbach.

La Place holds conferences, on subjects such as the history of paper and perfume, fragrance flacons and female perfumers, and olfactive and multisensorial ateliers.

La Place will shutter at the end of December.

TRUE COLORS: Fall brings color to not only trees but also museums in Paris.

At the Petit Palais, “Jakuchū, The Colorful Realm of Living Beings” gathers 30 hanging scrolls vividly depicting animals with delicate brushstrokes. The Japanese artist’s complete series is showcased for the first time in Europe for a month only, given its fragility, and reveals fascinating silk painting techniques.

The Musée d’Orsay is displaying blue and pink hues with a show re-examining Pablo Picasso’s famous namesake periods. The exhibit sheds new light on his early years, from 1900 to 1906, through 300 works.

Slavic vibes are in the air at the Luxembourg Museum, with an Alfons Mucha retrospective. Beyond iconic Art Nouveau posters and decorative works, this exhibition focuses on the Czech painter’s ambitious project dedicated to his homeland.

Also on the Left Bank, 50 sculptures by Alberto Giacometti are on show at the Maillol Museum offering a vast overview of his career through comparisons with major masters of his time, such as Auguste Rodin and Constantin Brâncuși.

Artistic relationships are examined, as well, at the Musée Jacquemart-André with “Caravaggio, the Roman Period, Friends and Enemies,” a show including seven masterpieces by the master of chiaroscuro never before shown in France. The Italian painter led a rich life in Rome, surrounded by not only supporters but also enemies, who pushed him to murder, resulting in his definite exile from The Eternal City.

Isolated people star in black-and-white prints at contemporary image center Le Bal with the first major exhibit devoted to American photographer Dave Heath in France. Three cult movies from the Sixties accompany the portraits and create a compelling glimpse of an alienated society in the Beat Generation’s era.

“Jakuchū, The Colorful Realm of Living Beings,” through Oct. 14

“Picasso. Blue and Rose,” through Jan. 6

“Caravaggio, the Roman Period. Friends and Enemies,” through Jan. 28

NATURAL BEAUTY: Two organic spas have sprung up in Paris. Suisen, in the Marais district, was designed to give the feel of a traditional Japanese inn, called a ryokan. The 1,110-square-foot location, with five cabins, has a straw ceiling, bamboo floor and washi wallpaper.

All of the aromatic oils used in the treatments and the Suisen green tea — a selection of which are sold in the boutique — are organic.

The tailor-made treatments here are shiatsu-based and include a facial treatment and body toning. Prices range from 105 euros for one hour to 180 euros for two hours.

Also on the Right Bank is Les Jardins Suspendus, an organic boutique and spa. It took more than one year for the team behind it to choose the natural and organic products to stock and use in its treatments. These come from the brands such as Paï, Les Huilettes, Joveda and De Vermalle.

The spa, boasting two cabins, is on two floors and covers 890 square feet. Treatments are personalized, with facials starting at 45 euros for a half hour. Body treatments include the hour-long relaxing and enveloping signature massage, which goes for 85 euros, and the 60-minute Balinese relaxing and tonic massage for 95 euros.

TRAVELING GREEN: This Paris Fashion Week, zooming from venue to venue no longer needs to come at an ecological cost. After landing in the French capital in June, electric scooter company Lime has partnered with the Fédération de la Haute Couture et de la Mode to deliver fast and sustainable transport during this women’s ready-to-wear season. Additional bright green Lime electric scooters are being dropped off outside major fashion shows on the official calendar. For 1 euro, travelers can unlock each device using the Lime app, which charges 15 centimes per minute of use.