Meaghan Dorman of Manhattan speakeasy The Raines Law Room opens her new spot, which is dubbed a cocktail parlor, today. 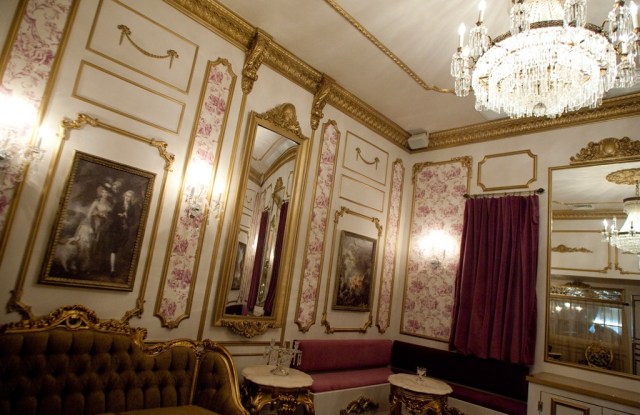 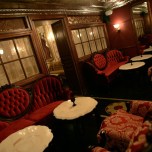 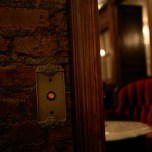 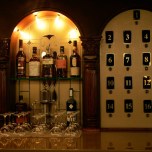 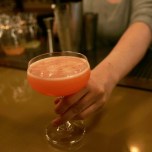 “It’s like Raines’ little sister. The big sister’s grown up; she’s in college,” Meaghan Dorman says. “We wanted to make this place more whimsical, a little more fun.” Dorman, the head bartender at one of Manhattan’s favorite speakeasy, The Raines Law Room, has her bottle-red hair swooped up in a bun as she strains a whiskey concoction into a tumbler. She’s behind the dimly-lit bar of her new spot, Dear Irving, which opens today.

“It’s slightly spicy,” she warns, pushing the glass over. The drink, a Whiskey Business, is a blend of rye, ancho chile liqueur and Angostura bitters. A cinnamon-sprinkled lemon slice bobs on top. “It has a smoked pepper note so it’s got a little kick.”

Dear Irving, dubbed a cocktail parlor, is the second of Dorman’s ventures. She’s partnered again with Alberto Benenati and Yves Jadot, though this spot will be without the whole unmarked door, doorbell-ringing gimmick of The Raines Law Room. Dear Irving’s entry policy is that reservations are encouraged (they will be accepting them come Monday) but walk-ins are always welcome.

On a recent Wednesday, at a preopening cocktail fete, the boîte is crowded with a rabble of assorted scene-seekers. A trio of giggly p.r. girls are posted up by the bar. Some French-speaking hipster-types clink their tumblers in the back room. A handful of strapping young suits are perusing a vintage Playboy in the front.

“Even for being just four blocks away, we’re in a different neighborhood [than Raines] so we’ll get some overlap and a new type of customer. I think there will be a lot of before-and-after dinner traffic. That’s always our standard — would a date be happy here?” Dorman says.

Like Raines, Dear Irving has that quaint, of-another-era feel thanks to Delphine Mauroit, who furnished both places. Woody Allen’s “Midnight in Paris” was Mauroit’s inspiration for Dear Irving, although the decor very much sidesteps the kitsch factor. The space is structurally long and linear. It’s cleaved, railroad style, into four distinctly designed quarters that flow seamlessly into one another. The first looks like Don Draper’s apartment, meticulously midcentury modern with wing-back chairs, Art Deco fixtures, zebra-print walls and said vintage Playboys. Guests drift through to the second area, a Twenties-themed booth-heavy space that exudes a Gatsby vibe. Glittery beaded curtains pen in guests plopped down on cushy sofas. The bar is the centerpiece of the third section — its done half in the Twenties style, half circa 1880s with Gothic elements such as vaulted ceilings and pointed arches. The back room is whimsically done in a bourgeois, rococo-style salon with brocade upholstered furniture, chandeliers and gilded moldings. They call it the Marie Antoinette room.

Throughout the space, the furniture is deliberately staged to foster quiet nooks and intimate conversation. “When people go to Raines, they lose track of time. It’s an immersive experience and we wanted to bring that here,” Benenati says. “To have that feeling of being transported.” Another Raines-esqe touch: the buzzers. Each table has a doorbell-looking buzzer to summon a server over for another round.

“They’re not all, like, crazy, alcoholic bartender drinks,” Dorman says of the cocktail offerings — 10 house creations and five classics. “I wanted a menu that has something for everyone — whether you want something light and refreshing or boozy and bitter.”

Dorman predicts the Vice Versa — a crisp mix of gin, grapefruit, pamplemousse liqueur and rose cava — will be a bestseller. “The gin is Dorothy Parker gin from Brooklyn, which has hibiscus and elderflower in it. So it’s nice and floral but still interesting with that bitterness from the grapefruit,” she says of the drink, a bubbly coupe of shock-pink. “I would drink it all day.”