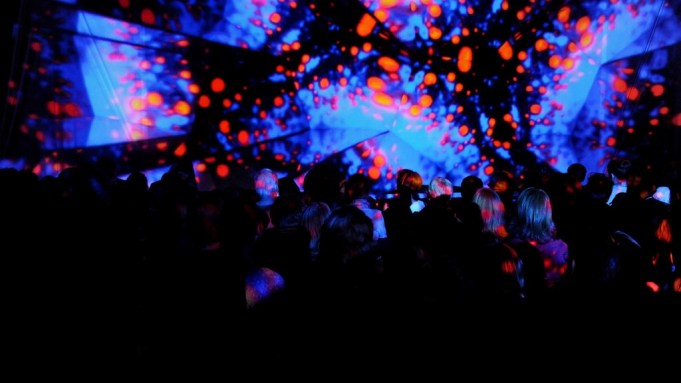 Six days after Hurricane Sandy’s aftermath postponed its opening night, the Parrish Art Museum debuted its new $25 million home on Friday evening in Water Mill, N.Y. The museum’s 600-foot-long structure — designed by Swiss firm Herzog & de Meuron — is akin to an East End-appropriate barn, albeit on a grander scale, and was constructed using the most humble of components: wood, concrete and sheets of corrugated metal.

“The simple and very industrial materials all contribute to the tapestry of the museum,” said Phil Schmerbeck, an architect with Herzog & de Meuron’s New York office and project manager on the museum. The textured concrete on the building’s facade, he pointed out, was inspired by concrete found in the basement mechanical room of another project.

The space’s quiet elegance was not lost on the crowd.

“The artists love it,” said Dorothy Lichtenstein, widow of Roy. “That is a good sign. I think they appreciate that the space does not intrude on the art.”

The museum, which sits on 14 acres off Montauk Highway, boasts seven enclosed galleries, one open gallery, an auditorium, a terrace, a cafe, a gift shop and space to house archives.

Ross Bleckner was delighted with the museum’s atmosphere.

“The art sings off the walls in this space,” he said. “It’s small enough to feel intimate yet large enough to give it an international feel.”

Other guests included Malcolm Morley — who came dressed in a red tartan suit, and proudly showed off some 50 pieces of his work that inaugurated much of the new space — as well as Eric Fischl and April Gornik, who also had pieces on display.

For many involved, the four-and-a-half-year effort to build the museum was a labor of love. Alexandra Stanton, vice president of the museum’s board, arrived wide-eyed and exuberant.

“The space is so seductive,” she said. “In these economic times, a place like this, which is very much a cultural center of the East End, brings hope and optimism.”

Rufus Wainwright, who owns a house in Montauk, also praised it as approachable and warm. “It has a museum feel but with beach funk,” he offered, adding that it will also make the bumper-to-bumper trip during the summer more bearable. “Who wouldn’t want to get out of traffic and kill an hour or two in such a beautiful place?”