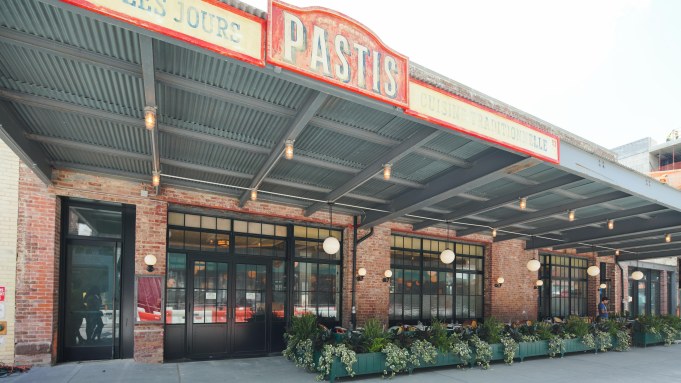 In 2014, longtime fans of Pastis mourned the closing of one of Meatpacking’s original hot spots. But what comes around goes around, and the iconic New York restaurant has finally reopened, hoping to lure back the starry and fashion-y crowds of its heyday.

The reopening is helmed by original owner Keith McNally and fellow Meatpacking restaurateur Stephen Starr, who teamed up in 2018. Pastis originally opened in 1999, paving the way for Starr’s nearby Buddakan and Morimoto and helping transform the landscape of New York’s Meatpacking District into the scene-y nightlife destination it is today.

“I wanted it to be reminiscent of the original Pastis, without being a replica of it. In helping to put this together, I tried to recapture the spirit of the original Pastis more than its physical details,” writes McNally in an e-mail. “Pastis worked because it was a very good all-day bistro, which made a cross section of people feel very comfortable dining there. This sort of place works forever, not simply in 1999.”

Pastis 2.0 is a mix of old and new. The restaurant, which is located just a few doors down from its original location at 52 Gansevoort Street, incorporates items salvaged and stored from its first iteration, including white institutional tiles, vintage mirrors, wall sconces, overhead globes, and many of the dining room chairs and tables. There are changes, too: the restaurant’s new facade is metal instead of wood, and overall the new space is bigger and airier; the dining room seats 180 indoors and 30 on an outdoor patio.

While McNally spearheaded the design aspects, Starr and his team worked on upgrading the French bistro-style menu.

“The cuisine was good before, but it was more about the comfort of the place and the familiarity of the people to each other,” writes Starr. “We couldn’t reopen this restaurant without the steak frites and steak sandwich or we fear there might be riots. Twenty years later, the New York City dining scene is a different beast, so we’re adding some new dishes like the skate moutarde, veal escalopes and the filet au poivre.” The menu also includes expected fare like a niçoise salad and tuna crudo.

Pastis’ longtime devotees have already taken notice, with design insiders such as Jeffrey Kalinsky, Rachel Feinstein, Carlos Mota, Amy Astley and Amanda Brooks flocking to the restaurant ahead of its Friday night reopening. “There is no place like home!! Thank you Keith McNally for coming back,” wrote Kalinsky on Thursday, captioning an Instagram shot of the menu. While the restaurant is reopening only with dinner service, breakfast, lunch and brunch will soon follow, restoring the bistro to the all-day service its fans remember.

As for what makes McNally and Starr such a powerhouse — aside from the obvious merging of two New York dining veterans, both with track records of high-profile openings — McNally points to their different but compatible approaches.

“Stephen is far more organized and rational than me, but my James Beard Award is bigger than his,” McNally says. “I’ve learned a lot from Stephen, but naturally it goes in one ear and out the other. And it works the other way, too. Stephen doesn’t listen to a word I say, thank god.”

“Pastis closed down way before its time. Who wouldn’t want to see such an icon return to the restaurant scene in New York City and partner with one of your heroes?”