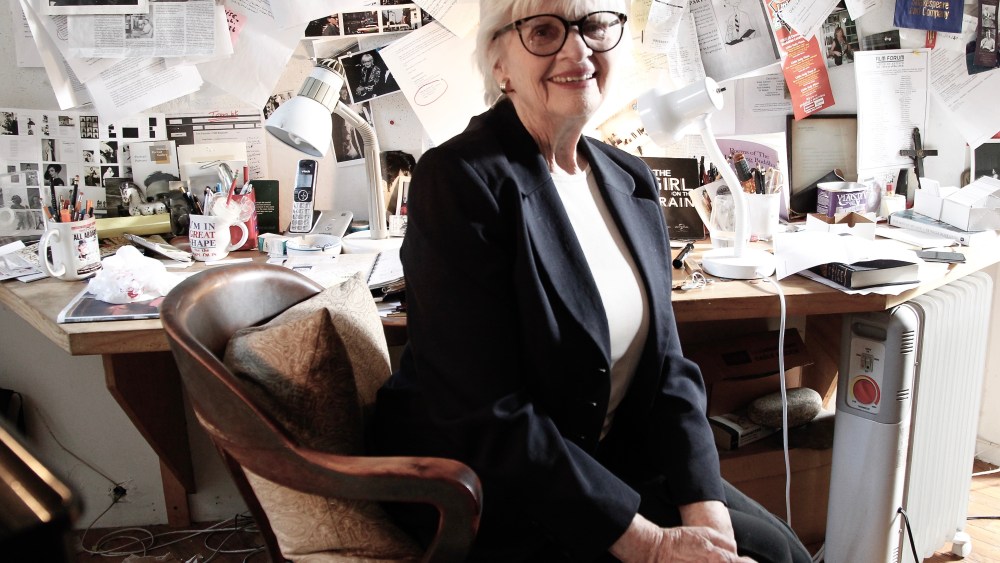 Patricia Bosworth is now best known as a biographer of Diane Arbus, Marlon Brando and Montgomery Clift, but she started her career in a completely different métier — as a model and actress, the latter onstage and in films.

She was a member of the Actors Studio at the time that Marilyn Monroe belonged to it. She met Steve McQueen, and had a big crush on him, although McQueen scrupulously informed her that he was in love with someone else and no romance ensued.

Now Bosworth has written a much-praised new book about that period, called, “The Men in My Life: A Memoir of Love and Art in 1950s Manhattan” (HarperCollins). This is Bosworth’s second foray into memoir. She also wrote “Anything Your Little Heart Desires: An American Family Story,” which was about her relationship with her father, lawyer Bartley Crum.

The crux of her new book is the unusual fact that both her younger brother, Bart, and her father committed suicide.

She says the part of the book she most enjoyed writing was about performing as Laura in Tennessee Williams’ “The Glass Menagerie” opposite Helen Hayes, in Palm Beach. At that time she met Gore Vidal, who advised her on her transition to writing and became a lifelong friend.

Bosworth’s father was a successful young lawyer who founded his own firm when he decided to take on the defense of the Hollywood Ten — directors, producers and screenwriters who were accused of being Communists by the House Un-American Activities Committee. Crum took on the work because, he believed, it would be “a piece of cake,” since it wasn’t against the law in the U.S. to be a Communist.

In the end, however, his clients went to prison. His own career was substantially damaged by his association with the group, and he went from making a large income to worrying about how he was going to support his family. The lucrative corporate clients of the past disappeared. Bartley Crum tried to commit suicide several times and eventually did so with an overdose of pills.

Bosworth, a slender woman with bright white hair, lives in a building with an elaborate gate on the far West Side of Manhattan. The study in her ground-floor apartment, one that any writer would envy, features an extensive collage of photos, clippings and other ephemera. A large image of Charlie Parker, taken by her third husband, photographer Tom Palumbo, is a notable detail of the main room. There is a charming wedding photo of her marriage to her second husband, writer Mel Arrighi, in the memoir.

The writer suggests in her book that one reason for her brother’s suicide may have been that he was struggling with his sexuality. Her mother, she says, was “really before her time. She was doing research about sex. She read ‘The Kinsey Report,’ which came out in 1948, and Simone de Beauvoir’s ‘The Second Sex.’”

Asked whether she thinks that her parents would have liked her new book, Bosworth said that she thought her father wouldn’t. “I question his sexuality,” she says. “He was very antigay. My brother was deeply depressed, and he loved to listen to music. [He had the opportunity to go away to a music camp], but my father didn’t want him to be around ‘fairies,’ and this camp happened to be run by a number of prominent gay composers [among them Marc Blitzstein], so he wouldn’t let him go.” While attending Reed College, Bart shot himself in the head.

Another serious family problem was that Bosworth’s father died intestate, leaving only $12,000 in the bank. “I had to support my mother,” she recalls. “I had to take on a responsibility that I didn’t want.

“My father made a great deal of money, but he was like W. Randolph Hearst — he spent it all,” she added. “[Then] he was blacklisted, and the FBI trailed him. He finally got Rita Hayworth as a client in her divorce from Aly Khan, which led to Montgomery Clift and Judy Garland. But he just was terrible with money, very extravagant.” Bosworth met Clift at that time.

Meanwhile, her mother didn’t even have a checkbook.

“I’m very, very careful with my money. I watch it like a hawk,” she adds. For her father, a lawyer, to die without a will, “it’s shocking to me. It was a mess.” She paid some of her father’s debts, but was unable to pay all of them, which in any case she was not legally obligated to do. “I made more money after I became a writer,” she says. Her books have been New York Times bestsellers. “With the book about Diane Arbus, selling it to the movies [for the film ‘Fur’] made a lot of money.”

Another remarkable episode in her life was her early marriage to a young man, Jason Bean, who believed that he was a great artist but who didn’t want to work. One of the few advantages of this relationship — which became abusive, mentally and physically — was that he wanted Patricia to get jobs. He suggested that she become a model. After having been turned down flat by Eileen Ford, who pointed out that she was too short, Bosworth was snapped up by John Robert Powers, the oldest modeling agency in the city, and found steady work. As a model, among the photographers she worked for was Arbus, at that time a fashion photographer who worked in tandem with her husband Allen. The writer had been married to and divorced from Bean by the time she was 20.

As a young woman, Bosworth had the prettiness of the classic girl-next-door ingénue, which was a good fit for both stage and film work. When she began acting, her father suggested that she use her mother’s maiden name, Bosworth, rather than her real surname, Crum. Her original moniker was simply too tempting a potential target for wiseacre reviewers: ”crummy performance by Patricia…”

The book has a number of charming anecdotes about the Actors Studio, including one scene at a party, when Paul Newman and Monroe cleared the floor by dancing together for a few minutes.

The apex of her film career was playing a nun — Audrey Hepburn’s best friend — in the Hepburn vehicle “The Nun’s Story.” Her character, a substantial supporting role, ends up leaving the convent before Hepburn’s. Her role as Laura in “The Glass Menagerie” was the high point of her stage career.

Overshadowing all these memories is the suicides of her father and brother.

The writer believes that suicide survivors (that is, those whose close family members have committed suicide) have certain qualities in common. Among other things, they tend to be workaholics. Another of her biographies is “Jane Fonda: The Private Life of a Public Woman.” Fonda’s mother Frances, who had psychiatric problems, committed suicide by slashing her own throat. Fonda — with her stellar track record as an Academy Award-winning actress, top-rated workout guru and dedicated political activist — is clearly one of the great overachievers of her time.

Bosworth offers a copy of Fonda’s book, noting that, in view of what the two women have in common, it can be read as a companion to her new one, which took three years to complete.

“It was a catharsis,” Bosworth says of writing “The Men in My Life.” “I never mentioned the suicides to anybody — no one had known at the time. I was living by my instincts. I didn’t know how to think very well. [But] this for me remains the most vivid period in my life.”