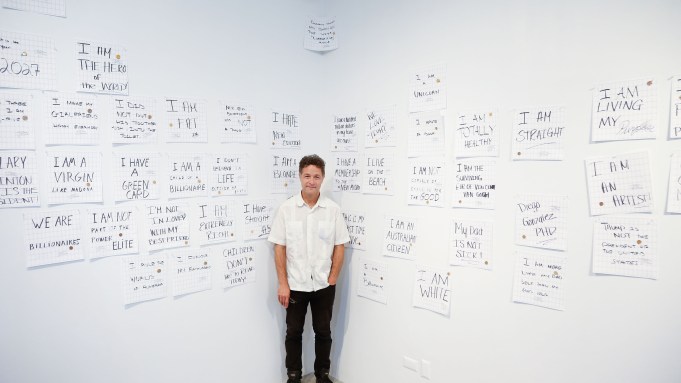 “I had this shoot once for Italian Men’s Vogue, and someone told me, ‘You know, that’s great, because then they dress you and then you get to keep everything,'” begins Paul Ramírez Jonas, taking off his rectangular glasses to give them a quick clean. “So they totally dressed me — shoes and everything — and then when the shoot was over, I just went back to my desk to sit with all my clothes. And then they were like uh…we need the clothes back,” he finishes with a chuckle.

The cheery artist, dressed casually in (his own) short-sleeved white button-down, black pants and Samba Classic Adidas shoes, was standing on the Fifth Floor of the New Museum, where his latest participatory exhibit and residency “Half-Truths” was buzzing with activity. Two walls of the room were wall-papered with notarized statements, the resulting works of his piece “Alternative Facts.”

Visitors to the “Alternative Facts” notary public station are prompted to write down a lie, those of which range from the straightforward and silly to the more heartbreaking — “I am an artist”; “I can cure cancer;” “I have a green card;” “My dad is not sick” — and then, handing over spare change, a facilitator will turn their coin into a golden coin using a chemical process, which they take as payment for notarization. “This is all about turning lies into truths,” Jonas remarks of the station, which demonstrates both legal and chemical transformations. “There’s something very creative about lying. Much more creative than being truthful.”

The lies are also limited to an easily-relatable 140 characters. “A lie can’t be longer than a tweet, and then everyone, of course, clues into that,” he adds.

Although the timing of the exhibit seems perfectly aligned with political events and topics, Jonas notes that he started much of the work in the exhibit prior to last year’s U.S. election. “I got really interested in participation. All of the pieces I’ve been making for the last 10 years try to be about participation and exchange, even if it’s really minimal. It really becomes a transaction,” he explains. “Of course in this day and age, the idea of lies being true, or things without value…it kind of resonates in a specific kind of way,” the artist adds. “Is the promise of the everyday person more reliable than a promise that a public figure has promised publicly?”

Another exhibit, “Fake ID,” prompts visitors to hand over all of their cards showing identification and payment. In return, a new ID is created for them using photocopied sticker paper; the “fake ID” will grant free admission to the museum through the end of the exhibit. Apparently, so far visitors haven’t been too concerned about handing over their personal information for the sake of art. “It’s also a conversation about security,” Jonas offers — the facilitator shreds the unused documents, which fall into a puddle on the floor of the museum.

The exhibits are intimate, slow and analogue — one on one — and will be run by a group of facilitators through the museum’s summer youth employment internship (Teen Apprentice Program). Jonas himself will facilitate “Alternative Facts” on various Thursday evenings, during the museum’s pay-what-you-wish hours. His residency will also include workshops on topics such as digital self-defense and how machine learning biases affect areas from online shopping to criminal justice.

“One of my favorite quotes is by the German playwright [Bertolt] Brecht, and he said how the world has to be presented to people as capable to change,” Jonas offers, while detailing his show’s impetus. “Describe the world to people, but describe it in a way that seems like it can change.”