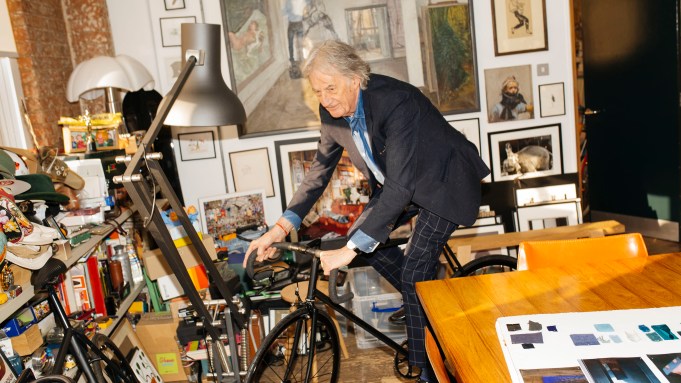 LONDON — Paul Smith is a man of many interests: Cycling, architecture, fabric innovation and music.

He’s also an art lover and has done much to support young artists over the years, particularly through a dedicated scholarship for low-income art students.

The now-acclaimed portrait artist James Lloyd was one of the first to have his tuition fees paid for by the Paul Smith scholarship. Post-graduation, he painted a portrait of Smith following a commission from the National Portrait Gallery.

“It was a lovely coming together,” the designer said.

He has also previously funded the artist duo Joe Boon and Anna Baumgart to complete their final project at the Slade School of Art, which involved dressing the columns of the University College London building in bias-cut garments.

Art has always been part of Smith’s life. Given his natural curiosity across the creative fields, he has a tendency to turn rooms into cabinets of curiosities of sorts, filled with books, memorabilia, toys — and lots of art. Art for Smith can range from a photograph by David Bailey, an embroidered letter sent from a fan or a painted portrait.

He discovered a passion for art as a teen, hanging out with Nottingham University students at The Bell Inn and Yate’s Wine Yard across the road.

“I got to know loads of students, and this world opened up where people were talking about the Bauhaus and Kandinsky, Kokoschka and, eventually, Warhol. I was fascinated by all of this, although I thought the Bauhaus was a housing estate,” Smith said with a laugh.

“And so this world of creativity opened up to me through conversation.”

A few years later, Smith set up a gallery in the basement of the Nottingham building where his first tiny store was located.

There, he displayed paintings and prints by Andy Warhol, David Hockney and David Bailey. The latter two already had become friends of Smith’s during his frequent trips to London. The store quickly became the hangout for Nottingham’s arty set.

Today, although he has entire rooms filled with sentimental, one-of-a-kind art pieces, Paul Smith isn’t too keen on the title of art collector.

“I got asked to do a talk in Paris, at the Sciences Po university, which is where [French President Emmanuel] Macron went, so pretty scary stuff, but I think I held my end all right,” Smith said.

“One of the questions was ‘We heard you’re a collector’ so I said, ‘I’m not a collector, but I have a large quantity of the same thing.’ That’s called a collector, but what I mean is that I don’t really know about the value of the things that I’ve got, I just like them,” said the designer, pointing to a series of hand-carved walking sticks created by celebrity chef Jamie Oliver.

“It’s about the joy of somebody taking something and doing it by hand.”

He is also a fan of Banksy and has “a couple of original paintings” by the artist, as well as pieces by Euan Uglow, whose work is exhibited at Tate, and who previously taught Smith’s wife Pauline at the Slade School of Art.

He enjoys prints just as much as originals and has a big collection of works by artists including Hockney, Grayson Perry and Giacometti.

“I do have some nice pieces of art,” the designer admitted.

Often he’ll turn his Albemarle Street store in London into an exhibition space to showcase works by his favorite artists and photographers. Although the shop sells his clothing and accessories collections, Smith said he wants to stay true to his original intention for the Mayfair space, which started life as a venue for showcasing furniture, art and items that Smith has collected during his travels.