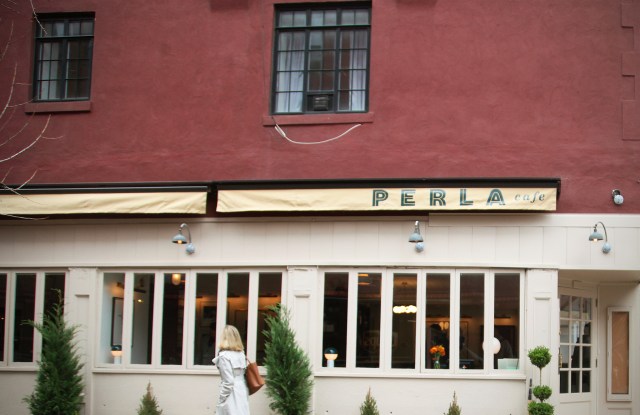 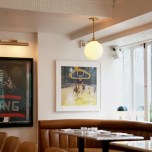 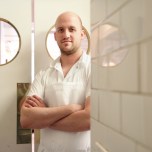 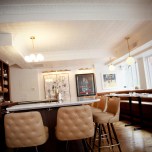 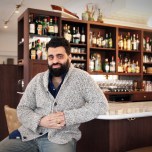 “I think there are few things that are more charming real estate for a restaurant than a West Village corner,” Gabriel Stulman says, from a table at his spot Bar Sardine. The restaurateur, is responsible for many of the neighborhood’s most sought-after tables, from The Little Owl and Market Table originally, to Joseph Leonard, Jeffrey’s Grocery, Bar Sardine and Fedora now — most at prime corner locations. This week, he moves and reopens Perla, having jumped at the chance to bring the Italian café to a plum corner spot.

The restaurant, which turned four this past Sunday, is named after Stulman’s grandmother and originally opened on Minetta Lane, “a superquaint, romantic West Village street,” Stulman, who is from the D.C. area, says. Its original chef, Michael Toscano, has since moved to Charleston, and Perla has been helmed by Jack Harris for the past year. “It’s the same family,” Stulman says. “We just found a new home. It’s exciting in the same way as when you move as a kid.”

The move came unexpectedly. “I wasn’t looking at all,” he says. He was in Bar Sardine one day when he noticed a sign had gone up in the sports bar across the street, The Windsor. “It said ‘auction,’ and I saw that it was kind of a signal that they weren’t staying in business. So I got in touch with the landlord.”

The appeal of the location is twofold. Stulman has come to build a small empire of restaurants in the West Village, all within a few blocks’ radius of one another — Perla was the outsider. And Perla was not perched on the coveted West Village corner.

The decision to move then was almost a no-brainer. “I had a restaurant that was not on a West Village corner and then I saw one that became available, and it was like, ‘Yeah, let’s move! If I don’t take it now someone else will.’”

Perla has been refocusing its menu since June, but the new space on West 4th Street called for a revamp to match. “We’ve redirected our menu to be less heavy and with less meat,” Stulman says. “We’ll have those things as accents rather than the focus. We’re trying to build the most ideal neighborhood Italian restaurant.”

To this end, house favorites including the bucatini, the spaghetti and the gnocchi will remain, but several of the dishes are being updated to feel lighter and fresher. New menu items include salmon with smoked pancetta, pearl onions, and fingerling potatoes; capellini nero with garlic, chilies, breadcrumbs, and bottarga; baby carrots with lemon yogurt, black-pepper honey, and puffed rice; and little gems with soft-boiled egg, anchovy, and golden beets. In addition, the new Perla will open for brunch and lunch service, a first for the restaurant.

As anyone who has dined in one of Stulman’s restaurants will know, decor is highly personal to him — he designs all his interiors with his wife, Gina, though he doesn’t come from a design background. “Hell no, not at all,” he says, “but I think we’re decent at design, and I would say building a restaurant is a very personal thing. When I built Perla I was 31 and had been married for a year and didn’t have any kids, and that’s aesthetically where my mind was. Now I have a four-year-old kid, and I’m inspired by slightly different things.”

His process is similar to any other self-made design enthusiast — a lot of Pinterest, magazine-tearing and cork boards. Perla’s new look is equal parts “hip-hop and sports with a boxing tone,” and “very feminine colors, materials and rounded corners.”

The new interior matches the revamped menu significantly. “A lot of people felt like it was more of a fall or winter space,” Stulman says of the Minetta location. Now, “we’re on a corner, flooded with sunlight; all of the windows are French windows, and the whole thing will open up all spring and summer long.”