The Peruvian brandy cocktail, mixed with lime juice and Angostura bitters, is one of the Latin delicacies served at new Parisian restaurant Coya.

A ceviche at Coya

PARIS — There were ceviches, Pisco sours, chicha morada and even churros served at the opening dinner of Coya, the new Peruvian restaurant taking Parisian gastronomy by storm.

Overseen by Indian chef Sanjay Dwivedi, Coya Paris is the sixth restaurant of the namesake group, which already counts spots in London, Monte Carlo, Dubai and Abu Dhabi — and it has chosen to go big for its first foray in French territory.

Located in Beaupassage, the pedestrian area in the 7th arrondissement dotted with restaurants and cafés that opened in August 2018, Coya Paris is housed in a 7,500-square-foot former church on the quiet Rue de Grenelle, transforming the historic building into an elaborately decorated two-floor restaurant complete with a bar and outdoor terrace, able to welcome 120 seated guests.

“We’re always interested in places that have character to create a unique atmosphere,” said Olivier Flamant, chief executive officer of the Coya brand. “The 7th arrondissement seemed like a bit of a challenge: There aren’t many festive places in the area. We’re here to take people on a culinary adventure and add a bit of fun to the neighborhood.”

Decorated by London-based studio Sagrada, the impressive space, laden with colorful velvet seating and traditional Peruvian shipibo pots, was abuzz on a balmy August evening for the first test dinner before the restaurant’s grand opening on Sept. 6. 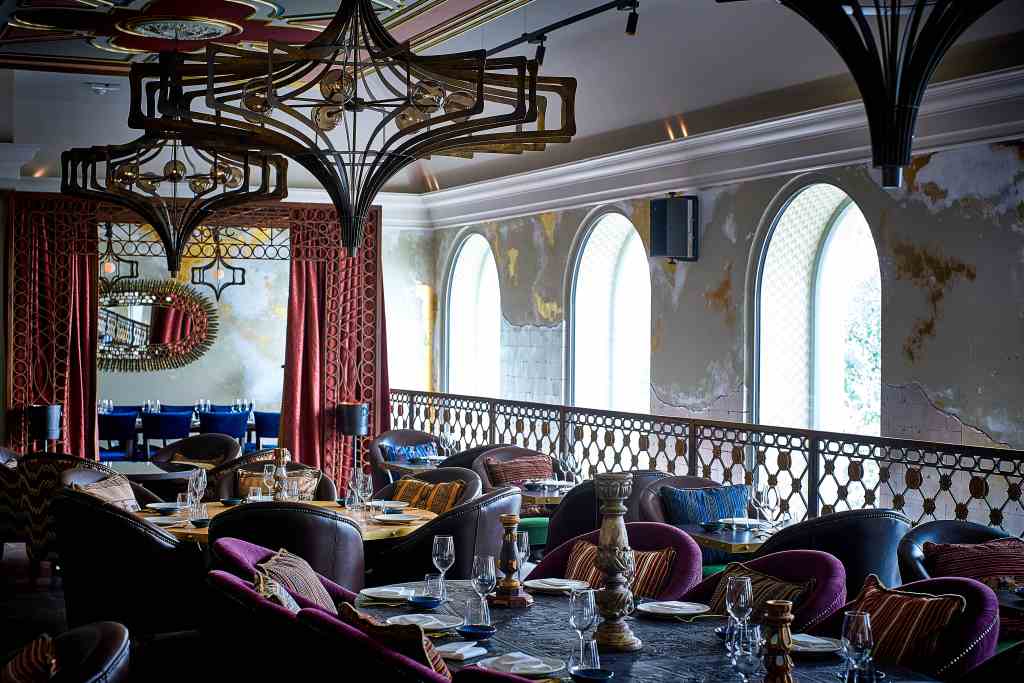 The dining room at Coya, housed in a former church in the 7th arrondissement  Courtesy

For Dwivedi — who acts as culinary director of Coya, meaning he creates the menus but leaves the kitchens to on-site chefs — the timing was right to bring Latin flavors to the capital of French gastronomy.

“Things in Paris have changed in the last three years,” said the London-based chef, in reference to the slow globalization of the Parisian food scene in the last couple of years. “People are traveling so much now; Paris is such a melting pot of different cultures. You walk in the street and you run into people from Italy, Tunisia or sub-Saharan Africa. That’s the Paris of today.”

The chef, who learnt about the Peruvian food culture following a yearlong food tour of the country to create Coya’s first menu, blends traditional recipes with Japanese influences and his home country’s approach to spices, which he built during the 10 years he spent at Indian restaurant Zaika in London.

“For me it’s important that the chili is not overpowering,” he said, gesturing to a dish of Peruvian sashimi consisting of slices of raw amberjack in a pool of green chili sauce, flavorful with just a bit of a kick. “The ingredients all need to dance together; no one is the main star.”

One dish unarguably steals the show at Coya — but it very nearly didn’t make it on the initial menu.

“When we first opened Coya Mayfair, I decided to wait a bit before serving this particular ceviche,” Dwivedi said of his black truffle ceviche, blending the sharp flavors of ponzu-marinated croaker fish with the earthy tones of truffle (it works). “I wanted to first introduce people to the traditional dishes of Peru before bringing my personal twist. Our ambition at the time was to become the best Peruvian restaurant in London.”

A third of Coya’s classic menu is left open to chef Roland Puse’s imagination, following the seasonality of French produce and his day-to-day market finds.

Dishes are made to share, whether served over mini wood fires, such as tandoori gambas still roasting over a tiny charcoal pit, or assembled in front of guests like the guacamole, which waiters mix in a stone dish directly on the table.

While the menu offers South American classics, like empanadas and T-bone steak with chimichurri sauce, the standout dishes are a balanced fusion of Asian and Latin flavors: One of these was a hefty chunk of sea bass that had been marinated for three days in a blend of miso and sake, a sauce that is also used to coat charred aubergines suitable for plant-based diets.

This isn’t a spot for purists: Alongside the traditional corn tacos, thin shrimp crisps are served to dip in the guacamole. But Coya’s playfulness works like a charm, even managing to turn chicha morada, the popular Peruvian drink made of purple corn, into an appealing dessert by balancing out the beverage’s bubblegum sweetness with tart fresh fruit. Just don’t let its dark hue put you off.