The musicians are prepping to tour the East Coast this summer. 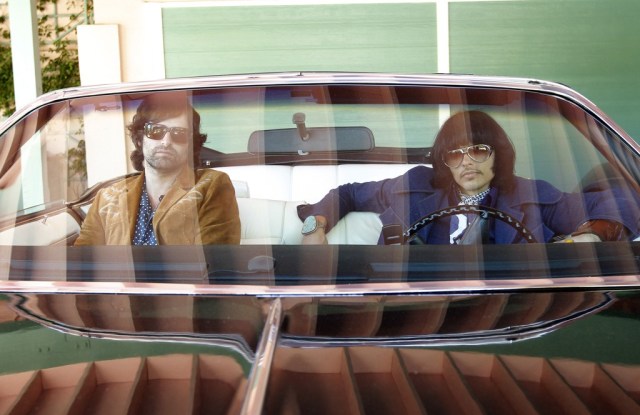 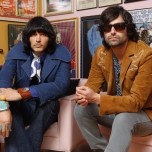 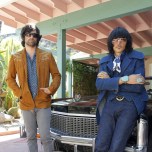 On a recent spring day in Sherman Oaks, Calif., Pete Yorn and J.D. King, longtime vets of the West Coast music scene and recent collaborators, were extending their style meld from the studio to the closet.

Following King into his pink stucco house tucked in the desert hills outside of Los Angeles, Yorn says, “You have that denim suit that fits me like a glove.”

King pulls out a jacket and vest made by Levi’s Seventies-era Panatela brand in cornflower blue denim with contrast yellow stitching.

“Borrow it for the tour,” the 6-foot, 4-inch King says as he hands the hanger to Yorn.

“It’s great — he’s taller than me but we fit the same clothes,” Yorn says.

That buddy synergy extends to their new band, The Olms. The sound that Yorn and King create floats with harmonies, a slight jangle and an old-time vibe enhanced by the vintage microphones and 40-year-old analogue tapes used in King’s recording studio. It’s music to hum on a drive to the beach. While King’s heavily accessorized fingers glide over guitar, keyboard and flute, Yorn sticks with strumming the guitar and handling vocals on most of the tracks. In stark juxtaposition to the feel-good music, the lyrics are crafted for a cynical ear. On “Someone Else’s Girl,” Yorn laments to a boppy beat, “Everyone is having fun while I sit here and cry.”

While Yorn has recorded an album in the past with Scarlett Johansson, this is the first time that he’s made a record with another songwriter. “It’s a real partnership for songwriting,” he says. “He shades my light and I lighten his dark.”

It’s fitting, then, that Yorn and King name their new musical collaboration after blind amphibians that live in deep sea caves in Eastern Europe.

“They live their whole lives in complete blackness, yet they have made the most of their situation by developing super sensory perception,” Yorn explains. “The Olms are light within darkness.”

That’s not to say their live shows are melodramatic affairs. A concert celebrating the release of their record earlier this month at West Hollywood’s Troubadour club reflected Yorn and King’s roles in music, the arts and Hollywood (Yorn’s older brothers are celebrity manager Rick Yorn and entertainment lawyer Kevin Yorn); the audience consisted of artist Shepard Fairey, Oscar-winning actor Jamie Foxx and young women who nursed crushes on Yorn. Prepping to tour the East Coast this summer, they’re ready to have fun. Both Elvis Presley fans, the men made a road trip together last year to Graceland, where they roller-skated around the King’s prized cars with his ex-wife, Priscilla Presley.

“If I ever get dark, J.D. will make it happy a little bit,” Yorn says.

“Or the other way around,” King adds.