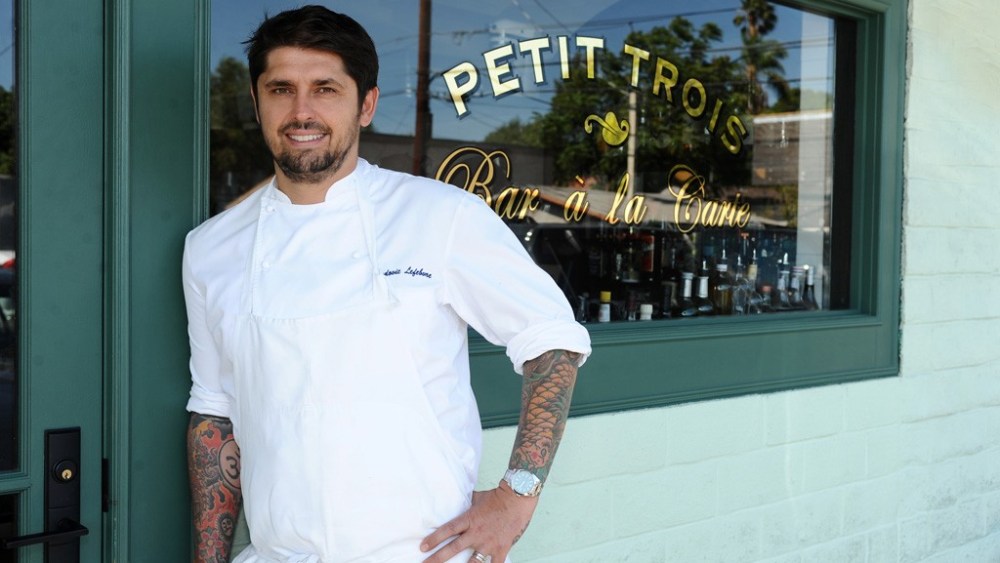 For their latest eatery in Los Angeles, chefs Ludo Lefebvre, Jon Shook and Vinny Dotolo are transplanting the flavors and spirit of the neighborhood Parisian bistro into a strip mall (of sorts) tucked behind a gas station. With Petit Trois, the partners behind the prix-fixe tasting mecca known as Trois Mec are liberating themselves from the trends that are dominating restaurants across the country. There are no small plates to share, and the molecular gastronomy tools are stowed away at Trois Mec next door. Petit Trois refuses reservations, a deliberately egalitarian policy to facilitate some jockeying to snag one of the 21 stools, preferably right in front of the open kitchen. But, as it always is with their projects, Lefebvre, Shook and Dotolo’s focus is on the food.

“You don’t have to premeditate and overthink the food,” Dotolo says. “We’re not trying to be everything to everybody. Restaurants get confused that way. ‘I’ve got vegan options, I’ve got Italian food, I’ve got French food, I’ve got pizza.’ Holy s–t — what are you?”

What Petit Trois represents is the latest move from the team to feed Angelenos something tastier than superfoods, all while building the city’s status as a capital of gourmands and bucking the belief that bigger is better.

“I want this to be small and a little bit messy,” Lefebvre says. “I don’t want anything perfect, with a waiter looking at you every 10 minutes.”

In addition to Trois Mec, which recently garnered a nomination from Bon Appétit for this year’s best new restaurant, Dotolo and Shook run Animal and Son of a Gun. What’s more, they’re hashing out plans to squeeze a wine store, pizza oven and pasta-maker into a new spot, Jon & Vinny, across the street from Animal. After racking up accolades at L’Orangerie and Bastide and crisscrossing town with his pop-up restaurant LudoBites, Lefebvre landed on television as a judge on “The Taste,” next to Nigella Lawson and Anthony Bourdain.

While Lefebvre is flirting with the idea of hiring French-speaking waiters to enhance Petit Trois’ ambience, the shoebox-size restaurant is very L.A. Hall & Oates and Whitesnake tunes ricochet off the mirrored walls and vine-patterned wallpaper selected by Estee Stanley, a celebrity stylist who recently moved into interior design. “There are a lot of detailed things that she brought in,” Shook says of Stanley.

Since it opened last month, Petit Trois has already gathered an entourage of Hollywood fans. One of Stanley’s styling clients is Jessica Biel, whose husband, Justin Timberlake, recently posted a photo of a cleaned plate and bowl of hollowed mussels from his dinner there to the delight of 165,000 of his Instagram followers. Chef Nancy Silverton, former Gourmet editor in chief Ruth Reichl and other famous foodies have also tasted the roasted chicken leg smeared with brioche-butter paste, the salad of smoked haddock and the crunchy fries served with a steak smothered in a classic béarnaise sauce. More are expected to come when they introduce the frog legs entree.

Dotolo promises that the wait for a seat won’t last longer than 20 minutes. Besides, patrons can stand in front of the white marbled bar to observe Danielle Motor mix the spot’s signature sip, dubbed Fleur de Mal, out of rose petal-infused vodka, ruby grapefruit and lemon.

“In France, we don’t eat with a cocktail but in America we do,” Lefebvre says.

For aspiring home cooks, Lefebvre is sharing the secret to his perfect escargots — ensconced in pools of butter, parsley, and shallots — a dish inspired by his mother and grandmother from the Burgundy region. “When I was growing up, I could eat seven dozen escargots,” he says nostalgically.

The trick? “Make sure you use French butter,” he says. “French butter has more fat, less water.” Bien sûr.

NEXT: Get the Recipe for Petit Trois’ Burgundy Escargots >>

PROCEDURE:
Cut butter into blocks about ¼-inch thick. Place into a medium bowl and leave out until it is room temperature.

Place the rest of the ingredients into the bowl with the butter, and fold ingredients with a spatula to incorporate. Place butter mixture into a piping bag and leave at room temperature. Fill escargot shell halfway with butter, with piping bag inserted all the way inside the shell.

Place escargot into a shell and push into the shell so that it is not deep inside and ¼-inch below the shell’s edge. Top off the shell with more butter to cover the escargot. Refrigerate overnight so that the butter sets.
Place 6 escargot shells with butter side up on a sheet tray. Bake in 475° F convection oven for about 7 to 8 minutes. The escargot is cooked when the butter is bubbling and slightly browning.