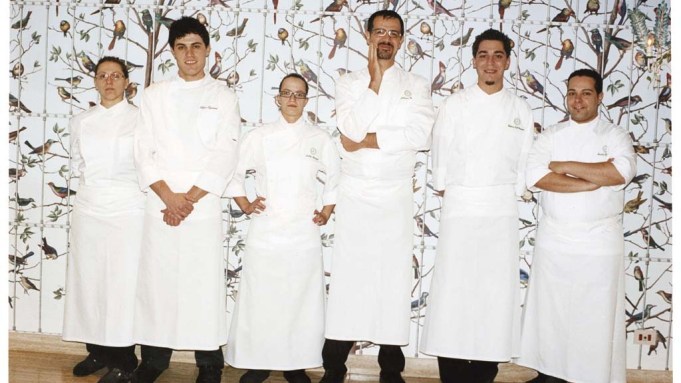 Perched on a promontory off of Tuscany, the five-star Hotel Il Pellicano has long ranked as one of the fashion world’s most glamorous getaway spots. The breathtaking setting is one of the draws, of course, but the hotel’s cuisine is equally famous. Now the food gets its very own book, “Eating at the Hotel Il Pellicano,” (Violette Editions), with food by head chef Antonio Guida, words by Will Self and photos by Juergen Teller, making his first foray into food photography.

The lush cookbook combines Teller’s unmistakable visual style with the spectacular gastronomical exploits of the two-Michelin-star-chef Guida. The cookbook, which is equally at home in the photography section, will be celebrated during New York Fashion Week at a dinner at Casa Lever with dishes prepared by Guida as well as signature Pellicano cocktails, like the Pelican Martini and The Teller. WWD caught up with Teller in London to discuss the book and his culinary experiences at the paradisal hotel.

WWD: How did you come to shoot the legendary hotel?
Juergen Teller: In 2009, Marie Louise Sció, whose family owns Il Pellicano, came to me with a strange request to photograph her hotel. And I thought, what a bizarre idea, to photograph a tacky hotel — not knowing anything about Il Pellicano. Marie Louise referenced so many photographs of mine, and had such a clear vision of who I am, I thought, this can’t go wrong. So I took a chance. I told her that my wife would be at Art Basel and I would be with my son and asked if I could bring him and my nanny, since I would be working. She was extremely hospitable, and we got on very well and I became very close friends with her family. I really like her dad, and her sister and her two brothers. But I probably know the bartender the best. It was a very, very enjoyable experience.

WWD: You got along so well that you found another project that took you back to the hotel? Why did this project take so long?
J.T.: We got along so well and were so excited about being together, Marie Louise said, “Oh my God — we’ve got to do something else together! Let’s do a cookbook!” But the cookbook took a lot longer than photographing a party in the hotel, because it was more complicated to organize. For example, Antonio [Guida] wanted to have certain autumn dishes included in the book: wild boar, and sea bass, all that palaver, so I had to go back three times in September and October. And if the chef wasn’t happy with how he presented a dish, we had to start all over. It was incredible fun! You just sit around all day long, and then you photograph his amazing creations.

WWD: And at the end, you got to eat the food?
J.T.: Well, some dishes we couldn’t eat, because of the way they were preserved. Sometimes things you would eat warm had to be chilled, because if they were warm they would run and melt. But of course, there was always something you would have to try.

WWD: Did you work with a food stylist?
J.T.: Are you kidding? No.

WWD: Did you plan how to shoot each dish?
J.T.: Well, I just shot each dish the way you would see it when you walk up to the table. Some things aren’t really perfect — let’s say ice cream, which starts to melt very quickly. Some things in the photos are a little bit uneven, and not always perfect. Instead of dry, sort of abstract shots, I wanted to have those imperfections in the photos, because that’s how the food really looks.

WWD: This is as much a photography book as a cookbook.
J.T.: Most cookbooks are oriented vertically, in order to take up less space on a kitchen counter. But for me, when you sit at a table, with a round plate, and your knife and fork and wine glasses on the side, everything you look down on is horizontal. When you eat you don’t have an upright vision of your food. So the first thing that struck me was I have to do a horizontal book, and I had to do horizontal pictures because that’s the real experience you have when you eat.

WWD: Do you cook?
J.T.: I do. I cook from Marcella Hazan, the Italian cook. I do a good spaghetti alle vongole, but my wife is a much better cook than I am. I wouldn’t want to try to cook any of the dishes in this book myself.