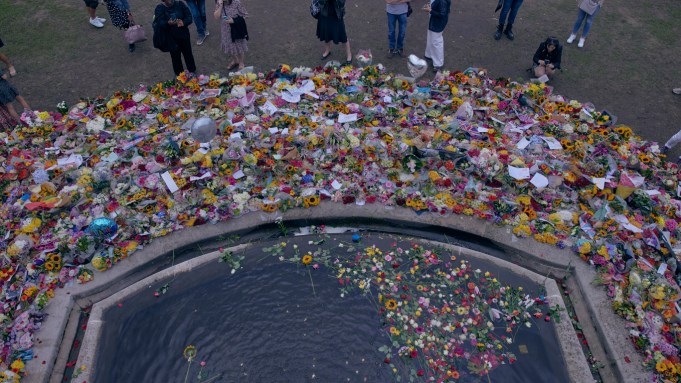 LONDON — WWD has captured photos of the British capital in mourning, hours before the queen’s coffin arrived at Buckingham Palace late Tuesday. On Wednesday, it will be moved to Westminster Hall, where the queen will lie in state until Sept. 19, the day of her funeral at Westminster Abbey.

Over the next few days, nearly one million people are expected to descend on Westminster and file past the coffin, while thousands of royal families and heads of state from around the world plan to attend the funeral of the monarch who died Sept. 8 at her Scottish home, Balmoral, aged 96.

The days immediately following the queen’s death were less frenetic, with multiple generations of families braving the rain and dark skies to place bouquets at the gates of Buckingham Palace. Children have been leaving Paddington toys and marmalade sandwiches in memory of their monarch, who appeared in a comedy sketch with the famous bear during her Platinum Jubilee celebrations in June.

Flags have been flying at half-mast in homes and public buildings across the country. In London many shop windows are blacked out, while digital advertising screens, in train and Tube stations and on the roads, have been replaced with images of the late queen. There are messages of condolence posted everywhere, including Tube stations, the halls of Marks & Spencer, cafés and restaurants.

Sports, entertainment and retail industries have been paying tribute to the queen in their own ways. On Sunday evening at 8 p.m. local time, there will be a minute of silence across the U.K. in memory of the monarch on the eve of the funeral.

London Fashion Week, which begins on Friday, has reshuffled its schedule, canceled parties, social and networking events, and suspended all activity on the day of the funeral.

The British Fashion Council is treating the week as a business-to-business event. It is also asking members of the industry to do the same and pay tribute to the monarch, who put duty before everything.

“I declare before you all that my whole life, whether it be long or short, shall be devoted to your service,” said the 21-year-old Princess Elizabeth, who kept her promise until the end.