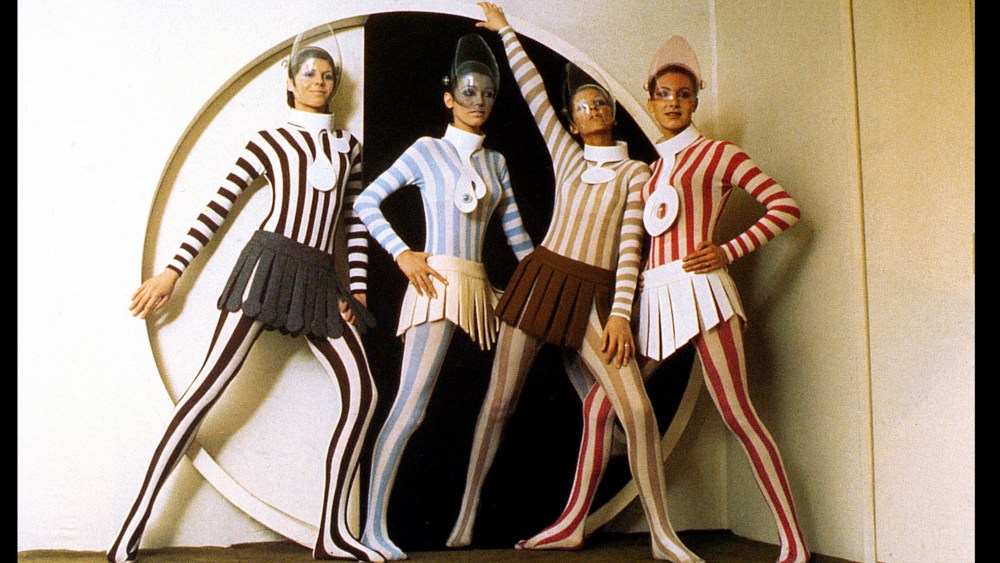 A Pierre Cardin retrospective opens in Germany this week, the first time the 97-year-old designer has featured in a “solo” exhibition in the country and the latest example of renewed interest in the design icon.

The exhibition, called “Fashion Futurist,” starts Friday at Dusseldorf’s Kunstpalast and includes more than 80 haute couture garments as well as accessories, pictures and films. Items range from those produced in the Fifties right up until 2014. Exhibits will be arranged in four categories: Visionary, Geometric, Young and Glamorous. But there’s also a particular focus on the Space-Age-inspired styles that Cardin was well-known for in the Sixties and Seventies. These include his 1966 Cosmocorps collection and 1968’s sculptural Cardine dresses.

“I was completely captivated by the way he constructed the garments,” one of the exhibition’s curators, Barbara Til, told WWD. “It was all based on geometry and what he did with fabric was amazing.”

Til pointed to what is known as the kimono dress. “It’s basically a large square of fabric that harks back to a Japanese kimono. But when you stretch out your arms, instead of a wonderful dress, you have a Henry Moore sculpture,” she said.

This is why, Til said, Cardin can still be considered to be relevant today. “We don’t realize half of the garments that he popularized. Like the overall,” she noted. “That was considered purely workwear in the 1960s, but he made it into everyday clothing.” Other pioneering looks include the turtleneck sweater for men — all those turtlenecks under suit jackets, as worn by Sixties playboys — and bodysuits for women.

The exhibition came together fairly quickly, Lit explained. Planning started late last year and she and her co-curator, Maria Zinser, were able to source most items from the existing, albeit currently closed, Pierre Cardin museum in Paris (he is in the process of building a cultural center, including a permanent display of his designs, in a former dairy in the town of Houdan, 40 miles west of Paris). One of the major challenges for Lit and Zinser was working out an appropriate setting for the exhibition. “But I think we managed to find the right architect,” Lit said. “Trés Cardin. That’s what Sergio Esposito [Cardin’s head of licensing] said when he saw it,” she boasted.

There have been other Cardin retrospectives lately, including one at the Brooklyn Museum in New York, and Lit thought that Germany had never had one before “because we Germans still argue about whether fashion belongs in a museum.” Lit conceded that her country often has a more conservative approach to clothing. “Although it’s changing slowly, we don’t have such big fashion museums or such well supplied, fashion departments [at existing museums] either,” she added.

As with many other art establishments that have taken to putting on fashion exhibitions, the Dusseldorf institute sees this as a good way of broadening its audience. “For me, it would be great if those who come recognize the beauty of Pierre Cardin’s cutting,” Til said. “It’s very sculptural. And if they see the multifaceted outputs he had, over seven decades in the business.”

The exhibition opens to the public on Sept. 19 and runs until January. To celebrate further, the Kunstpalast will also host Der Super Markt, a sales showcase for around 50 local designers, over the weekend. In typical Cardin style — the Frenchman did almost invent licensing, after all — the museum will also be selling an exclusive Pierre Cardin sweatshirt to commemorate the occasion.