The V.C.I. launched Wednesday and retails for $795.

Victor Cruz in the 2012 model of his shoe with Pierre Hardy.

Pierre Hardy has never collaborated with a celebrity before, but he feels like he picked the right one for his first partnership: former NFL star Victor Cruz.

”I’ve done shoes for shows, but this is different, very different,” the French accessories designer said at the launch event at the Goodman’s Men’s store at Bergdorf Goodman in New York.

Hardy, a pioneer of luxury sneakers, teamed with the former New York Giants wide receiver on a limited-edition men’s sneaker. Called the V.C.I., the shoe is available in three colorways, each of which is intended to represent key times in the life of the athlete.

Cruz said he’d visited Hardy’s showroom often during Paris Fashion Week for many years and they would talk shoes. But it took until March 2018 for the two to decide to work together. 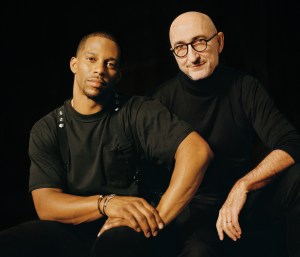 The process started with the two men discussing Cruz’s childhood in northern New Jersey, through college to his pro football career. Cruz brought select pieces of his wardrobe to the meeting and together, they settled on three pivotal years in the athlete’s life: 1996, the year he realized he loved football; 2006, the year he lost his father and grandfather and “became a man,” and 2012, the year Cruz became part of the starting lineup for the New York Giants in their Super Bowl win over the New England Patriots.

”I never worked like this before,” Hardy said. “But with Victor, it was easy.” Cruz added: “I knew Pierre was a creative and could bring it to life.”

The silhouette remains the same for each model — a thick, all-terrain sole, unique lacing details, a scrunched wrap around the back and pull-tabs on the tongue and heel — with V.C.I. in block letters on the rear. 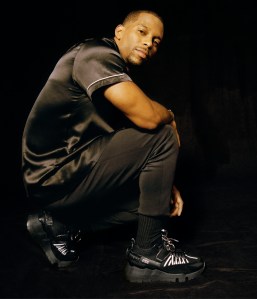 The 1996 reference is interpreted by colorblocking and camouflage panels and a gold stamp of the year on the side. The 2006 model is in black and gray with the year in a digital-clock format font. And the 2012 version is in the Giants’ red and blue color palette against a white background. 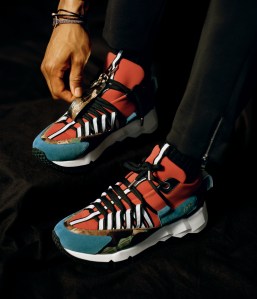 The 1996 model features colorblocking and camouflage.

“We started from taking a preexisting construction of a shoe in my collection and then we emphasized it by making it stronger in appearance,” Hardy said. “The look became something performative or Olympian — a supercompetitive shoe. We tried to push the aesthetic to the maximum, to make the sneakers as expressive as possible.”

Cruz added that “with Pierre, we captured an array of styles from when I was younger, through my college years, up until this decade. These are all landmark years in my life, and Pierre dove right in. The shoes are symbolic and together, they tell a story.”

The shoes retail for $795 and became available as of 6 p.m. Wednesday at Pierre Hardy stores in New York, Paris and Tokyo as well as online. They’re also available at Goodman’s, the Bergdorf Goodman men’s store, as well as at Kith.

At the event, the men said because the process of working together was so easy, they expect it will continue. “This is the template,” Cruz said.

And is there a Victor Cruz apparel collection in the future as well? The athlete smiled, saying: “I’ve wanted one for a while. It’s something I’ve really thought about and how I would shape my brand and tell my story. So we’ll see, slowly but surely.”

Bruce Pask, men’s fashion director of Bergdorf Goodman, said he’d known Hardy for quite some time and thought this collaboration was a “perfect intersection for us and our customer. And it’s a great way for Pierre to have an impact in America.”