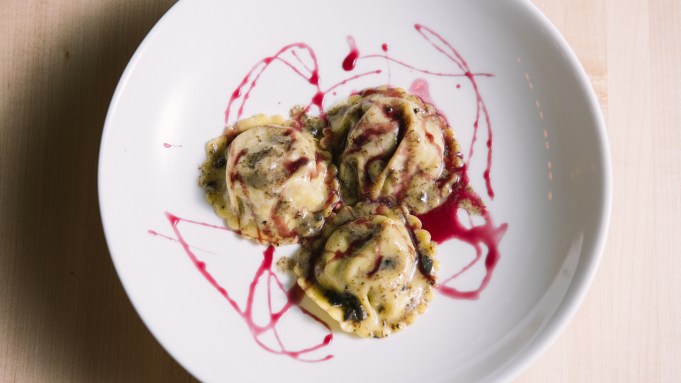 Matt Abdoo has managed to do what many dream of: marrying hobby and profession. Open today in the West Village, Pig Bleecker is the culmination of the chef’s eight years at Del Posto, most recently as chef de cuisine, and recreational foray into the world of BBQ.

Abdoo began his descent into BBQ while on a trip to Austin, Tex., during which he began a friendship with one of Del Posto’s investors, Rob Shawger. The pair began experimenting with BBQ back in New York, eventually testing out their skills at the World Championship Barbecue Cooking during Memphis in May — a sort of best of the best competition, held annually in Tennessee — where they took first place in the poultry category and second in whole hog their first year competing under the moniker Salty Rinse BBQ.

“Just to be on the stage placing in that competition is a huge deal,” Abdoo said. “And for some Yankees who haven’t really made that their life or career path to go down there and start winning things — they’re like, ‘wait a minute, what’s happening?'”

Back in New York, they continued to build on the momentum, opening casual pit-BBQ pop-up Pig Beach in Brooklyn in the summer of 2015 and again in 2016. When the pair came upon the newly vacant corner space on Bleecker, the impetus to open a permanent space — with an elevated focus, incorporating Abdoo’s culinary background — took shape. “We’re taking that Italian knowledge and love of pasta, but putting a BBQ smokey twist on it,” Abdoo said. “And presenting what is traditionally very rustic, simple — take some meat, slap it on a platter — and taking an opportunity to refine that and take it into a sit down dining experience where you’re having more composed plates.”

Despite all of his barbecuing, Abdoo views himself foremost as a chef, not a pitmaster.

“There are a lot of things I’m doing on the menu here that are directly indicative of things I’ve learned in my time at Del Posto, and my Italian travels,” he said. The result is a menu of what Abdoo coins “refined smoke-centric comfort food.” Each of the dishes include a smoked element, whether it’s a central component — smoked brisket ravioli, BBQ chicken — or through seasoning such as a smoked salt. Everything is smoked in-house using cherrywood, which brings a lighter, more mellow flavor to the food and also lends itself well to the ambience — the scent of fresh wood permeates the dining room upon entrance.

Jonny Ribeiro, owner of Hondo Designs, designed the restaurant’s interior. The inspiration for the room was “butcher shop meets country steakhouse,” which is reflected in the cozy space through brown leather upholstery, warm wood tones, a butcher block table and live edge communal table, and marble bar top salvaged from Pennsylvania. A stack of fresh wood lines one wall by the bar while a taxidermy bull head hangs above the dining room, lest anyone forget where their meal came from.

While Pig Bleecker joins a stable of BBQ joints in New York — Danny Meyer‘s Blue Smoke, Fette Sau — Abdoo is aiming to set himself apart from the pack. Plans to offer sandwiches during the daytime are in the works. “This is smokey BBQ, but it’s not BBQ,” Abdoo said of his Italian-influenced enterprise. “There aren’t too many people who are taking that approach to it.”