Sotheby's is honoring its origins in Georgian England with a cookbook that puts a new spin on old — and sometimes odd — favorites.

LONDON — What did Jane Austen have for dinner?

Anything from steak and kidney pudding stuffed with oysters, to sweet-and-savory chicken pie, to cod fried in beef fat with a side of pickled mushrooms. Meals often started with delicate white soup, like the one served at the Netherfield Ball in “Pride and Prejudice,” and ended with a sugary rice pudding, a trifle with jelly, or something enhanced with a dusting of nutmeg, arguably the most fashionable spice of the 18th century.

Obsessed with money, status — and aesthetics — the Georgians also went crazy for pineapples. The Hermès Birkin or Lamborghini of the age, the pineapple was a status symbol imported from Barbados, or grown at great expense in special hothouses. They were often rented to aspirational hostesses to decorate their dinner tables.

It wasn’t just snobbery that informed cooking and entertaining. The era, which ran from 1714 to 1837 under the four King Georges and King William IV, was one of invention, experimentation and daring, too, with Georgians mixing all the foods and flavors flowing into Britain from America, the West Indies, China and India and the European Continent.

They paired salt and sugar in unconventional combinations; added candied citrus peel, currants and sugar to meat pies; made sorbets from artichokes or parmesan cheese, and pickled or boiled some of their foods to death for fear of rot or disease. 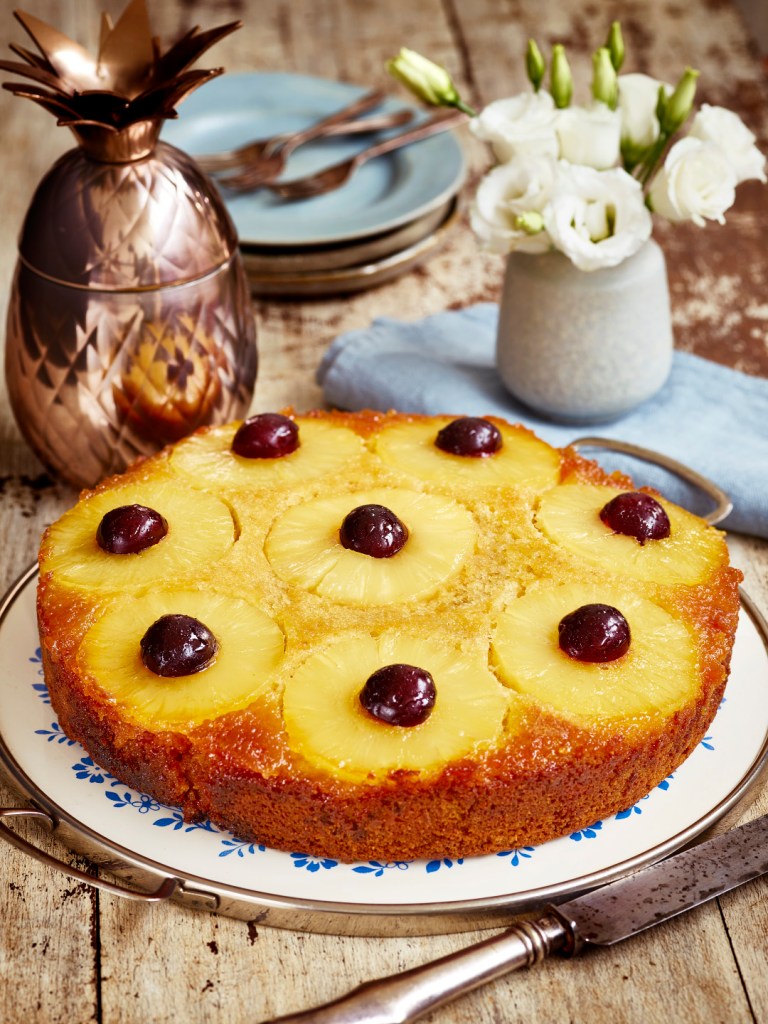 The pineapple was a huge status symbol in Georgian Britain because of its rarity.  Simon Smith for Sotheby's

It was also an age when household cookbooks began to emerge, and when people could hitch up their luxury carriages at the chop house for a meaty meal, or at the delightfully named Pot and Pineapple in London’s Berkeley Square for an ice cream en plein air.

The Georgians were the first to eat sandwiches, thanks to the eponymous, card-playing earl, take afternoon tea, following the habit of the Duchess of Bedford, who’d feel hunger pangs around 4 p.m. They also indulged in rich, steamed puddings with custard, like their German-born monarch, George I, who loved the dessert so much he was known as the “pudding king.”

The era was full of apparent contradictions, too. The Georgians were “clean” eaters and emphasized good nutrition, often using clear broths and soups as medicine. They were also passionate about sugar, which helped to preserve food and to mask bad flavors, but which also rotted the teeth.

In a tribute to this inventive — and elegant — era Sotheby’s in London has published “The Art of Cooking: A Contemporary Twist on Georgian Fare,” which layers on the colorful history, and rejigs some 18th-century favorites for 21st-century palates. The idea for the cookbook came from Clive Lord, senior director, chief operating officer Sotheby’s Europe, to mark the 275th anniversary of the auction house and honor its own roots in Georgian England. 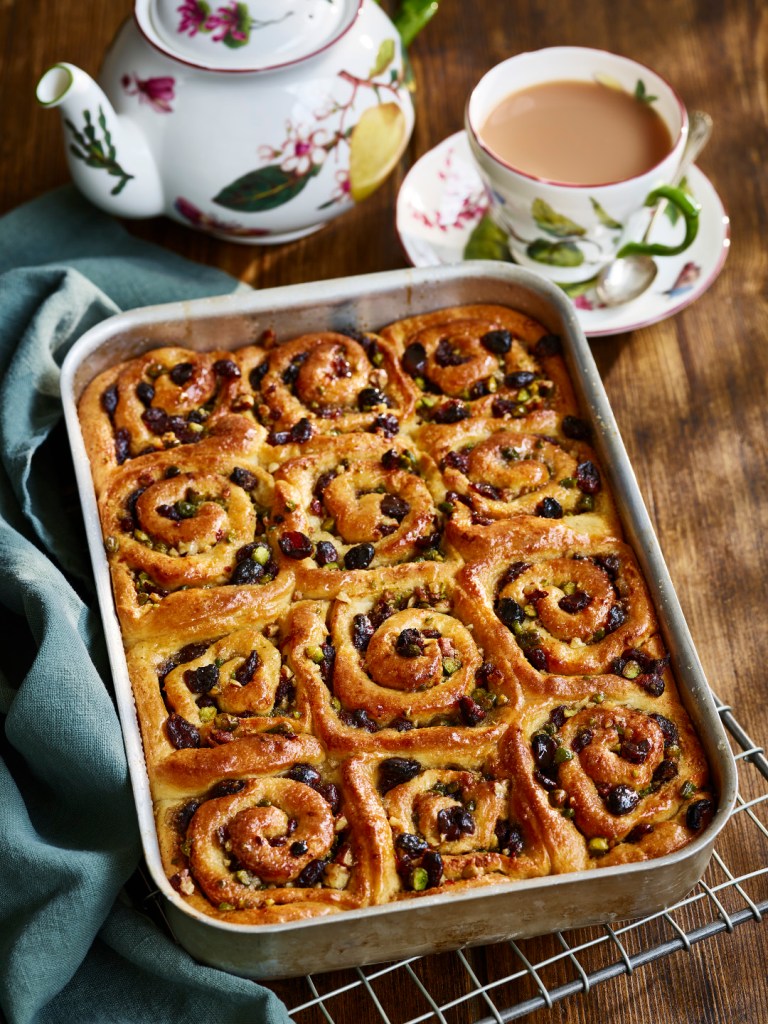 The original Chelsea buns were all the rage in Georgian Britain and really came from London’s Chelsea.  Simon Smith for Sotheby's

It was quite a challenge for Myles Fensom, head chef at Sotheby’s, whose daily menus draw a serious lunchtime and tea time crowd at Sotheby’s on New Bond Street. While the Georgians loved experimenting with recipes, they did have some odd eating habits.

“They were really paranoid about disease, and did anything to preserve food. And they got a bit over-excited about the ingredients,” says Fensom during a break before the lunch service begins. “To be fair, the food could be vile.”

He’s right: In 1724, the novelist Daniel Defoe wrote about taking a visit to the town of Stilton, and being served cheese crawling with maggots, which his hosts expected him to eat with a spoon. Bread was sometimes colored with chalk and bone ashes to make it look less moldy. The Georgians were also heavy-handed with sugar, which often obliterated the taste of anything it touched, and famously rotted their teeth.

He’s done grilled oysters with lemon, garlic, parsley and chili, and kippers on toast with capers and cornichons. “They used to get the oysters from the Thames. Back in the day, oysters were a poor man’s food because they were full of protein. Kippers were very cheap, too,” Fensom says. 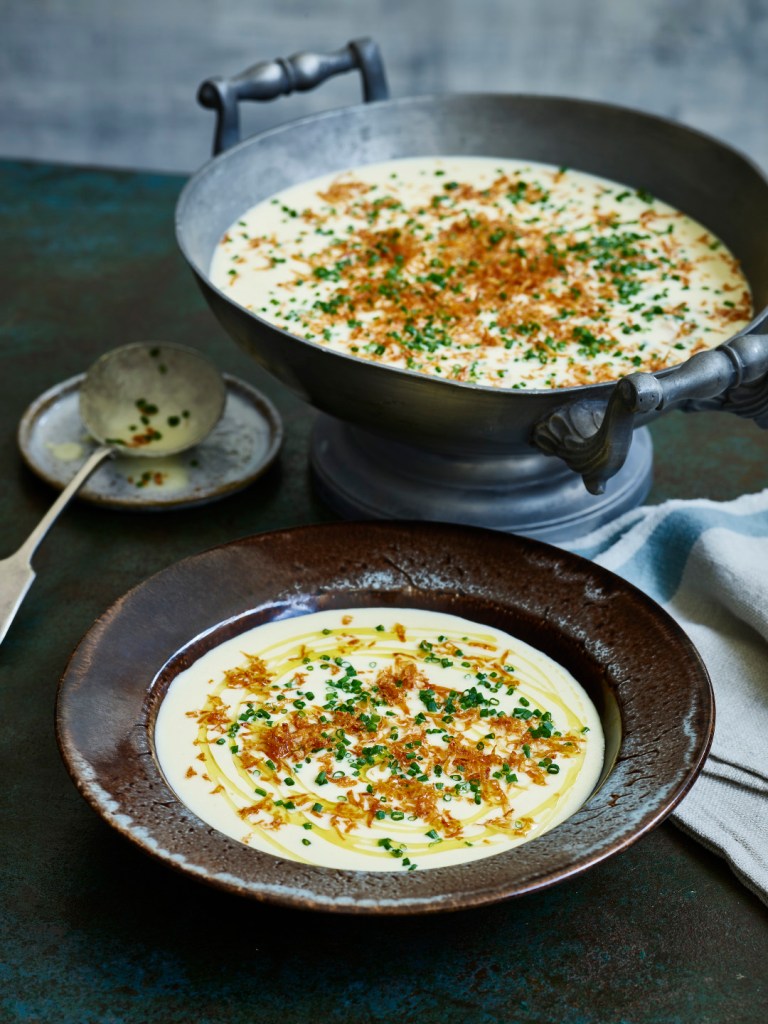 A version of this soup was featured in “Pride and Prejudice.”  Simon Smith for Sotheby's

He also put a big focus on fresh vegetables and legumes, with a recipe for roasted garden beetroot (still an English winter staple), curd and oats; asparagus (abundant in Britain since the 16th century) with Jersey Royal potatoes; yellow split pea soup, and baby leeks with deviled eggs.

Because the Georgians — and many European countries, still eat their animals nose-to-tail so as not to waste any bit — there are lots of barnyard treats, too: Sweetbreads with sweet onions; potted pig’s cheek, pickles and dripping toast, and mutton stew with suet dumplings.

“Sweetbreads are fantastic. They do taste just like chicken, to be fair. Make them with sweet onions, some sherry vinegar, some beef sauce, they’re really nice. I wanted to get it on the menu here, but it’s so difficult to do in a restaurant when you’re busy because you need a big army behind you, and you’ve got to cook it right,” he said.

The book is packed with desserts, as well, including an homage to King George I in the form of a steamed apricot pudding with custard. Of course, there is a lineup of fruit sorbets and ice cream, including a milk and cardamom one. “The Georgians were obsessed with ice cream, just obsessed with it,” says Fensom.

While he may have had to alter many classic Georgian ingredients and recipes, Fensom said he learned a lot from their approach to cooking and eating.

“It’s funny how now we can eat everything nowadays and we’ve got people going vegan. Imagine being in the 1700s and saying ‘Nah, I’m a vegan.’ It’s almost like we’ve got too much, and now people have sort of been going back to eating broccoli, lettuce and seeds. It’s crazy.”

He believes Britain has the best produce anywhere — with apples at the top of the heap — and says he tries to keep his menu at Sotheby’s as British as he possibly can.

“Seasonal cooking — that’s what it’s about. We’ve got some of the best ingredients in the world in Britain. The Spanish, the French all get their fish, pork, beef, lamb and sardines from us. We do some of the best crabs on the planet. People forget this because we’re too busy shipping it out. We’ve got to start championing our produce. At the moment, London is the best place to eat in the world.”

The Art of Cooking: A Contemporary Twist on Georgian Fare

a few cherries to garnish (optional)

Line the bottom of a 30 cm cake tin (if you don’t have one that big, use a 25 cm one, you will simply have a deeper cake) with a double layer of greaseproof paper, extending it about 5 cm up the sides. Make sure there’s no gap so the syrup cannot leak and spoil the look of the cake.

Heat the golden syrup, 20g of the butter and lime zest in a saucepan, over a low heat so it doesn’t burn, until melted. Give it a little mix to bring it together, pour into the cake tin, and let it cool for 10 minutes or so.

Then place the pineapple rings on top of the syrup mixture, pressing ever so slightly down: typically seven or eight rings. If you have any leftover pineapple, chop it up and put it in too, and set aside.

Make the cake mix by beating the sugar and remaining softened butter in a bowl or mixer till light and fluffy. Then add the beaten eggs, little by little, so the mixture doesn’t separate — I always add a little flour halfway through adding the egg to stop this happening. Once the egg is mixed in, fold in the flour, in two or three stages.

Now spoon the cake mix into the tin, and give the tin a few taps to settle it and push any air out so you get a nice even cake.

Cook for around 45 to 50 minutes. Check after 35 minutes by inserting a sharp knife — if it comes out clean, it’s ready. Remove from the oven and let it settle for 15 minutes or so. Once cool, take it out of the cake tin, peel off the grease-proof paper and rest on a wire rack. Garnish with cherries.